A Motorcycle Icon: Elspeth Beard at Flock to the Rock 2018

On a fortuitous night at a Seattle motorcycle event in 2012, my perception of riding took a sudden, life-altering shift.

A black and white photo of a young woman astride a 1970s BMW appeared on the big screen.

She leaned back on homemade motorcycle panniers covered in foreign stickers, one elbow resting on the oversized back box and a delicate hand with long fingers relaxing downwards. A mid-20s Elspeth Beard looked off into the London distance, in no hurry at all at the end of her two-year circumnavigation of the world—one of the first women riders to have completed that entire distance. And at Flock to the Rock in May, 2018, I would get the chance to see this motorcycle icon speak of her sojourn across continents, and once again marvel at the powerful photo. 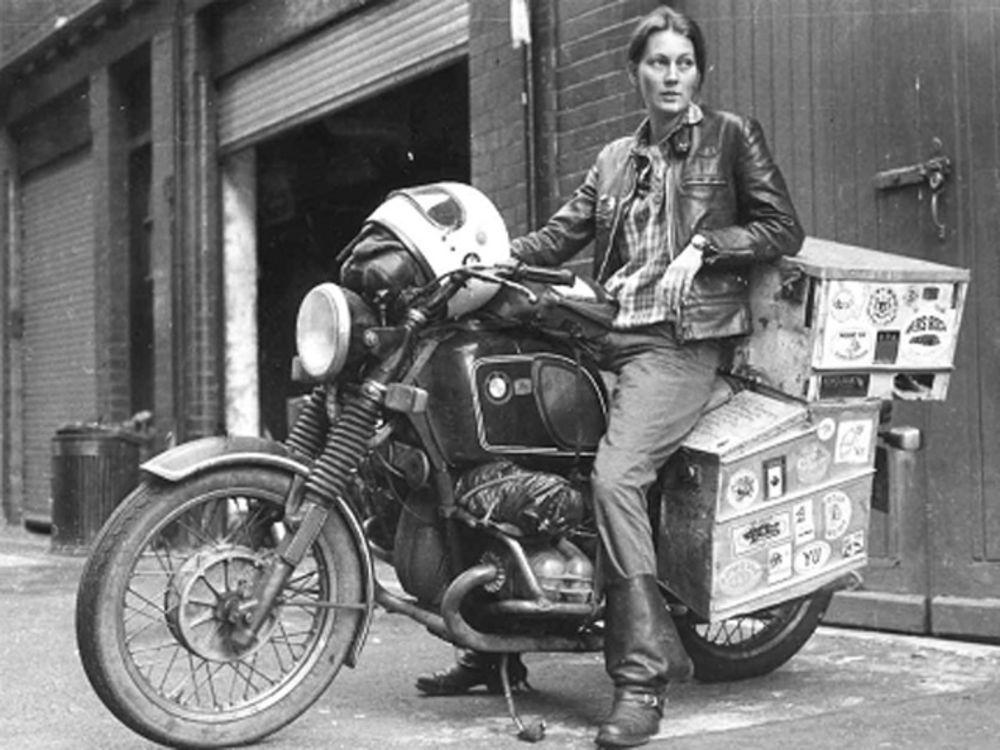 Before I became an overlander, or even an ADV rider, I was a 20-something year old myself, with a motorcycle I knew almost nothing about. I never expected much more than a little city fun and freedom from my first bike, and yet Elspeth’s photo struck a chord so deep it would very literally change the trajectory of my life. For the first time, the idea of riding solo across continents became a possibility, however hazy and distant. Elspeth’s story proved to be the irrefutable proof that a young woman, without a doubt, could manage just as well as anyone on the long and lonely road regardless of age or gender. This iconic photograph had sparked something so powerful, so real, that I—and likely countless others—would never be the same. It took the idea of girl power to a whole new level, profoundly changing my relationship with motorcycles.

When I heard Elspeth would be the keynote speaker at the annual Flock to the Rock women’s motorcycle event in Seaside, Oregon in May, 2018, I was eager to hear her story first-hand, but I also wondered if she could live up to the expectations of greatness. But as her talk unfolded, I was enthralled. And as the audience listened in rapt silence in some moments, and roared with laughter at others, it was clear I wasn’t alone; Elspeth wasn’t a motorcycle icon just because of a pretty photograph; She was a force of nature who exceeded all expectations with her independence, wit and humor, and her obvious ability to get her hands dirty and just make things work (Literally, since I think Elspeth can probably fix anything, anywhere, and has been known to dangle from great heights to fix masonry while very pregnant).

As she spoke candidly about her journey, it became clear that Elspeth’s story started out with the nasty trolling—an archaic typewriter/pre-internet variety—that’s exploded in the modern internet society. In response to her letters inquiring into potential sponsorship, the male writers and editor at a well-known English motorcycle magazine openly ridiculed her plan to ride around the world. 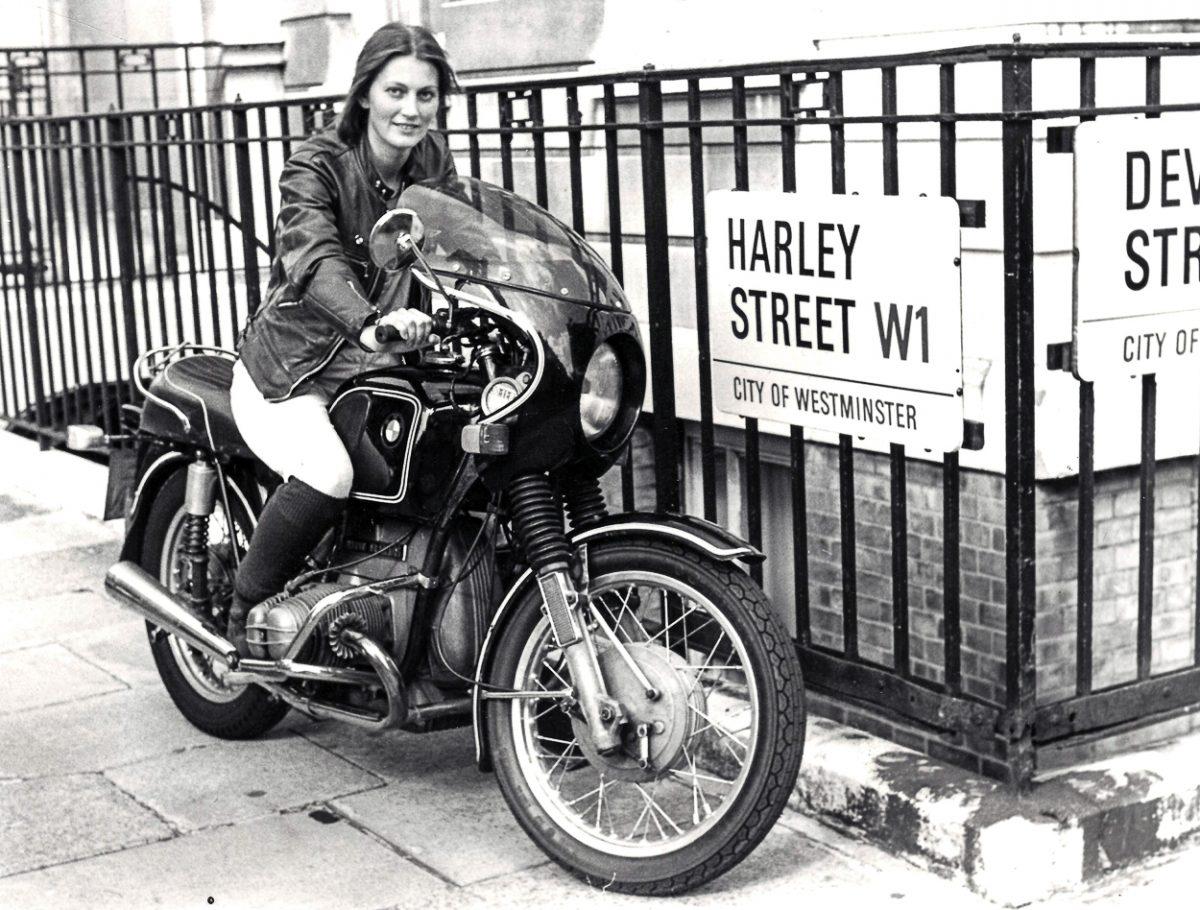 “Dear Elspeth, Brecon said he’d write this letter but he can’t ‘cos his tongue jammed his typewriter.

Mike Clements has already formed the Elspeth Beard Appreciation Society and wants to know where in the world you’re going to be so he can get there first.

Me? I’d like to offer you sponsorship around the world but I think that’d be a waste and a shame for London.”

When Elspeth read this letter to us, the audience at Flock to the Rock gasped at the blatant sexism and misogyny*. A second letter arrived from BMW, informing her that they already knew their motorcycles were the best, and they didn’t need to sponsor anyone. “It was a nice letter, though,” she recalled. “Very nice.”

The sexism didn’t stop her, though, and Elspeth set off to ride across the world. Her route? The United States, New Zealand, Australia (where some Outback pubs refused to serve a lil’ gal alone on a motorcycle), Asia and back to England via India, Pakistan, Iran and Turkey, a total of 35,000 miles in two years. For the final few months of her journey she rode with Robert, a Dutch overlander she met in Kathmandu (and the first overlander she’d met at all). When asked about him, she laughed and mentioned their “passionate time” and that she “had a very complicated love-life.” The women in attendance went wild, cheering her on and begging for details. “You’ll have to read the book!” she yelled over their cries. Oh, we will!

When she returned home to London, no one took notice of her journey, and after a period of the utter depression so common to overlanders ending a long adventure, she turned her attentions to other things. (A water tower remodel… She turned her attention to a freaking water tower remodel that’s pretty much the most amazing “house” I’ve ever seen. I continue to be in total awe of this woman. Now, how do I get myself one?)

It wasn’t until someone dug up the now iconic photo of Elspeth that people began to take note. And take note they did—To the point that her photo was illegally used and printed on t-shirts across Europe. And in the age of the Internet the photo went viral, and went on to inspire countless riders, myself included.

Elspeth’s story is one we would all do well to internalize, to learn from and seek strength from. Because no one is more deserving than she to be not just our modern female motorcycle icon, but our ideal of strength, prowess and intelligence across generations, cultures, and yes, gender.

Want to follow in her legendary tracks? Do it, and take it from her. “You never know your luck!” Grab yourself a copy of her new book Lone Rider, and take a listen to our podcast with Elspeth Beard, here! 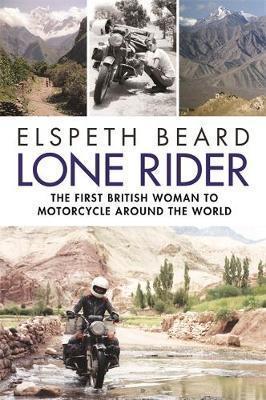 Special Thanks: A huge thanks to Ruth Belcher & co. for making Flock to the Rock 2018 such a successful event, and for bringing Elspeth Beard to us live. We can’t wait for next year, and hope to see all you women riders there!

*It should be noted Elspeth received an apology from the English magazine… Thirty years later.

A note from the Author: In 2012, totally inspired by the photo of Elspeth Beard, I walked into a BMW shop in North Seattle to check out one of their used bikes. The sales rep asked what I wanted to use it for, and I told him I was riding down to South America. My plans were met with a sarcastic, “Good luck with that! I’ve been planning that trip for 5 years!” before he turned on his heels to help what I can only imagine he felt to be a more “serious” male client (and yes, BMW, I’m still pretty miffed). Since then, I’ve ridden across half the world and 4 continents, on a series of non-BMW bikes. Thanks for the inspiration, Elspeth, and for leading the way for us all! 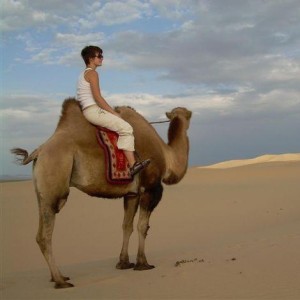