I think it’s pretty safe to say that most motorcyclists have at least two passions. Motorcycles, and that other thing.
For some people that other thing is welding, writing, mechanics, art, photography, medicine, the list goes on. When you make those two passions come together in some way, life seems richer, with an extra layer of devotion.

I like to think that I’ve been an artist my whole life. It was my first passion. So when I started riding, motorcycles began to influence my work. It was subtle at first, but then I began to spend more and more time trying to figure out how to sneak the spirit of travel and two wheels into as many projects as I could. I would draw everything from my engine to the many different places it had taken me. 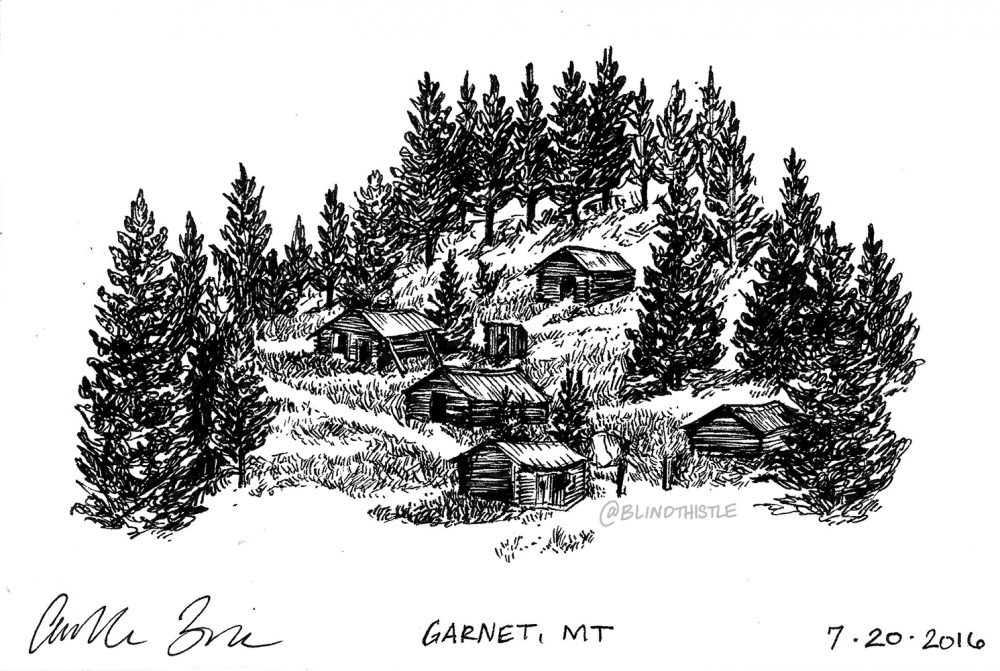 There is something very therapeutic about documenting these experiences and feelings in a creative way. So, when I had enough of my abusive job, I made the decision to quit and hit the road for two and half months. I made it my goal to document the journey in art and photography. I wanted to communicate the freedom of life on two wheels in a way that would inspire others, and also heal myself in the process of creating the work.

My vessel was my motorcycle and my tools were a DSLR camera, a small sketchbook, pencils, and ink. Making it a point to either draw or take a photo every day that could encompass my experience, forced me to absorb more of my environment. When you consider what you’re seeing as you roll down the road in terms of what would make a compelling image, you notice more. You see things that you wouldn’t have otherwise. I stopped at the top of a mountain to photograph a tiny Indian paintbrush, which I would have overlooked entirely if I had solely been focused on making it to my destination. I spent an extra hour wandering around and soaking in an old growth forest, waiting for the perfect light conditions to photograph in. It was incredibly peaceful there, almost meditative.

Stopping long enough to draw a piece of the scenery also opens you up to experiencing the locals. When I made it to Zortman, MT I set myself up to sit and draw a couple of the remaining buildings from the initial gold rush. I was only at it for 5 minutes before the first pair of locals drove by to ask me if I had broken down. Ten minutes later the next man drove by on a four-wheeler to ask if I needed help getting my bike started. Another five minutes and the man whose property the buildings sat on came by to wonder about what I was doing on the side of the road. Finally, thirty minutes after I had begun drawing, a group of people walked down to me—from the only bar in town—to drag me back so they could introduce me to everyone (and I mean everyone in town.) 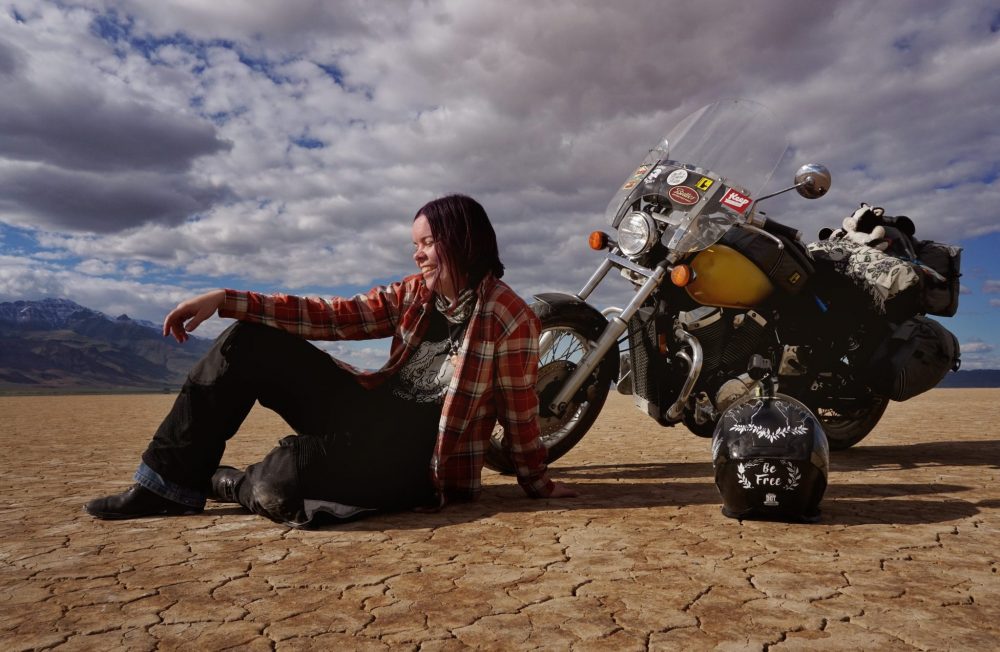 In Nevada City, while I was seeking the perfect spot to draw from, I met the amazing people at the Nevada City Living History Museum. I spent four hours talking to a man named Fritz until the Museum closed, then another four hours the next day dressed up in 1860s clothes discussing what life must have been like during the boom. It’s things like this that wouldn’t have happened if I hadn’t been taking the time to absorb my surroundings.

Traveling on a motorcycle and making art is simultaneously a gateway to and a result of experiences like these. Without encounters like these, the illustration or the photo doesn’t speak. The work doesn’t gain as much emotional connection as the pieces that have been shaped and influenced by interactions like these, or the emotions felt when looking upon something so awe inspiring while traveling on two wheels. I’ve connected with even more people through the sharing of my documentation of these incidents. People who recognize the feeling that the illustrations encapsulate, or have their own stories about that singular place that I photographed.

It’s a snowball effect. The more you ride, the more you find amazing people that inspire you to ride more and meet more people. These encounters then inspire more work that inspires others to reach out and share their experiences. It’s a beautiful circle, and when I’m traveling, I’m less stressed, the world makes more sense, and I’m more open to new ideas and ways of life. Traveling on two wheels takes those ideas and increases them exponentially because you’re exposed to the world around you. The smells, the weather, the people, the light. Everything.

Art and motorcycles are things that are inseparable in my mind. As much as the motorcycle can’t be separated from gas, combustion, or grease. 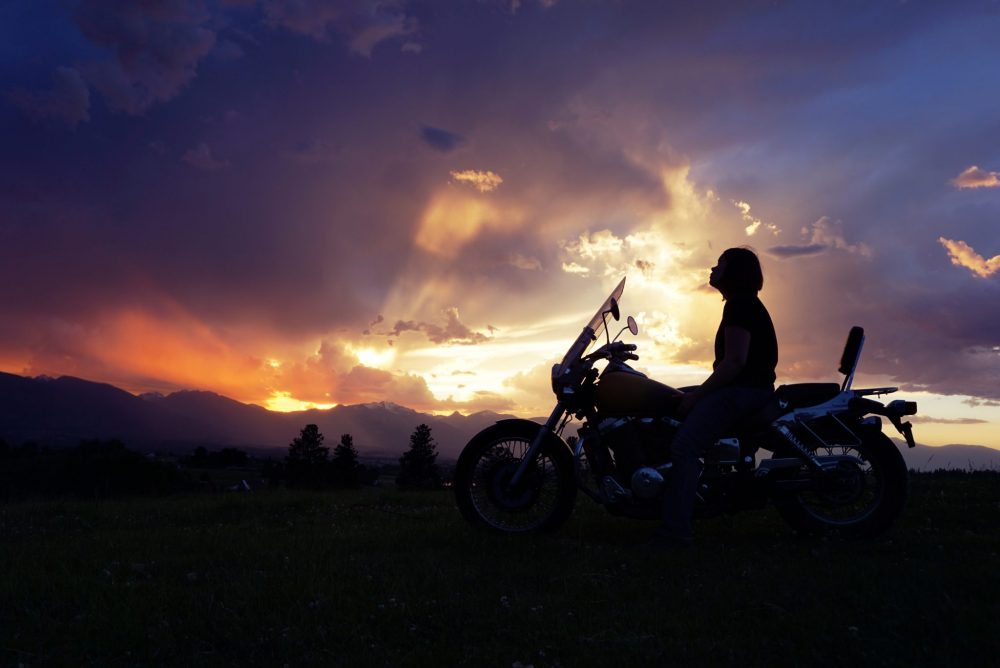 If you’ve never been to Montana, I invite you to come out to my ranch this summer and experience a little about what I’ve talked about here. Rocky Mountain Roll is a co-ed motorcycle camp out on my family’s ranch the last weekend of July. All motorcycles are welcome. If that sounds like something you’d be interested in, you can get more information and tickets HERE.