Charley Boorman: If My Daughters Wanted to Ride Round the World I’d Join Them

Charley Boorman isn’t just an actor, adventurer, and motorcyclist: he’s also a loving dad to daughters Doone and Kinvara, who can both ride a bike – and love going off on their own adventures.
I talked to Charley what’s it like to raise adventurous kids, is it possible to have a home-adventure balance, and who should do an all-female Long Way Round.

Charley, have you taught your daughters to ride?

Both Doone and Kinvara ride. I have a friend near London who teaches young kids how to ride little motocross bikes, so I asked him for help. When you’re teaching your own children, it can all fall apart quite easily! So it’s sometimes better to have someone who’s neutral and who would teach good technique from the very start.

Whenever I talked to Doone and Kinvara about bikes, they’d question everything. “Dad, you’re sure it’s really like that?”, “Yes, yes it is, I do know a little about bikes, you know?”. “But dad, you always fall off and break everything!”. That sort of thing, you know!

They aren’t actively riding now. But whenever we go to Ireland, to my old house there, I still have the first motocross bike I’ve ever bought – a Yamaha DT100 – there and they’ll ride that. It’s really cool, I’d be having coffee with my dad in the kitchen and the girls would go outside, chatting, and then you hear the motorbike start. And then they’re gone for hours!

Do you feel they’ve inherited the spirit of adventure from you?

I think, yes, they inherited my spirit of adventure. I got mine from my dad, a film director John Boorman who directed a lot of rather adventurous movies (Deliverance, Excalibur, Hope and Glory, Emerald Forest) in challenging places. So as a kid, I’d be dragged along to wherever he was filming. He loved that “tough movie making”, and interesting places – South America, South Pacific.… I always traveled because of that and I think my children have inherited that.

At the end of all my trips, I’d always have my wife Ollie and the girls come down and we’d go off on our own adventure on the way back so they could see and feel what I went through. And I think that stuck with them.

Doone is a qualified ski instructor, she’s done seasons in New Zealand and the Alps, she’s traveled all over Indonesia. Kinvara has worked in a school in Thailand and traveled the area.

Hopefully, they’ll travel for the rest of their lives!

If your girls came to you and said, dad, we’re riding round the world, what would you say?

I’d ask if I could come along! I’d probably recommend bigger bikes, but that’s just me. I would love to do it with them, but I’m not sure they would want me along, haha. I think it would be fantastic though! It would be awesome.

Last year, I was doing a tour in southern Africa – I do one every year where I take a bunch of people from Cape Town to Victoria Falls – and we were doing the Sani Pass, which is a famous mountain road for bikers to go. There are lots of stories around the Sani pass, how dangerous it is, and so on. And so we’re going towards it, and some of the riders are building up a bit of a worry about it and getting nervous.

There’s a pub at the top of the Sani pass, the highest pub in southern Africa – they make the best hot chocolate, ever – anyway, I look down and I see four guys coming up the Sani Pass on pre-1970’s Vespas, wearing shorts and tennis shoes and flimsy helmets having the best of time. So I said to my riders, look, if those guys can do it, anybody can!

How do you manage time away from your family?

Leaving your kids for a long period of time is always difficult and hard, especially when they’re young, but we’d always try to manage it so that when I’m gone, they’d be in school, busy every day. I’d try to work it out so that my trips would end towards their summer holidays,and they would come out and see me in Japan or South Africa, or Australia, have a good look around, then we’d meet up and we’d travel together. It’s always difficult to be separated from your family for a long period of time. It’s tough on them and it’s tough on me.

But kids just adapt to whatever’s there. I’ve always traveled, since they were born, so it’s just our normal.

How do you adjust to “normal” life when you’re back from your trips?

Adjusting back to normal life is tricky. I always get my wife and the girls come and meet me whenever I am. When Ewan and I did the Long Way Down, Ollie, Doone and Kinvara came down to Cape Town, a week early, had a good look around, and saw the sights. Then Ewan and I turned up, and I had four days in Cape Town with my family; on the way home, we stopped in Kenya and Egypt. That way, we had two weeks to be together, but in different, neutral places as opposed to me just going back straight home to domesticity, bills, and so on. By the time we got home, we were all connected again. And then it’s much easier to adapt. 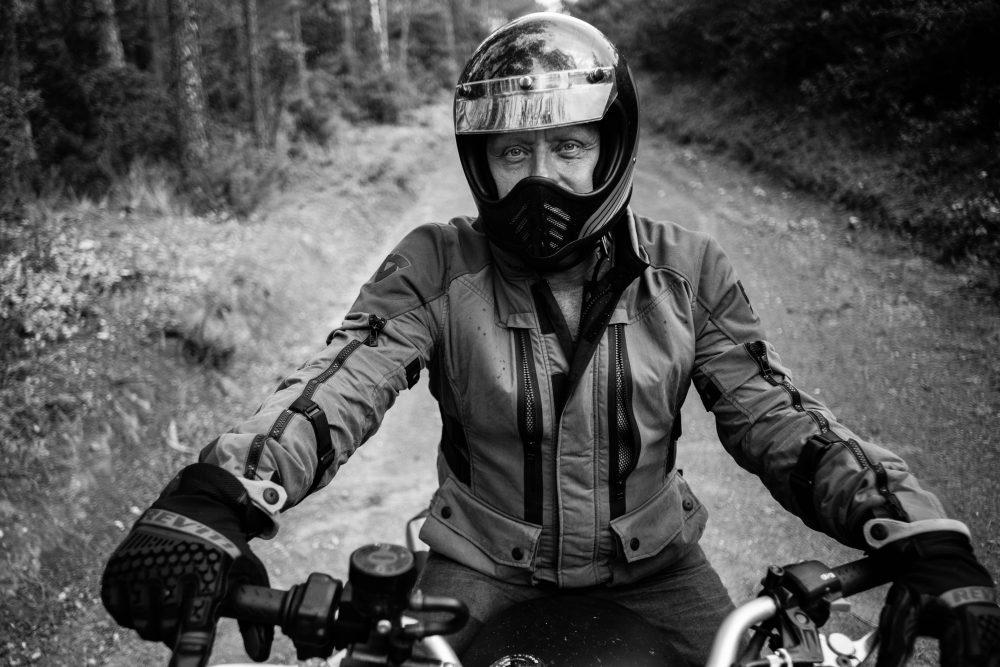 Whenever the trip is finishing, I’m really sad but at the same time, I’m excited to get back to my family – and start planning another trip, which is what keeps me sane!

If there was an all-female Long Way Round trip, who would be the best candidates to do it?

Whoever wants to! Wait, aren’t there women doing this already? I’m pretty sure there are.

I think if two idiot actors can do it, then anybody can, really.

I’ve got two female riders on my tour right now. Our riding is 85% off road and these two women are really very good riders. They’re super cool. I have female riders on the tour every year, and it’s awesome! 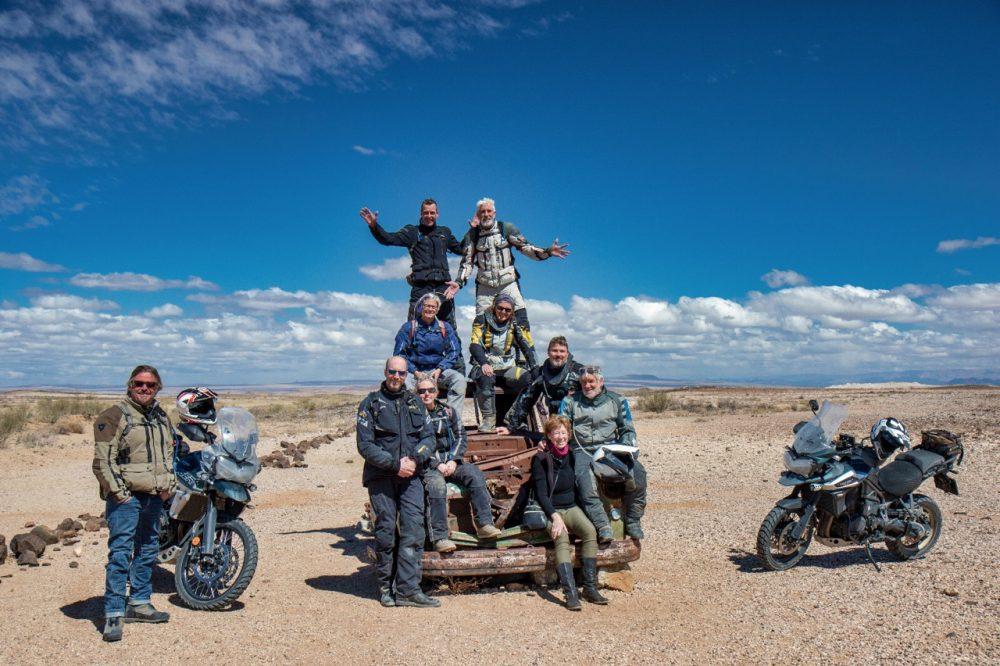 The reason we ended up making a TV show was, we figured that our first trip would take several months, and I just couldn’t afford it – I had a wife, two little children and a mortgage. So then someone came up with the idea of maybe writing a book and getting an advance for it. But I’m dyslexic and Ewan’s not much of a writer. So then, we figured we’d do a video diary and get someone to help us put the book together.

We were trying to get the show off the ground and we made a short pilot video. In Australia where Ewan was working at the time, we thought we’d pitch the idea to several TV producers and see if they wanted it.

The producers asked, okay, what’s going to happen along the way? We said we didn’t really know. And the producers said, well it won’t make a good TV show then, will it?

We proved him wrong. Anyone can do it. I think it would be really cool if this was done by an all-female team. Historically, there were always some amazing adventurous women, like Theresa Wallach and her African trip in the 1940’s.

Ewan and I got lucky that the show was successful. Before Long Way Round, my acting career was pretty much over. I was building people’s houses and painting them, my career was going nowhere. Long Way Round changed my life completely, but it’s also nice to know that there’s always somebody somewhere who’s doing what we did, right now – and it’s just super cool. The other day, we were on a safari and suddenly, there was a guy in another safari truck and who stopped and said, “hey Charley! I’m riding around Africa because of you!”.

It was brilliant! I’m sure that guy would have set off on that trip anyway. But it was just so cool.

Want to ride with Charley? Check out his adventure motorcycle tours in Africa!

PrevPreviousRiding Vietnam: A 1,500 mile motorcycle odyssey on two dirt cheap bikes
NextThe Benefits Of Knowing How To Use Your ToolsNext