Riding the Lagunas Route in Southern Bolivia only came up a few month ago, while I listened to the stories of other overland riders.

I knew from my backpacking days that it is a tough route and what I heard then only confirmed my memories. However, the challenge and the idea to revisit this beautiful part of the world intrigued me and rattled around my head the whole way down to Tierra del Fuego and up again to Northern Chile. 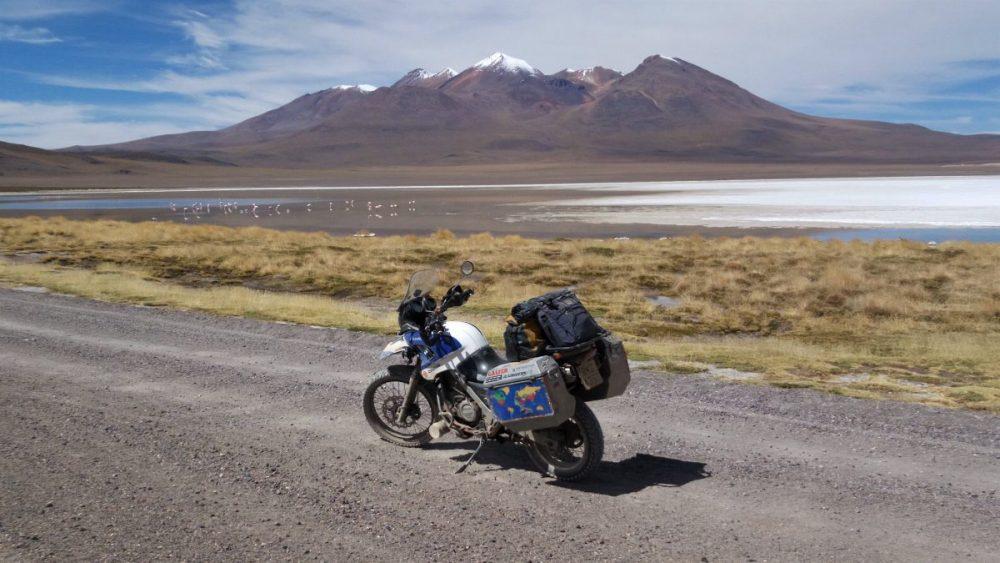 Whenever I could, I asked people about their experience and nearly every time I would get the advice not to do it on my own. So the closer I got to San Pedro de Atacama, where you can start the route or choose some other border crossings, the more restless I got. Should I dare attempt this ride alone? Am I a capable enough rider to handle the difficult conditions?

Bring it on, Lagunas Route!

As much as I wanted to do this, I had strong reservations. My biggest fear being long stretches of deep sand. Especially when riding alone, I usually try to stay within my abilities. And after a lot of back and forth, I therefore decided to give it a pass and rather take the crossing near Ollagüe.

Well, that was until the day before my departure… Feeling somewhat defeated, I couldn’t really let it go. I visited a couple of tour operators in town to get a better idea of the true road conditions. My thoughts were that these guys run tours multiple times a week- they should know if it is doable. Their info was a bit conflicting, but the overall tune was, it is possible to ride the route on a motorcycle. 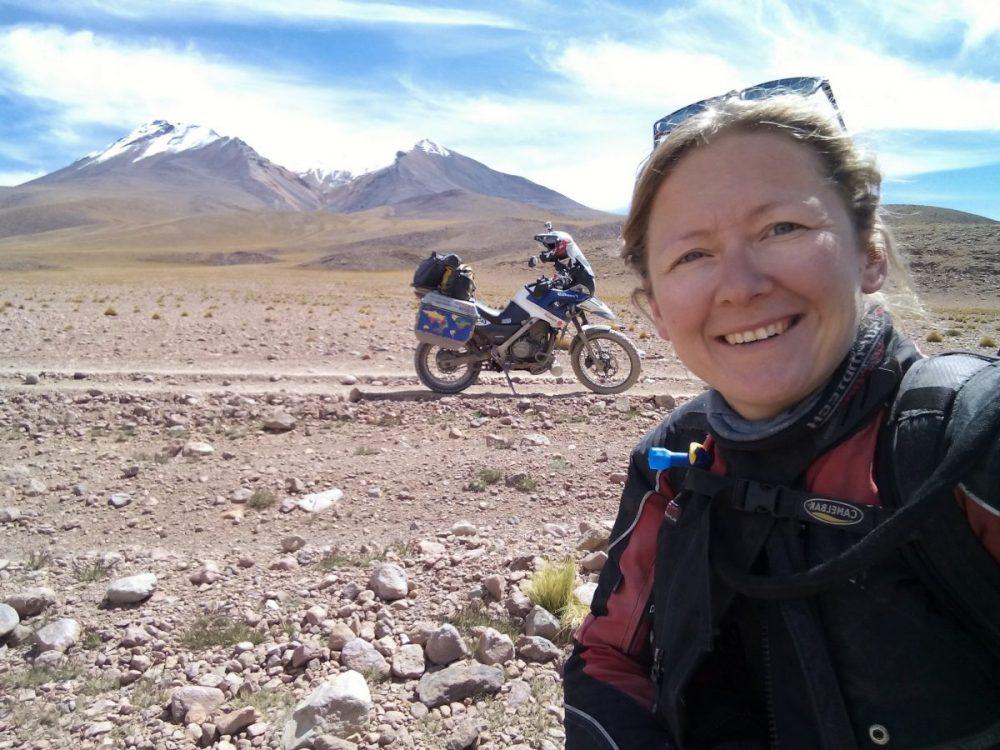 So I made up my mind again. I wouldn’t know unless I tried, and the next morning I set out to conquer the Lagunas Route. It takes you from 2400m in Chile to over 5000m on the Altiplano in Bolivia, most of it within 50km! The altitude can be a real killer and riding conditions are far from easy. But I was determined and excited.

After a leisurely ride up the Mountain Plateau I very quickly reached the Bolivian border at roughly 4300m, and it was time to say goodbye to tarmac and civilization. The border post is a crumbling stone house only to be recognized as an official building by the bright Bolivian flag waving in the wind, manned with only a handful of immigration officers who were very puzzled to see me and my bike. 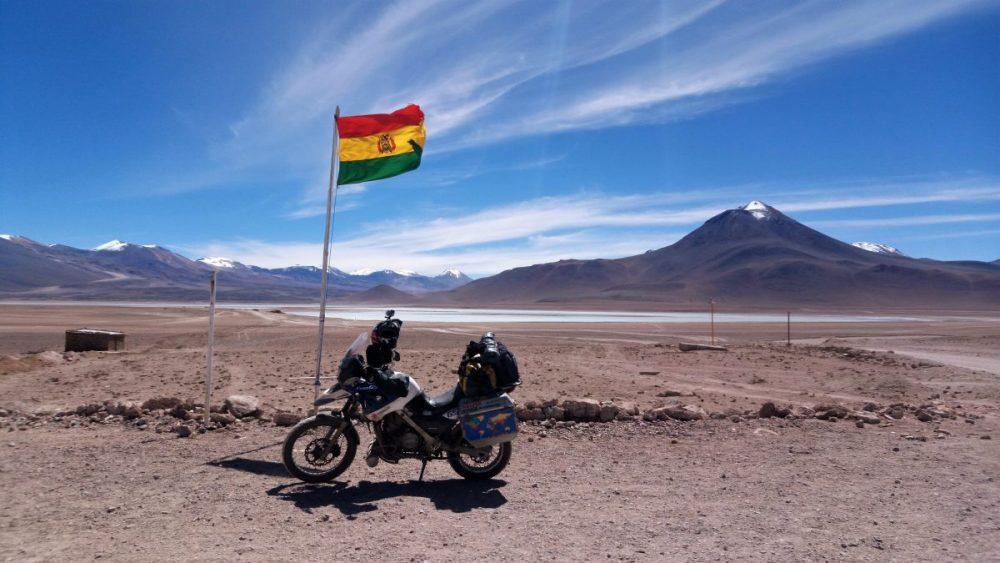 I don’t think they’d encountered many women travelling solo on a motorbike. I was promptly asked by one guy ”Why do you travel alone on a motorcycle? It is very dangerous. Aren’t you afraid by yourself?” My response: ”Should I be? Aren’t the Bolivians very friendly people?” That earned me a little smile and an ”Of Course!”

Well these guys were, and without any problems I got my stamp and my entry into this wild and beautiful country.

The next few hours I spent riding through stunning landscape. Though bare, still some of nature’s finest. I encountered sparkling lagunas, wide horizons and absolute silence once I turned my engine off. This was all accompanied by a sheer endless blue sky and a bright burning sun. With every kilometer I gained more confidence and started to enjoy myself more on the bike. It would have been absolutely perfect had I not suffered altitude sickness. Even though I came prepared and was sucking on coca leaves since the border, I felt the effects of the sudden change in altitude more and more. 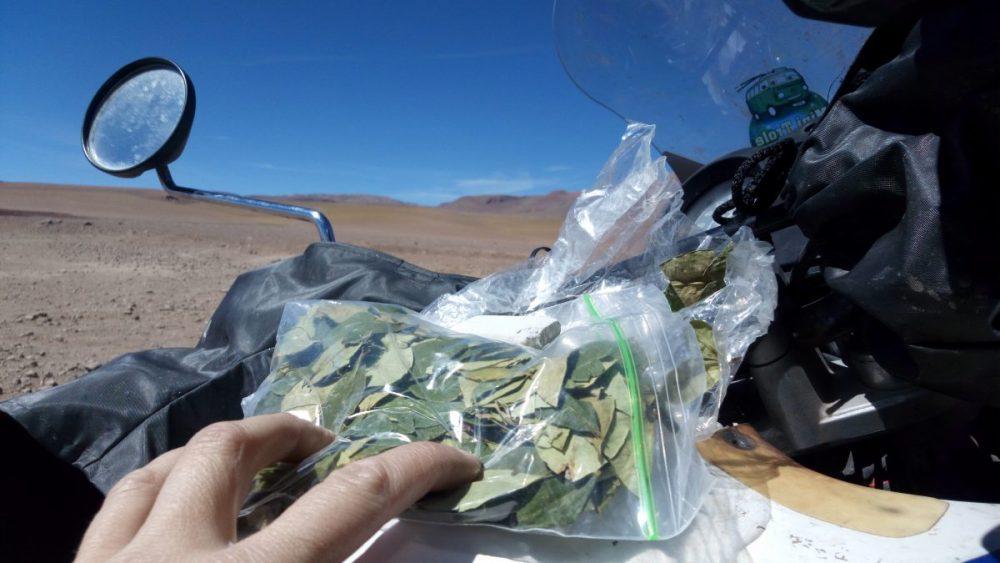 When I reached the customs building at 5,033m after 80km, I had difficulties breathing, felt very light-headed and could hardly understand what the customs official said to me in Spanish. My brain was running on power saving mode.

This also caused me to rapidly feel exhausted on the bike. After leaving the outpost and riding another 100km I was already looking forward to reaching the Laguna Colorada and call it a day. I was immensely tired. When I finally saw the laguna in the distance after 40 kms of graded dirt tracks, I felt total relief. My body began to relax in anticipation of a hot meal and comfy bed. However, the next hour would be the worst of the whole day with corrugations worse than I’d ever encountered. By the time I arrived at the accommodation by body was tense and aching. 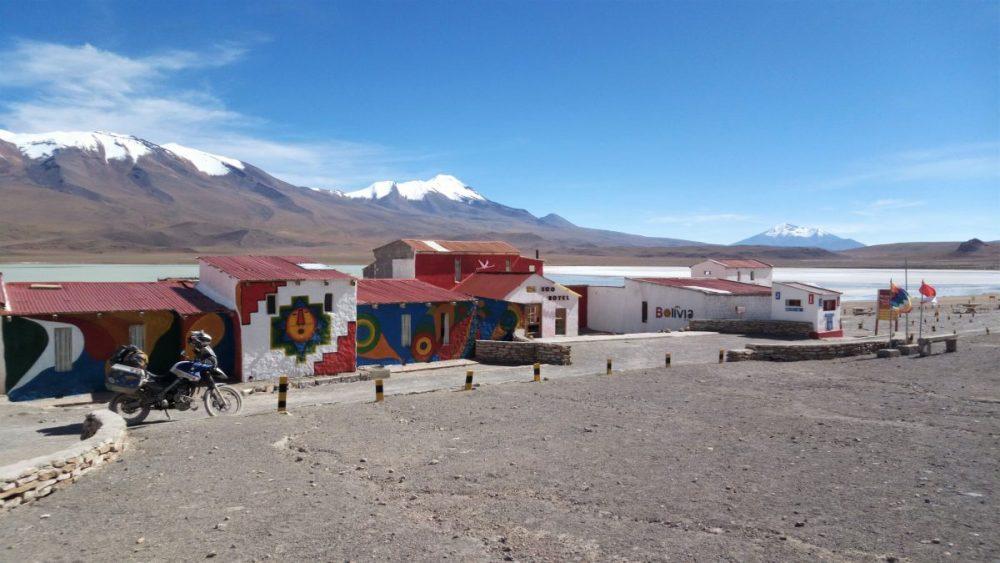 The next day was off to a rocky start. With the night’s subzero temperatures, my bike wouldn’t start and it took 2 hours to get it running again, only to drop it after 5km on a sandy patch. 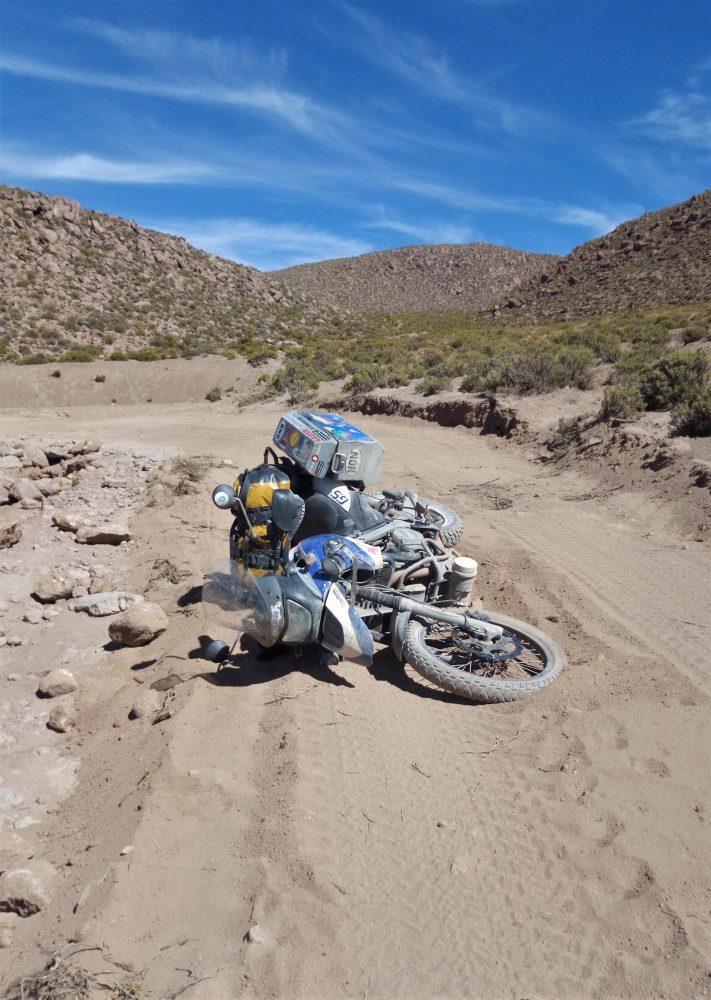 However my spirits were high, I had managed the day before, and my surroundings were absolutely breathtaking. I was hungry to explore and to test my limits.

The second day on the Lagunas Route matched all my expectations and provided me with much more. I had to face my fear of sand. Luckily the conditions weren’t as bad as I’d heard. I rode in deep tire tracks, managed some rocky sections and got my bearings in the bizarre landscape with its hundreds of tracks and turn-offs. I felt comfortable, focused and at the same time like a young foal bounding through a pasture. The further the day progressed, so did the rising sense of achievement and pride, which I tried to suppress as I hadn’t reached the end yet.

By mid-afternoon I stumbled across a cute little hotel in the middle of nowhere next to a beautiful laguna populated with flamingos sieving the waters. I had about 30 kilometres left to the main road, however I decided spontaneously to stay here for the night and enjoy the afternoon in this magical place. And good thing, as the following day would turn out to be the most challenging. 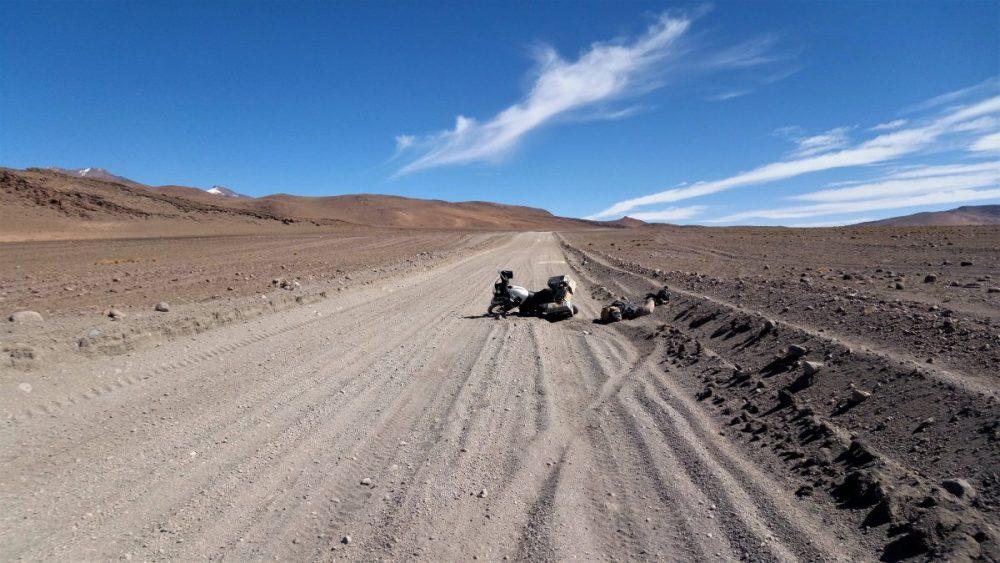 What was supposed to be a short ride to the main road turned out to be a wrong choice of tracks and having to push my limits hard through rocky terrain. With luggage, my BMW F650GS Dakar weighs roughly 220kg and is not easy to hold in line when bouncing over big boulders going up hill. However, going down was even worse.  And in the middle of it all I was faced with an ascent where I asked myself for the first time if I had bitten off more than I could chew. I got off the bike and walked up and down the path to find a way through and with every minute I got more worried. I was on my own. The journey to this point had been exhausting. I had no desire to turn around and find a different track. 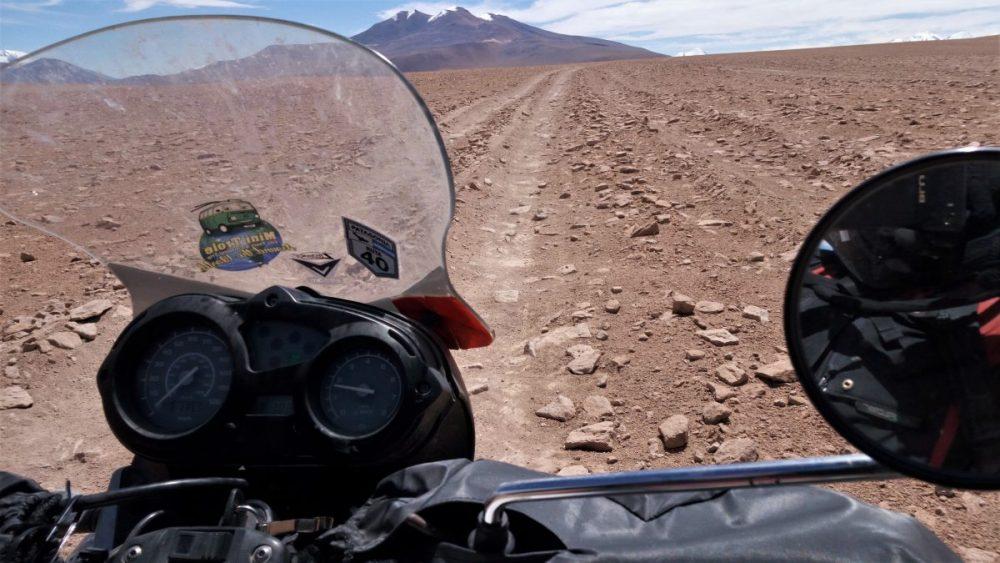 I had to ‘(wo)man’ up. I took my luggage completely off, meaning I would have to collect it later and carry it up the hill. And then my only option was to go for it. I opened the throttle and held onto the bike and to my big surprise, before I realized it, I had made it to the top! The joy I felt was nearly overwhelming.

But no time to celebrate, as the day was moving on quickly and so should I if I wanted to make it before dark. Ahead was still one major descent. I was lucky, as at that moment a tour group in a 4×4 came up and I was able to persuade them to take my luggage to the bottom of the hill as I managed the last bit of the hill section. I was completely exhausted. However, before I could reach the main road I had two more obstacles thrown at me. I crashed the bike again on sand the wrong way into the ditch on the side of the track, which cost all my strength to haul it out and then only a short distance ahead, because of not having paid attention, I bogged the bike. 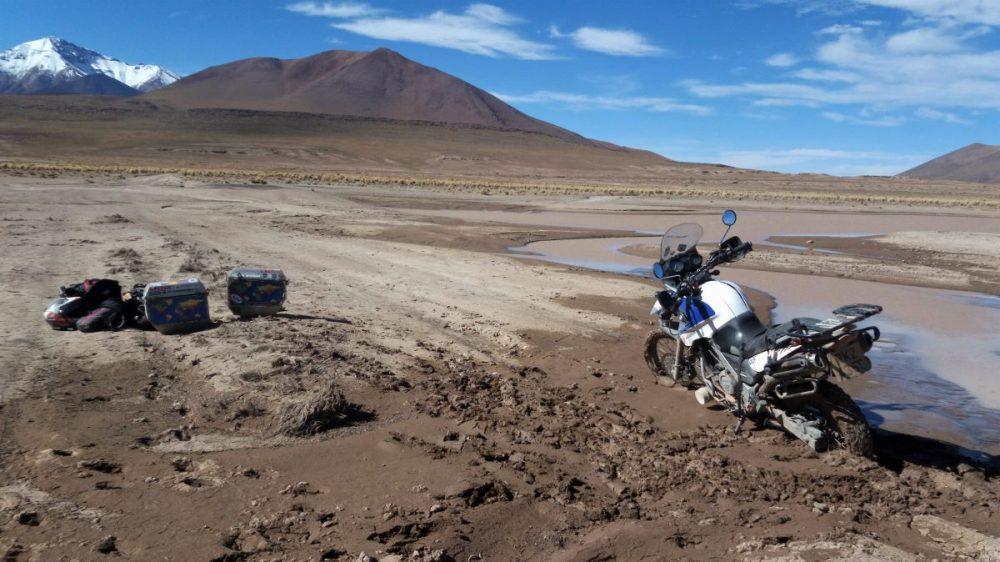 This was more serious as I was not able to move the bike a centimeter by myself. It was clay-like mud and multiple attempts to dig myself out failed. The road was only a kilometer away but for 2 hours there was nobody in sight. The sun was now setting and I was ready to pitch my tent and hope for help the following day, when out of nowhere this guy appeared in a tractor. With his help we had the bike out in no time and I could finish the Lagunas Route. 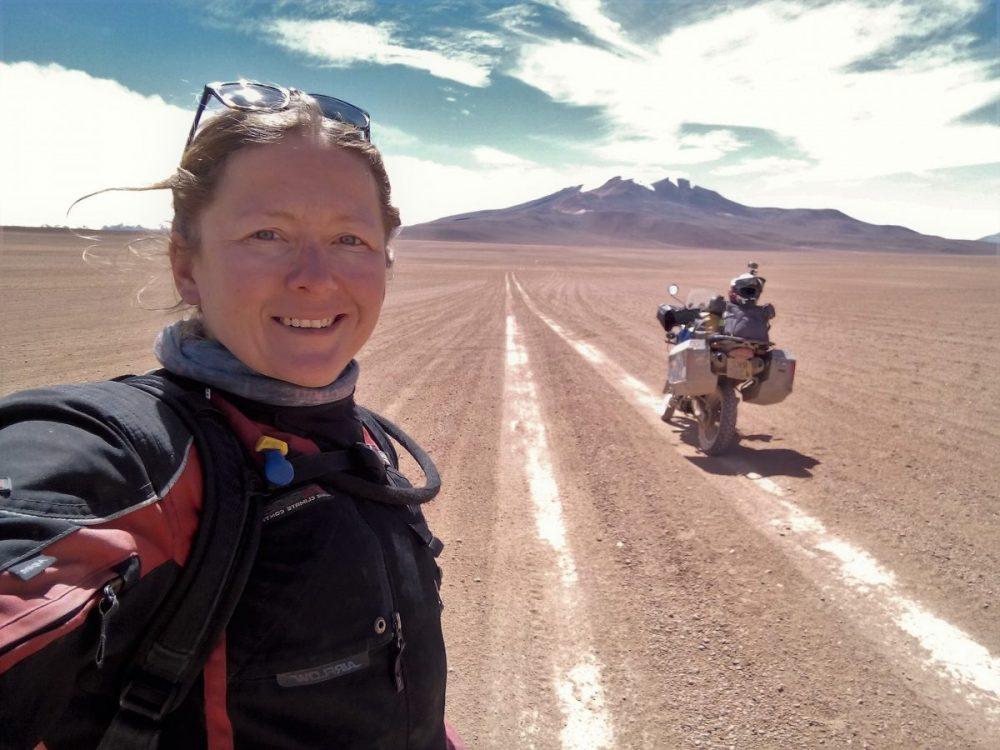 This was definitely the most challenging ride I have done so far and it showed me that I have come a long way as a rider in the last 19 months travelling in South America. Travelling solo is an intense experience at times and teaches you a lot about yourself, I am so glad that I jumped onto the opportunity. Now I can’t get enough of it!

Let’s see what the future holds….