Facebook shares with us the best and most beautiful of places, the smiling selfies and perfect sunsets of millions of travelers worldwide.

Yet the reality is the good and bad go hand in hand, and it’s usually only a half-shared story. And while many are unwilling to share the harder, grittier and scarier parts of these journeys, they’re an inherent part of the adventure. And they’re often not as bad as you might think.

We turned to New Zealand’s Danielle Murdoch to share stories and insights from her 45,000 mile Australia to Africa odyssey on a DR350. Danielle shared with us the truth about what life on the road sometimes looks like, and a few lessons learned, too. 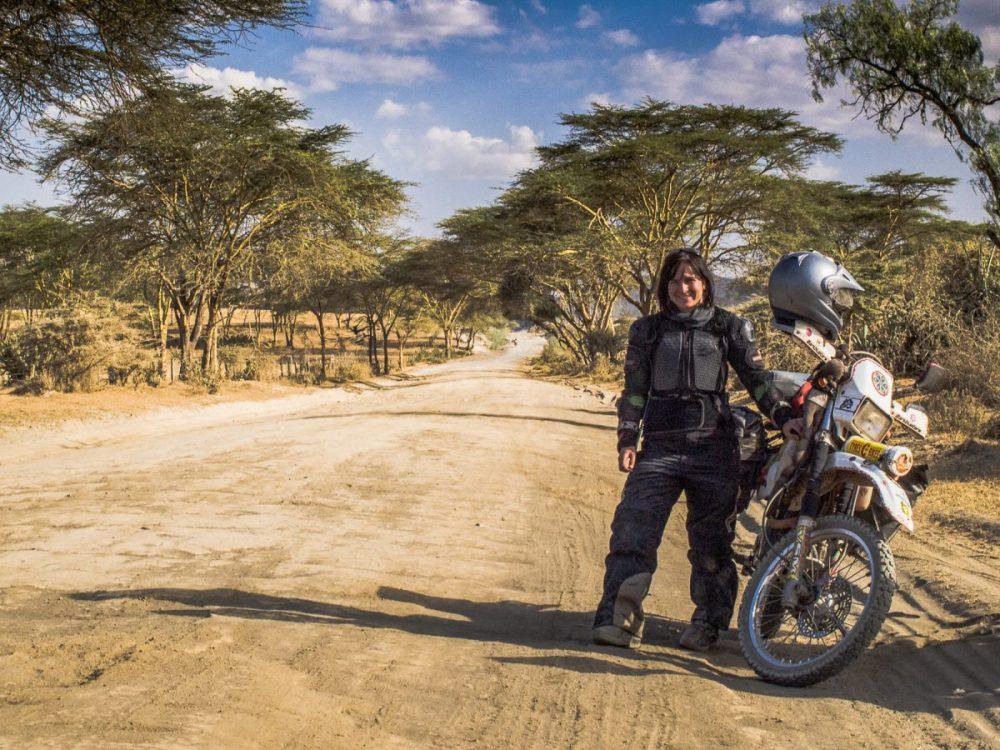 “It’s only sex”, Danielle told herself in a failed attempt at keeping herself calm. Her mind was a fog, heart pounding in her chest. “As long as he doesn’t kill me… Doesn’t hurt me… Drugs in the tea…” the thoughts coursed through her mind with the speed of whatever was in her veins, causing her to stagger and swoon towards the open door.

With war brewing in Syria, she’d waited in Pakistan for six months, exploring the countryside and getting to know locals. She’d poured over maps of the region, and didn’t take the civil war lightly. But after half a year, the unrest in Syria had only worsened. It was now or never, so she packed up her DR350, said goodbye to her new Pakistani friends, and headed for the Syrian border via Iran and Iraq. War or no, she’d have to risk it. She’d left Australia in 2010 with the dream of riding to Africa, and the time had come to continue the journey. Little did she know it would take four years, and change her life forever.

And now in a dingy Iranian courtyard, she reeled into the bedroom she’d been given for the night, slamming the door behind her. A taste she couldn’t quite identify lingered on her tongue. “What did he give me?” Panic crept up her throat as she locked the door. Staggering towards the second door to the room, she noticed it had no lock. “At least I’ll make it hard for him to get in.” Images of him shoving her limp body across the carpet floated through her mind as she slumped against it, sliding to the floor. The room was almost bare, save her jumbled belongings, sleeping bag and mat already laid out. She closed her eyes, images of what might happen searing her lids. Composing her thoughts, she reached into her pocket for her cell. “I’m really sorry to disturb you, but I feel as if I’ve taken a drug. Would your friend do something like that?” she fumbled with the letters, texting the owner of the guesthouse she’d stopped at earlier in Kerman, southeastern Iran. It was he who’d led her to the homestay she now found herself in, after all. She’d jumped at the chance to stay in a homestay, only to find no family within. No women to show her the home, no children running around the courtyard, no welcoming garden within the barbed stone walls. Just a man with a spare bedroom and a cup of hot tea. He procured a small amount of brownish goo, a “delicacy of the area”, he’d assured, which she politely sampled. She hadn’t eaten more than a few nuts and dates in hours, she’d realized. 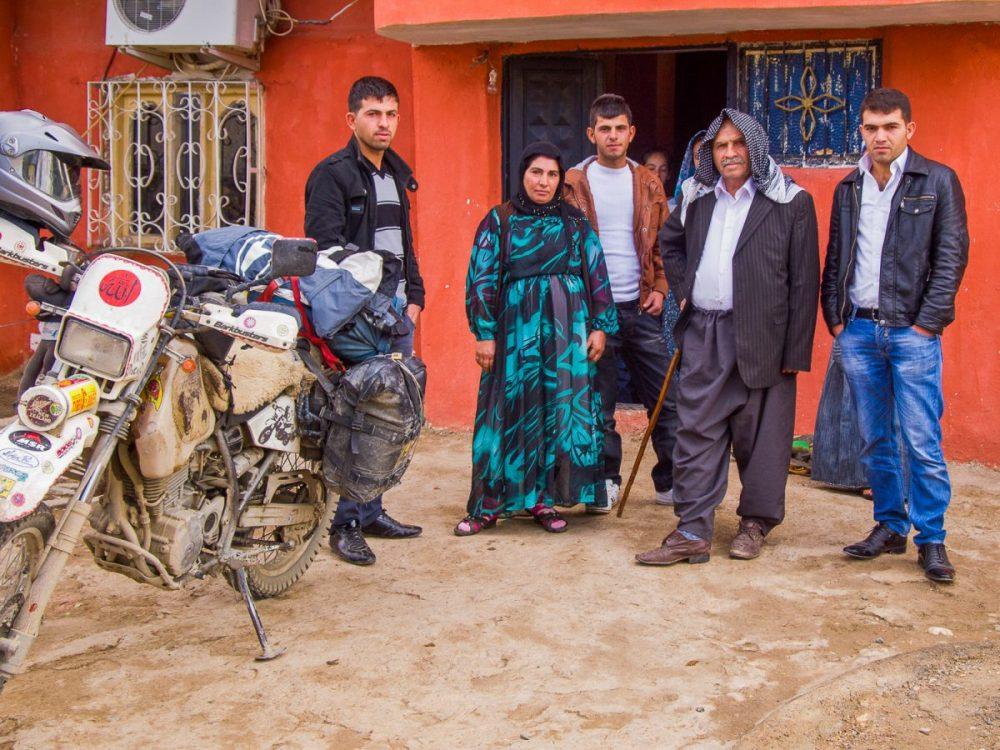 Time ticked by as she clung to consciousness. To her relief, the door at her back didn’t budge. From within the bare bedroom walls, she could hear him outside asking if she was alright, and wondered if perhaps she was reacting to something else. ”Am I sick? Is this an allergic reaction?”, she considered. Her host’s phone rang, but she couldn’t understand the Farsi he spoke from the other side of the locked door. Was it her imagination, or did he sound concerned? Her racing heart was beginning to slow, her breath normalizing.

As she lay slumped against the far entrance to the room, she could just make out the sound of a car pulling into the long drive. The owner of the guesthouse, coming to check on the young New Zealander.

In the days to come, Danielle would become friends with the would-be poisoner. She’d had an unexpected reaction to the delicacy, that brownish goo she never learned the truth of, but saw being sold freely in the markets. In a country where alcohol is prohibited, Danielle wondered if this substance was a replacement, a short-term high enjoyed by local women.

On her solo ride from Australia to Africa, it’s surprising how few times Danielle truly felt threatened. She’d had her close calls. She’d been groped by an Indian teen and harassed by men, or nearly been wiped out by passing vehicles. But mostly people were good and kind, and wanted to help. They wanted her to succeed. 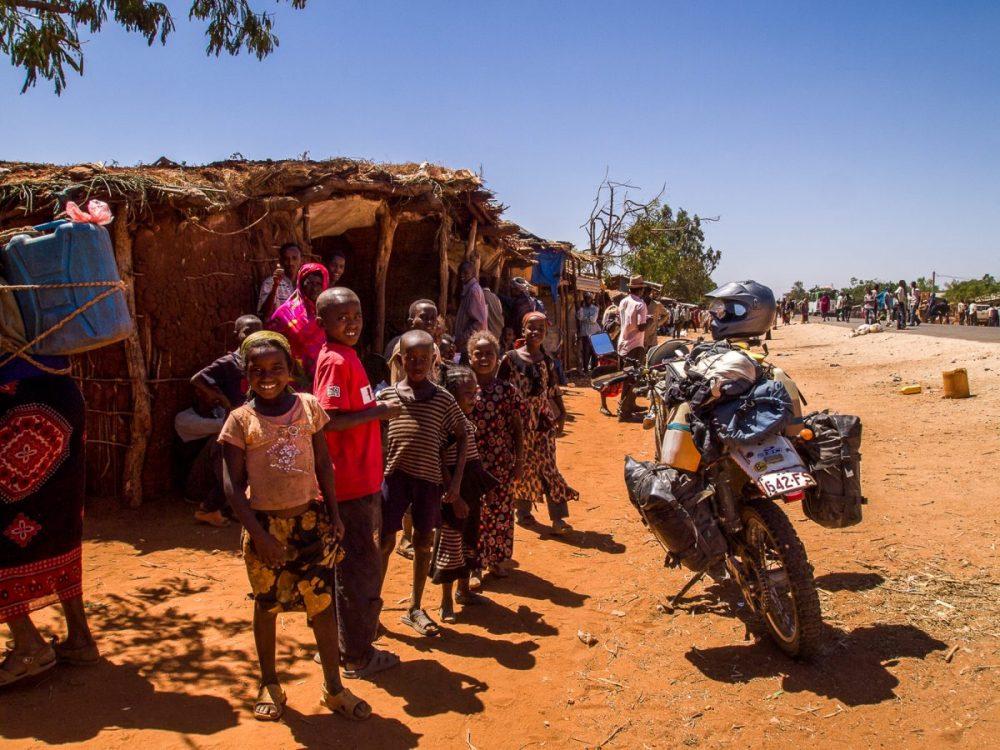 Six weeks later, Danielle waited with folded arms at the Syrian border, eyes on the group of young soldiers in front of her. “You’re a journalist!”, they’d insisted, looking for the evidence they needed to support their claim. “Like I said, I’m not a journalist”, Danielle protested, nervous but eager to continue her voyage and get to the African continent. If she couldn’t cross through Syria, her Australia to Africa ride was going to have a long detour. This was her best option. Get through Syria in two days, and do it before the war worsened. The contraband hidden within the armored pocket of her jacket didn’t help her nerves. It was stinking hot, but she couldn’t risk taking off her riding jacket, her laptop resting heavily against her spine, camera rolled up in a dirty pair of socks… “What’s that in your jacket?”, one asked in broken English. “Armor”, she said, shrugging down her jacket for them to see, then tapping her knees for the thud thud that always brought interest. “In case I slide- crash”, she added. Everywhere she went, locals loved when she tapped her knees, marveling at the Westerners protective gear.

As they searched her bike and panniers, she was cautious not to cause more alarm than her mere presence had already done. They weren’t used to seeing a woman roll up on a motorcycle anytime in Syria, let alone during these troubled times. One held up a pair of her panties for the rest to see, laughing. Though normally this was a particular item they would avoid, they were getting a kick out of it. What did she care, though? Let them laugh, so long as they let her through. One examined her bag of tampons, clearly confused, and turned towards her. Danielle sighed, trying to explain in gestures and sign language. Hands at crotch, she signaled something she could only hope came across as stuff comes down, stuff goes up, miming the art of plugging up mother nature while trying to maintain dignity. An older man- middle management- she decided, saw the trouble from the window and came out, yelling at the younger men who immediately sobered up, handing over her personal items. “I lived in Germany”, he said, giving her a knowing look… 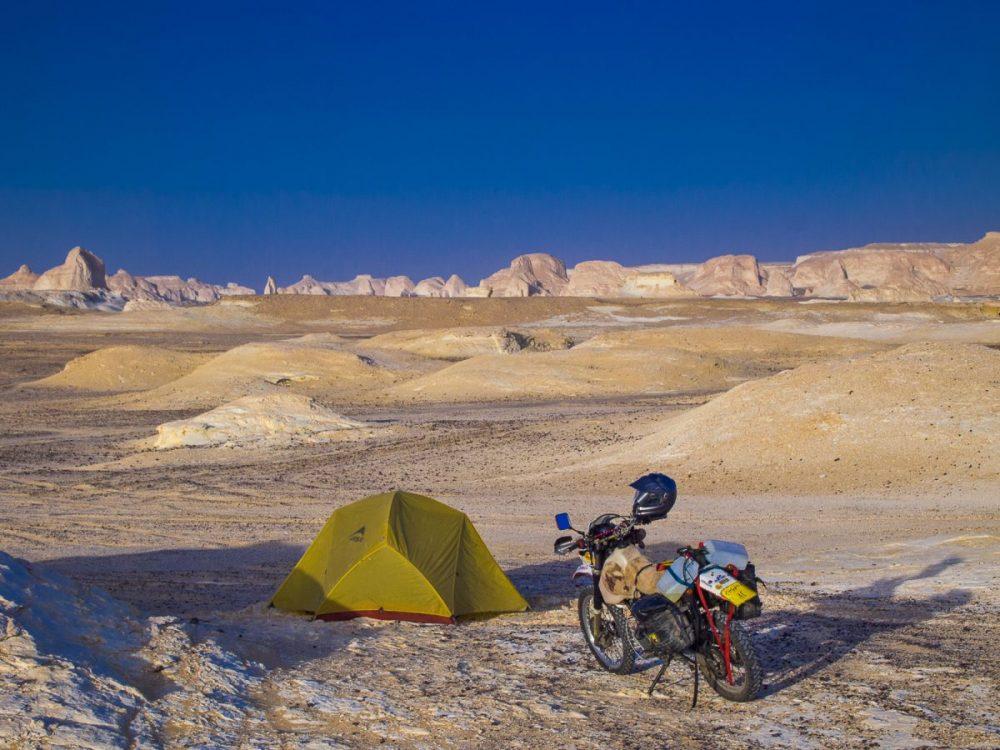 She clutched a small pouch containing passport, a stack of US dollars and credit cards. Her “grab bag”, she’d described it. “If you have to run, that’s the bag you grab”. She was sent to the man in charge, who extended an open palm. Grudgingly, she passed over her most valuable of items. He unzipped the bag, carefully examining every card, every receipt, every random bit of paper, passport page and item collected on the way, counting out the $1,000USD. He eventually slid her passport over the desk and zipped everything else back in. But instead of handing the bag to her, he tucked it inside a drawer of his own large desk. Danielle stifled a sigh, wondering how much this crossing was going to cost her. With no choice, she proceeded to complete the long visa process, not knowing what would come of her possessions and cash.

At the end of a long day, Danielle walked back to her motorcycle, having been granted permission to ride through Syria. Unlike everywhere else she’d been, there were no hagglers here, no other tourists, no one hoping to score a buck by watching her bike. She looked around, wondering how to get her grab bag back, when the head man walked towards her, handing over the bag. Her breath caught as she unzipped it to put her passport back in, glimpsing the cash. How much had he taken? She couldn’t count it in front of him, and saying goodbye, rode into Syria.

A few miles down the road, Danielle pulled over and unzipped her bag, counting the crisp bills. Relief washed over her: $1,000 dollars nestled neatly within. 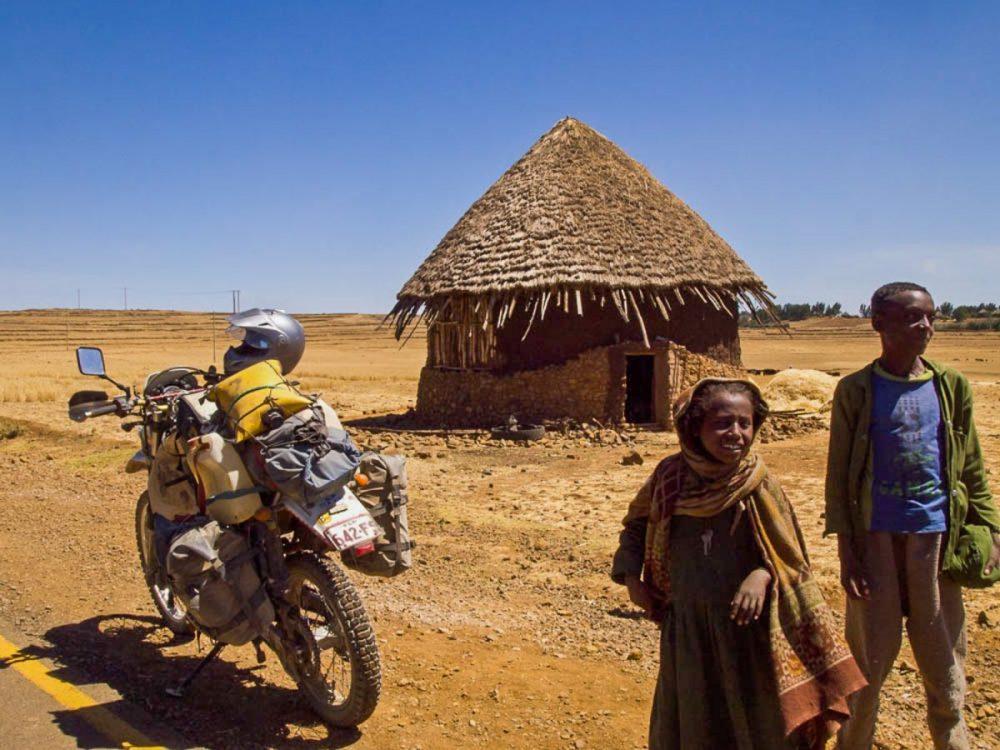 Danielle, can you tell us a bit about the journey, and what it was like riding as a solo female?

Despite being a woman, alone and on a motorcycle, I managed to navigate my way through the cultural differences of dozens of countries. In Iran and Iraq, it’s against the law for a woman to ride a motorcycle; I was bullied by police escorts, given a local delicacy that turned out to be a hallucinogenic, slept on the floor of police stations and enjoyed the company of some amazing local families.

By 2011, I began the African section of my long overland journey, just one week after a large group of protesters were massacred in Tahrir square. I could only hope the political unrest wouldn’t follow me as I made my way south through the east coast of Africa. While I was shown a good amount of respect in the Islamic countries, I was surprised at the treatment I received in Christian countries. In places like Pakistan and Iran, and Islamic Africa, I was often seen more as a sister or a daughter. In Christian Africa, I was seen more as an object of sex, and wasn’t prepared for it.

I had a major motorcycle breakdown and was towed 760 kilometers by another motorcyclist through the jungle from Tanga, Tanzania to the nearest mechanic in Nairobi, Kenya (believe it or not, this was a short cut!).

In October 2014, four years after I left Brisbane, Australia, I surrendered my beaten up motorcycle to customs in Victoria Falls, Zimbabwe. In the end, I traveled through twenty seven countries, had eight motorcycle breakdowns (once in the most dangerous part of Pakistan, where I wasn’t able to leave the hotel room and had to wear local dress the entire time), I punched an Indian teenager for groping me, was inadvertently drugged by a cup of Persian tea. I traveled through multiple war zones, and even found a husband at the end (that nice motorcyclist who towed me across an entire African jungle!) 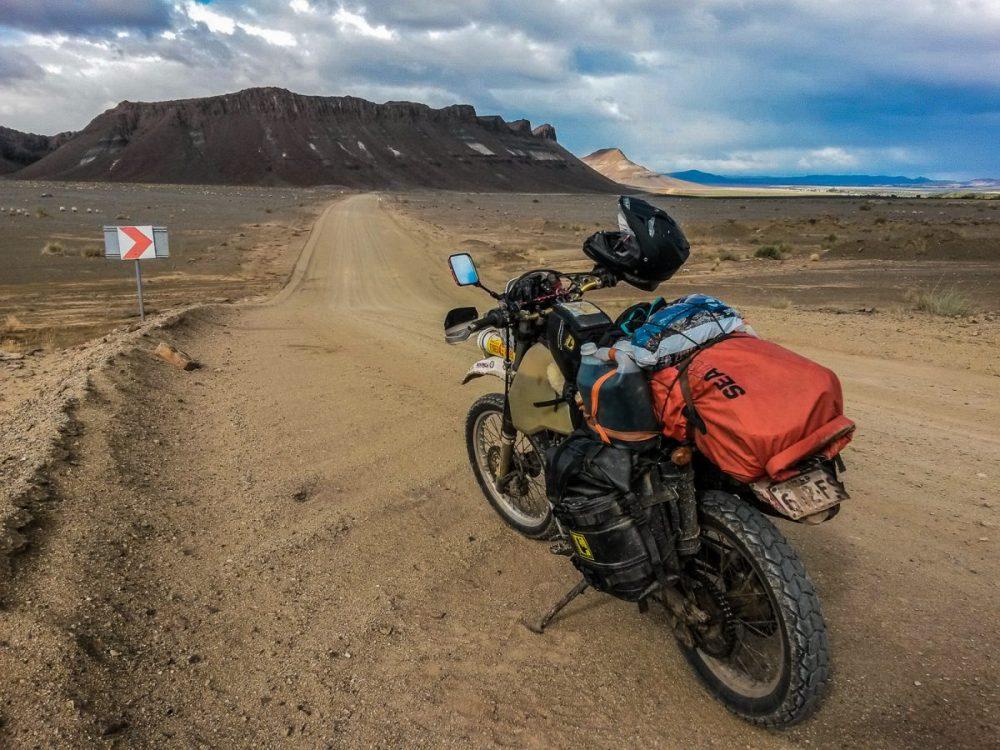 What were some key lessons you learned along the way?

Danielle Murdoch was awarded Young Adventurer of the Year from Australian Geographic in 2015. Check out her blog and sign up for news about her upcoming book: Moto Monkey Adventures