Amsterdam to Bali On a Whim and a VStrom

Dutch explorer Nora Nijkamp is on the road to Indonesia, solo. This summer, she quit her job, rented out her apartment, packed her bike and set out on a journey across Asia.

We caught up with Nora in Varkala, India, while her bike Zuki (a Suzuki VStrom DL650) waited in a hotel lobby in Kathmandu. Nora says she’s resting up before hitting the road again after Christmas and riding her bike to Bali, Indonesia.

At only 29, Nora defies most of the conventional ADV motorcyclist stereotypes: she only got her motorcycle license in 2015, she refuses to plan anything more than a month in advance, and she couldn’t tell a Triumph Tiger and a Ducati Multistrada apart if her life depended on it. Yet, she’s already covered more miles than most, and explored places few solo riders dare to venture: from her adventures in Central Asia and Iran to crossing part of Pakistan with a police escort, Nora says it was all more than worth it, and claims it’s all about perseverance and flexibility. 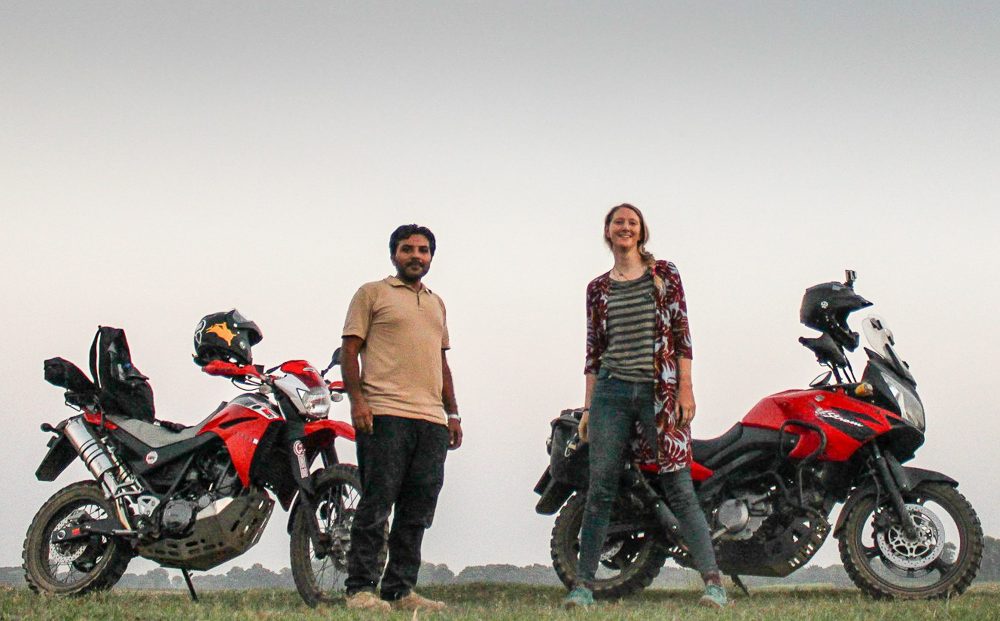 “In terms of planning, I did get my Russian visa sorted in advance as that seemed to be one of the most important things. Other than that, though, I simply packed my bike and left – I prefer to learn by doing rather than researching and theorizing; I’m excited to experience the unexpected, and I’m just curious about what’s around the corner, over the mountains, and in the next country”, says Nora.

Nora is an avid vlogger. Despite being on the road, she produces a video a day for her Youtube followers. She says she doesn’t have any expectations to turn her vlogging into a business, though.

“My previous job at IBM was pretty well paid, so I managed to save around a thousand Euros a month for two years which now allows me to travel. I figured I’d be on the road for a year, although I don’t limit myself with strict schedules – if I feel like staying in one place longer, I do. If I feel like leaving sooner, I do. Accordingly, I think my budget is probably going to be overstretched. I do monetize my videos to a degree – it brings in about 60 Euros a month – but it’s not exactly a reliable income source! There are lots of different ways to fund your travels, though, like picking up jobs on the way. In the end, it’s a very individual preference.”

She says she prefers vlogging rather than a traditional blog or website because you can’t go back and edit anything – once it’s out there, it’s out there.

“For one thing, I’m not very good at writing. For another, I think vlogging helps me learn a lot about myself as well as keep the ride report honest. Instead of putting a year’s adventure in a well-edited, polished five-minute video, I prefer to keep a video journal. It reflects the reality of travel and shows both the highlights and the downsides. It’s more authentic this way. It’s been a great learning curve for me, too – I’ll admit I do cringe at some of my early videos! But again, learning by doing works best for me, and there’s always room to improve.”

Nora says she’s never been an activist in terms of feminism: she’s definitely pro-equality, but she admits she never felt the need to express her feminist feelings in any significant way. All that has changed after she visited Iran. According to Nora, women’s rights issues are extremely important in traditional societies.

“I know it’s not up to us Westerners to decide whether the women in Iran are happy or not. But they definitely are oppressed, and it’s not just my opinion or impression – I didn’t film my conversations with local women for their own safety and privacy, but probably more than 80% of girls I talked to hate the hijab and detest the fact that they have fewer rights than men. In fact, some people have even confessed they were atheists and loathed the rule of religion over state. I did a lot of Couchsurfing and stayed at quite a few people’s houses, and everywhere I went, as soon as the women were inside, the hijab would come off, uncovering their beautiful hair, and they would change into shorts and skimpy t-shirts. So it’s not that I was personally inconvenienced by not being able to swim in the ocean with a bikini and had to cover up from head to toe; the local women and girls aren’t exactly thrilled about it, either.”

She says she was especially shocked after spending a few days with women in rural Pakistan. According to her, these were wealthy, educated people, yet the women’s roles were still restricted to child rearing. “I’m not talking about people living in poverty here – those girls had servants, maids, cooks, their families owned several houses. Yet, even though they were my age, they already had three children each. And although they dreamed of different things, like getting into sports, they said they would bring their daughters up to be obedient housewives, too, because if the girls were ambitious and independent, it would be very difficult to marry them off. It was just mind blowing and sad. I know it’s not up to us Western travelers to compare or judge, but the contrast between the Western and the Iranian or Pakistani women is just incredible. I don’t want to assume these women are unhappy, though. We live in different realities, and it’s a very complex issue.” 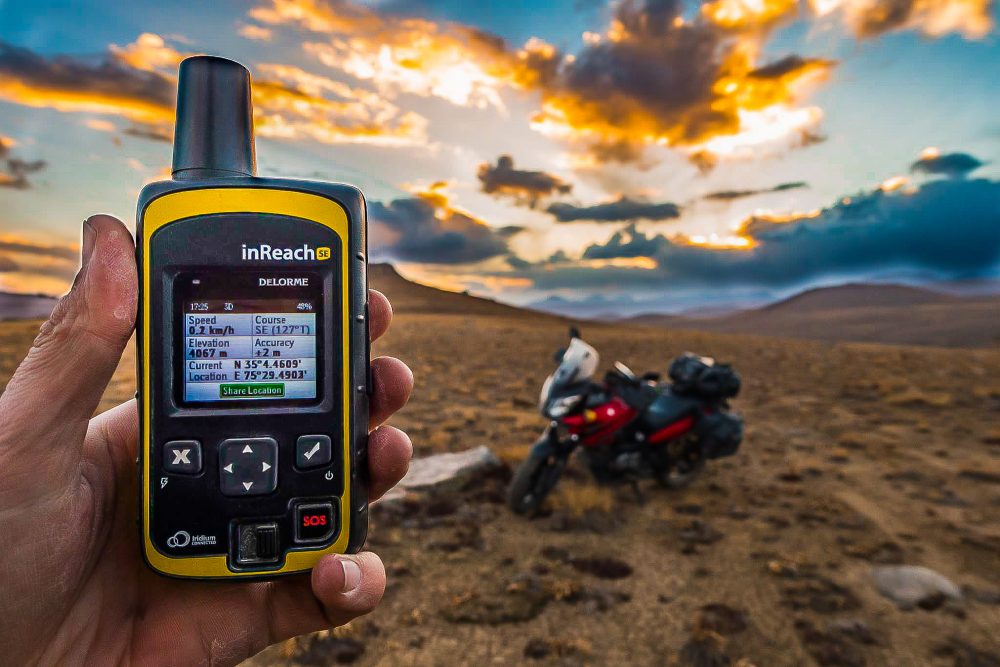 Women’s issues were not the only downside of traveling Iran: Nora had a bad crash while riding in the mountains, and she says it tainted the whole experience. “I was riding along at about 40 miles per hour when a car driver who was trying to overtake me hit me from behind, and I flew off into the bushes by the side of the road. The driver didn’t even stop! I was okay except for some bruises, whereas Zuki was badly injured – the fairings were destroyed, the handlebars bent, the crash bars and rear brake pedal got twisted. I was in shock. A lot of people stopped to help, and eventually, I rode into a little village where the locals patched Zuki up as best as they could…But, as they were working on the bike and I was sitting down recovering from the initial shock and drinking tea, somebody stole a knife from my tank bag, and that was just the final straw. Yes, the Iranians are incredibly hospitable, yes, it’s definitely worth visiting the country, but because of the crash and some other unpleasant experiences while camping, I think I’d prefer to either travel Iran by a different means of transport or to have company. It would just be a lot easier.”

No Plan Is A Good Plan

The Dutch adventurer claims that while the bike is just another means of transport for her, she loved traveling Asia on two wheels; the freedom to explore was exhilarating.

“The best part? The Pamir Highway was definitely one of the highlights. I loved Pakistan – the nature is just absolutely stunning. Kyrgyzstan and Tajikistan were incredible, too – the mountain views were breath-taking. I love riding in the mountains, especially if I have company and can go off the beaten path to explore the little back roads more and camp in the bush – it’s so much fun!” 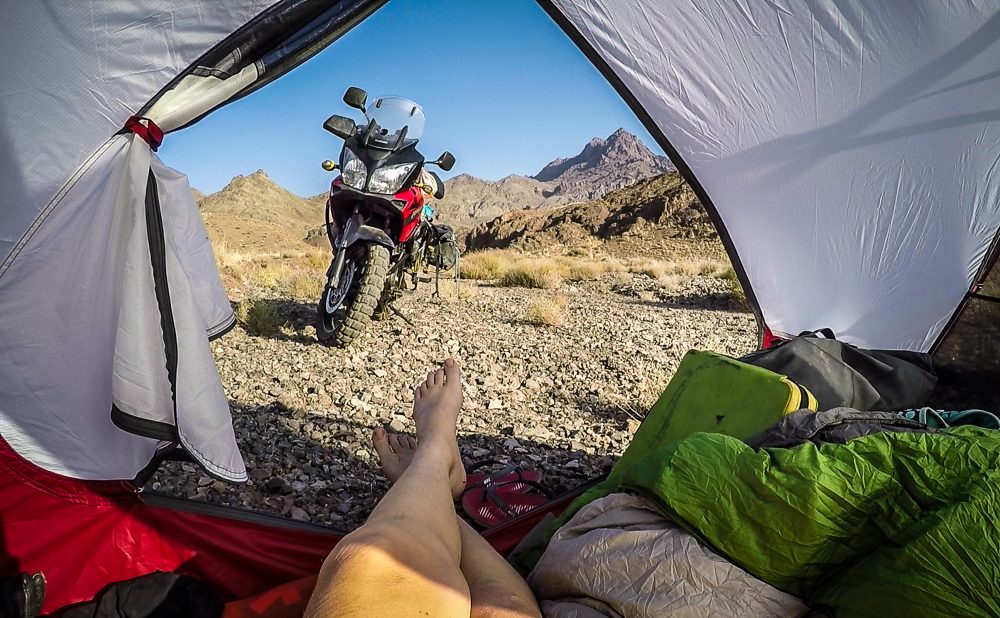 She confesses she did miss meeting other female riders on the road. While she did see a lot of guys, couples, and groups of friends riding, she hasn’t met a single female rider traveling solo. “It would be so awesome and so empowering to see more women riding on their own. I follow a few female riders on Instagram, but haven’t met anyone of them in person, unfortunately. Then again, I think maybe guys are a little louder when it comes to blogging, vlogging, and other ways and channels to tell the world about your adventures. Men usually have no trouble at all to show off how cool and adventurous they are, whereas a lot of women go on these epic adventures and never tell anybody about them. Women also tend to downplay their achievements a lot, like, oh, I didn’t do anything special, I just rode places…Damn girl, of course, you did something special! I’d love to see more solo female riders out there. And it’s true, women are often more cautious. They want to know exactly what to expect – I coach snowboarders and kite surfers, and with guys, it’s usually the case of ‘just let me do it, I don’t need any instructions’ – they simply go for it. Whereas with women, I usually have to explain all the steps we’re going to take, break everything down into more detail. I think the key really is to balance being cautious and being afraid: there’s nothing wrong with not wanting to take unnecessary risks, but don’t let fear stop you, either!”, – encourages Nora.

In a couple of weeks, Nora will be flying back to Nepal, firing Zuki up and riding to Thailand, Myanmar and finally, Bali.