Before 2013, Christina Pefani had never ridden a motorcycle. According to her, even her bicycle skills were a little rusty. But that didn’t stop her from buying a Honda XR250, hopping on a ferry from Italy to Morocco, and setting out on an epic 35,000-mile journey across Africa with riding partner and friend, Elias Vrohidis.

Is it possible to squeeze such an incredible experience and such a vast continent into one interview? We’re not sure – but we’ll give it a go!

– Christina, as a newly minted motorcyclist, how come you had the cojones to go to Africa as your first overland destination?

– The guy I made the trip with, Elias, had already done a similar one from Greece to India on his XR 250. When I met him, he was already preparing for a journey to Africa. So, I thought, why not? There was this small setback of me not knowing how to ride, but what the hell! Here was a perfect chance for me to learn how to ride (and fall) on literally every sort of terrain.

– What were your impressions of Morocco, Western Sahara, and Mauritania?

– We never encountered any problems regarding safety in any of those countries. Everybody was friendly and helpful, if not a little bit astonished to see a woman riding a motorcycle.
Even though they are Muslim countries and part of the Arab world, Morocco and Mauritania are so different from one another. Morocco is very touristy, and the locals are very much accustomed to foreigners, ready to exploit them and to sell out their own culture. Mauritania, on the other hand, is fairly untraveled and unspoiled, with the locals being loyal to their origin and traditions. Morocco was mesmerizing, whereas Mauritania gave me a hard time, but I feel like I should acknowledge the magnificence of this country. Wild camping in the vast emptiness of the desert under the starry skies, where the only sound is that of the Iron Ore Train breaking the silence… Priceless! 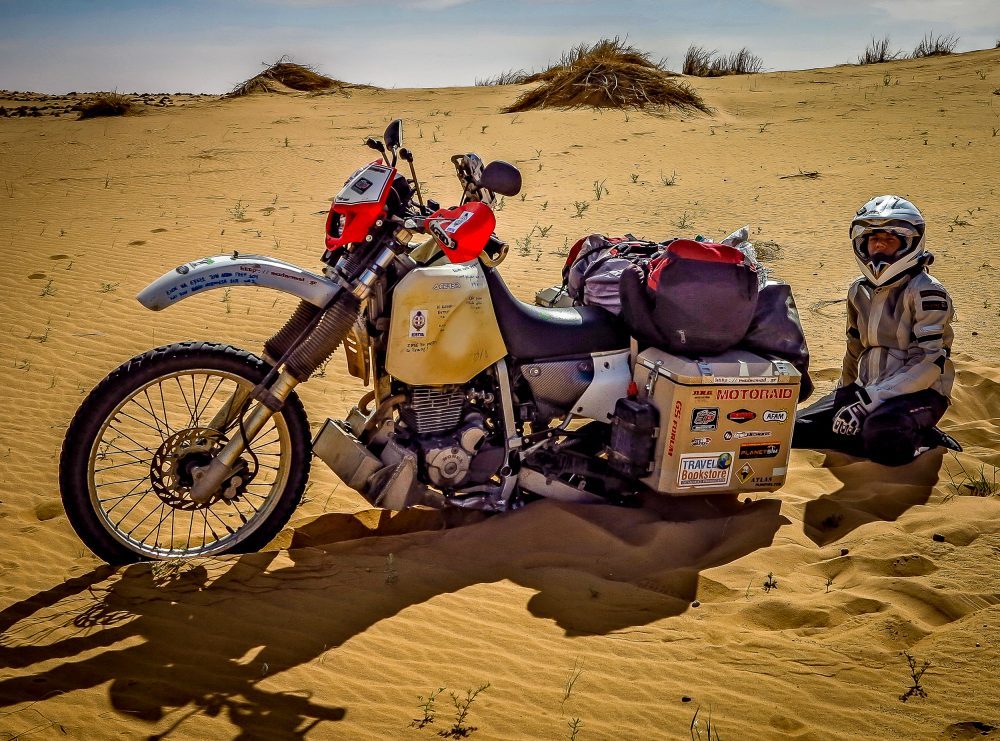 – A lot of people say you only really feel like you’ve left Europe by the time you get into Mali. How did you find Western Africa?

– We found it using the GPS! On a serious note, though, I wouldn’t say I felt Morocco or Mauritania was much like Europe at all. But enter Sub-Saharan Africa and you cross into another world, with all the colors, the smiles, the dances – even the nature around us was blooming, compared to the arid landscapes of the desert. Crossing the border into Senegal made me feel right at home. The countries of Western Africa show many similarities, but they are also very distinct from one another, depending on whether they are former French or British colonies. Western Africa, regarding infrastructure and services, is not tourist-oriented or travel friendly. Major cities lack the amenities that we take for granted such as electricity and running water or paved streets. People are not used to travelers, and you will likely be the reason for village gatherings around your campsite. You will not find much wildlife either; there are very few national parks. What you will find, though, is culturally rich communities, authentic and friendly people, and variety in the scenery- all of which is accompanied by reggae music and local beer. It’s a part of the world that you either love or hate – for me, it was love all the way.

– What were the biggest challenges on your journey?

– The biggest challenge for me was my lack of riding experience, especially when it came to off-road riding, as was the case most of the time. But, as the saying goes, ‘when there is a will (and a Christina), there is a way’!
Another thing that tested our patience on many occasions was the shameless attitude of corrupt officers. We partly expected it as foreigners, but we were very surprised to experience the locals were treated just as badly.
The language barrier was challenging enough, as the Western part of Africa is mostly French-speaking and we could only say ‘bonjour’ and ‘bonsoir’. At first, we used body language as best as we could, which in many cases led to lots of hearty laughter! After a while, we picked up a few of words and phrases and by the time we arrived in the Democratic Republic of Congo, we were able to make some conversation. On the other hand, playing stupid or not understanding what was being said came in handy when dealing with the police and border officials, who would eventually get fed up and send us away. 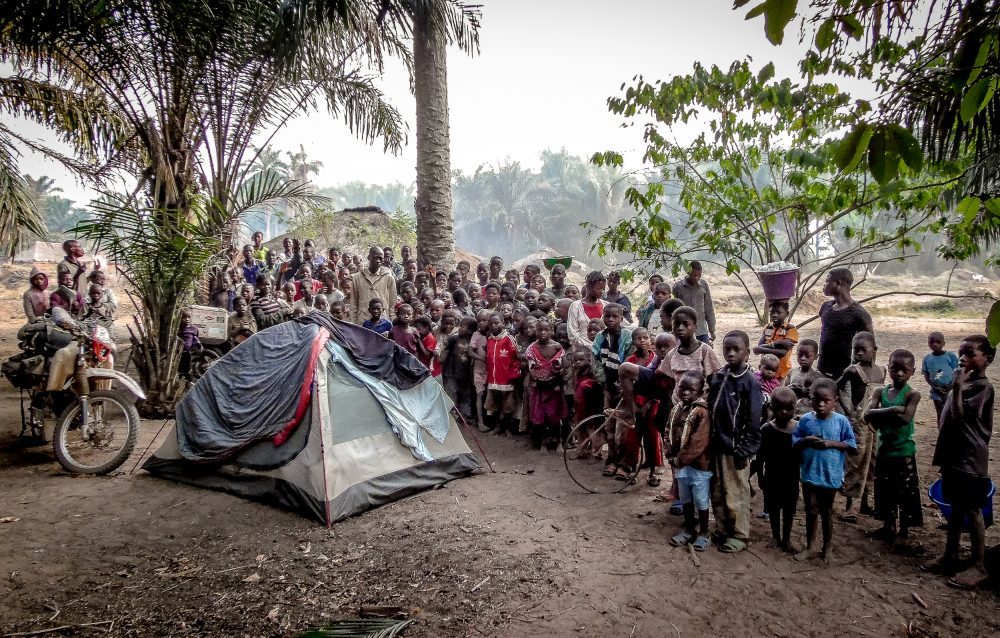 – How come you decided to cross the Democratic Republic of Congo?

– Before crossing into the DRC, we studied every possible route out there. The stories we read about the Kinshasa to Lubumbashi route sounded straight out of a story, but were very true. We heard of vehicles breaking down in the middle of nowhere, travelers being threatened by machete-wielding bandits, deep sandy ruts for hundreds of miles… not what you would call a success story.

Still, we decided to go for it: we felt that we stood a better chance due to our light, easy-to-handle motorcycles.
After having our DR Congo visas issued, we paid a visit to the Angolan embassy just to get the Angola route idea off of our mind. Once there, we were informed that only business visas were being issued at that time. And that was it. We would ride through the DRC no matter what.

The first couple of days after we left the tarmac were like living hell. The main road had disappeared: all you could see was a sandy corrugated river of ruts made by the enormous trucks that go up and down this route. As if that was not enough, the hassle of roadblocks and military checkpoints was constant. Riding was getting very slow, we were frustrated and started to wonder how long it would take before we would arrive in Lubumbashi.

And then, right at the end of the tunnel, there was light! We bumped into some local motorcyclists who advised us to ride the small bicycle trails that crisscrossed the villages instead of moving on the main road. Not only did they guide us through until we reached Tshikapa, but they also took us to their home to spend the night. The next day, they saved our lives once more (thank you, Davide and Patrique!). Instead of heading to Mbuji-Mayi, which was the common route for all travelers, we were shown a different, less traveled route: it lead through Luiza and Sandoa. The road conditions were more manageable, and the various military and other officials were less corrupt and persistent. There was still a lot of sand in every possible color, though – even pink, for God’s sake!

We finally arrived in Lubumbashi after thirteen unforgettable days of riding the 1,500 miles from Kinshasa.
To ride this route, you need a light off-road motorbike, reliable information about the situation in the region, lots of patience with the officers, and a big smile for the locals. And that’s all it takes. 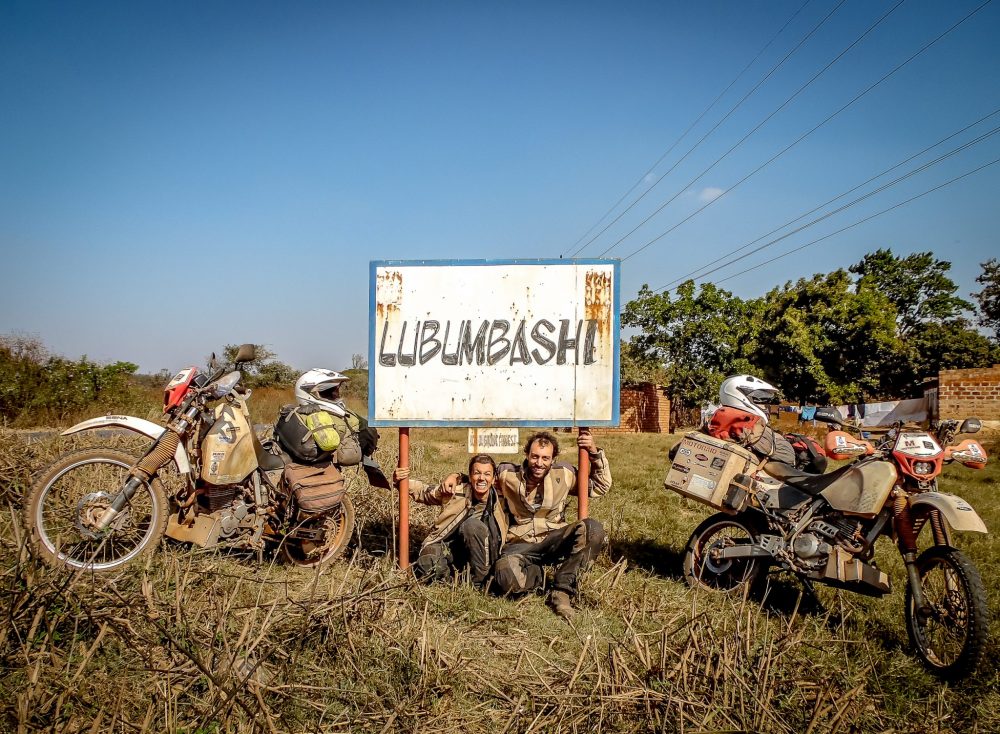 – Where was your most memorable ride?

– There is no way am I choosing just one! Riding the open horizon in the Sahara Desert… Riding from Guinea – Bissau to Guinea using small jungle trails and numerous river crossings… Exploring the rolling hills of Northern Togo, with the narrow winding roads passing through the lush green of the jungle… Getting lost in some villages in Nigeria and being hunted down by locals – the same ones who helped us out later on… The notorious route from Kinshasa to Lubumbashi in DR Congo, with all its fame and glory… Which one would you pick?

– What was your worst and best day in Africa?

– The worst day was when I lost my personal travel diary. Thinking about it still gives me the blues… It happened in the DR Congo, just one day before arriving in Lubumbashi. A small backpack I was carrying got loose and slipped off the bike without me noticing. When I finally realized it was missing, it was too late to do anything about it. I was riding and crying for hours, and by the end of the day, my face was like a clay mask: the tears mixed with dust from the dirt roads – a truly spooky sight!

One of the most amazing days was celebrating the International Women’s Day with the people of AMPO. AMPO is a non-profit organization in Ouagadougou, Burkina Faso, founded by Katrin Rhode. She is an extraordinary woman who set her life goal to be the support of street kids and women in need. Now, under her wing, there are orphanages and a clinic established and workshops for interns and a place where street kids find guidance and shelter. We participated in the folk dances, tasted local dishes, and enjoyed every minute of it. 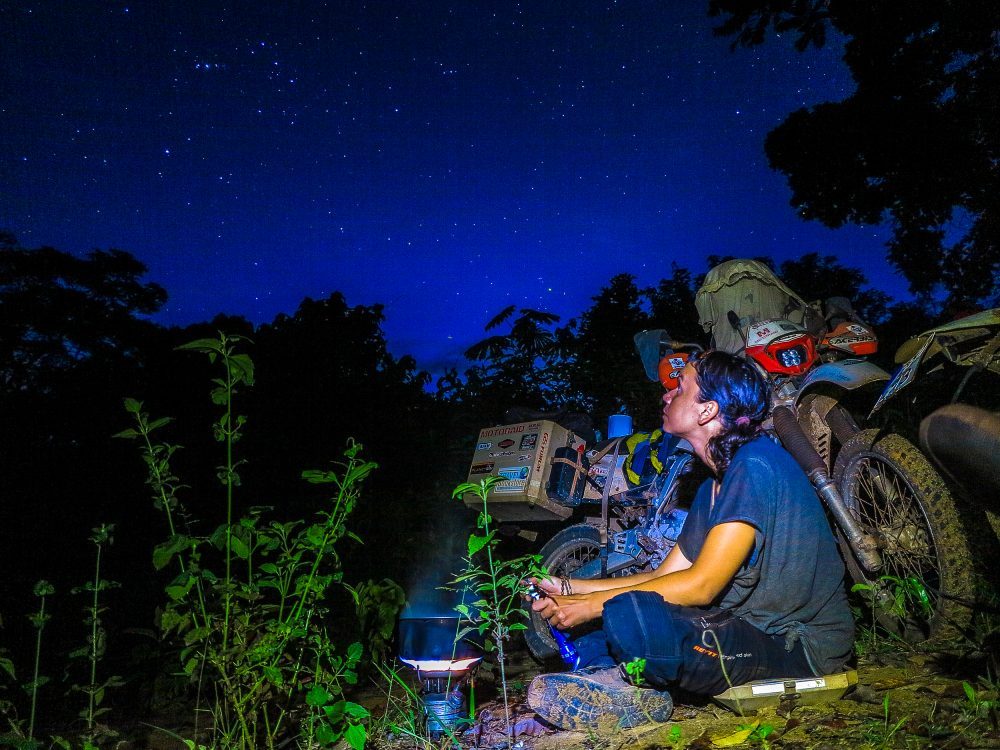 – Which countries impressed you the most, and why?

– Morocco impressed me for many reasons. First of all, it was the first country we visited. As a newbie rider, I was jumping up and down with excitement. Then, it was the diverse scenery that we rode through: from the vast Sahara Desert to the snow-capped Atlas Mountains and the mystical medinas. But what enchanted me the most were the smells and colors of spices in the markets, and every single dish that I simply couldn’t resist trying.

Guinea was a magical place to me. Its mountainous landscapes, numerous waterfalls, and the warm people with a great sense of humor undoubtedly stole my heart. Another thing that impressed me was the crater – like potholes on every single road – a true piece of art! Burkina Faso was another revelation. It was a country I knew almost nothing about. But with its weird rock formations, amazingly painted mud huts and the open-hearted people we met, it wasn’t long before it became one of my favorites. It was also the story of Burkina Faso’s famous leader Thomas Sankara, the so-called ‘Africa’s Che Guevara,’ that impressed me deeply.

And, of course, the DR Congo wins in this category as well. Congo is true Africa, every step of the way: roads consisting of deep sandy ruts, pristine jungle, corrupt officers and people walking for miles and miles to fetch water, yet still laughing and dancing every night. This country is worth every single minute you spend there.

– What’s your advice to women who want to ride Africa?

– The same principles as for any other continent apply to Africa: smile and they will smile back (a lot!), have a positive attitude, be respectful, and the rest will follow. Before setting off, make sure you know your fair share of mechanics. I didn’t, and it was a big mistake. You get a lot of flat tires out there as the roads are sometimes fixed with whatever is available, leaving nails and bolts sticking out everywhere. You won’t always find a knight in shining armor willing to help.Africa has a lot of bad reputation regarding safety, and not without reason. But there are remarkable things going on there: you’ll encounter remarkable landscapes and remarkable people. I wouldn’t change this trip for the world, and I would have loved it if it had been twice as long or even more!

Christina returned to Greece in August 2014 and is now planning another overland journey to Asia.

PrevPreviousDance of A Big Bike Girl
NextWhat are the best bikes for women?Next