The 3 most asked questions about solo female motorcycle travel, explained

When riding my motorcycle alone in a foreign country, conversations usually begin like this:

“Alone? Why are you travelling alone?”

Me: “Because if I have to wait until my friends make time to come along, my hair will be grey.”

Me: “No, I feel safer riding my bike around the world than walking home after a night out in Amsterdam.”

Local: “Really… I could never do that. And how can you possibly afford this?”

This is the blueprint of the conversation just about anyone will have when they encounter the rare breed named “female solo motorcycle adventurer”. No matter the conversationalists’ nationality, age, social background, profession, travel experience, their number of offspring, preferred mode of transport, hair color, favorite TV series… Should I continue? Well you get the picture. From fully kitted out western backpackers, to penny-earning local farmers, these are the first questions they will ask. It is a conversation I must have had thousands of times on my travels from Australia to the Netherlands. Maybe contrary to other bike travelers, I love having this conversation. Or at least I love having two thirds of this conversation. But let me get back to that later. 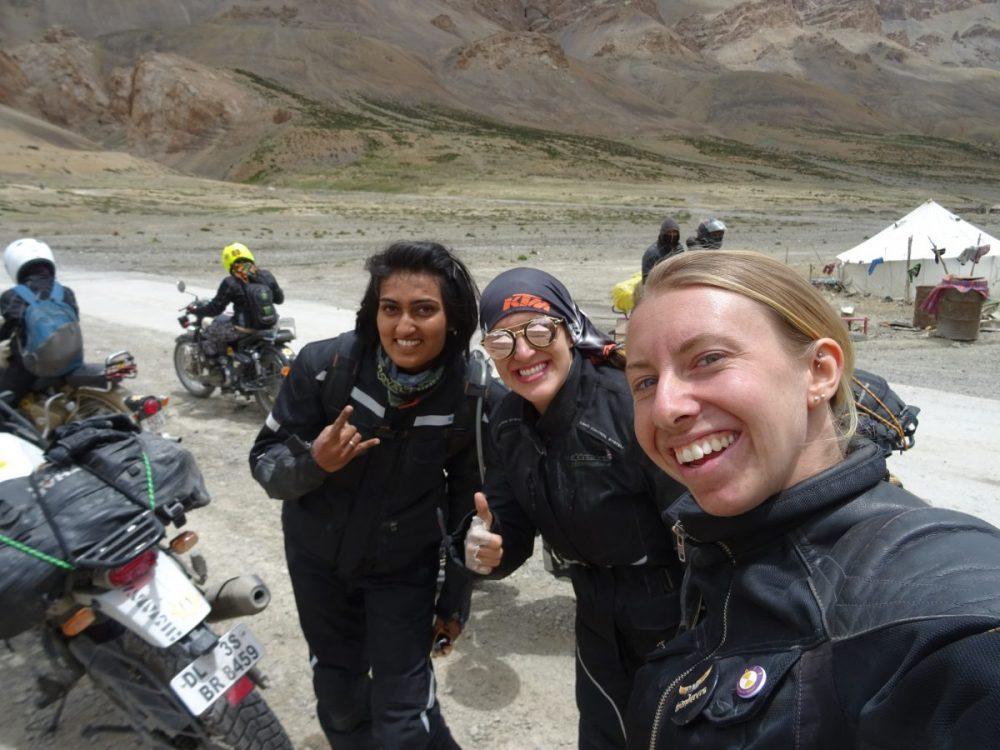 First, we should establish why everyone, regardless of everything, has to ask that same set of questions. It seems that somehow, what we do challenges people’s world views. Let’s start with question 1. “Why are you travelling alone?” This question in itself implies a degree of pity. Was there no one to join you, you poor thing? Why is it that people across the world so strongly believe everything should be a shared venture? Especially a female after the age of … (please insert the average age of marriage in your country) should be accompanied by someone with the capacity to grow facial hair. Or, at the very least, if she is really unfit for marriage, by another deviant female. If you think I’m being a little judgmental here, be really honest with yourself, really, really honest: Wouldn’t you wonder where the husband is? If you really, really didn’t wait for the second half to round the corner, you are probably a solo female traveler yourself. But the social expectation of pair-bonding isn’t the only aspect at play here. It is commonly believed that things can’t be enjoyed unless shared. Most people are secretly afraid to be alone. And, here comes the big one: Few people know the difference between alone and lonely. You can be in the world’s largest shopping mall, surrounded by thousands of people, and feel forlorn, overlooked and utterly lonely. Similarly you can be on a deserted beach, alone, completely filled with contentment and joy. Get where we’re going with this? Once you realize that being alone is in no way related to feeling lonely, you will have crashed through an invisible barrier that could really hold you back in life. 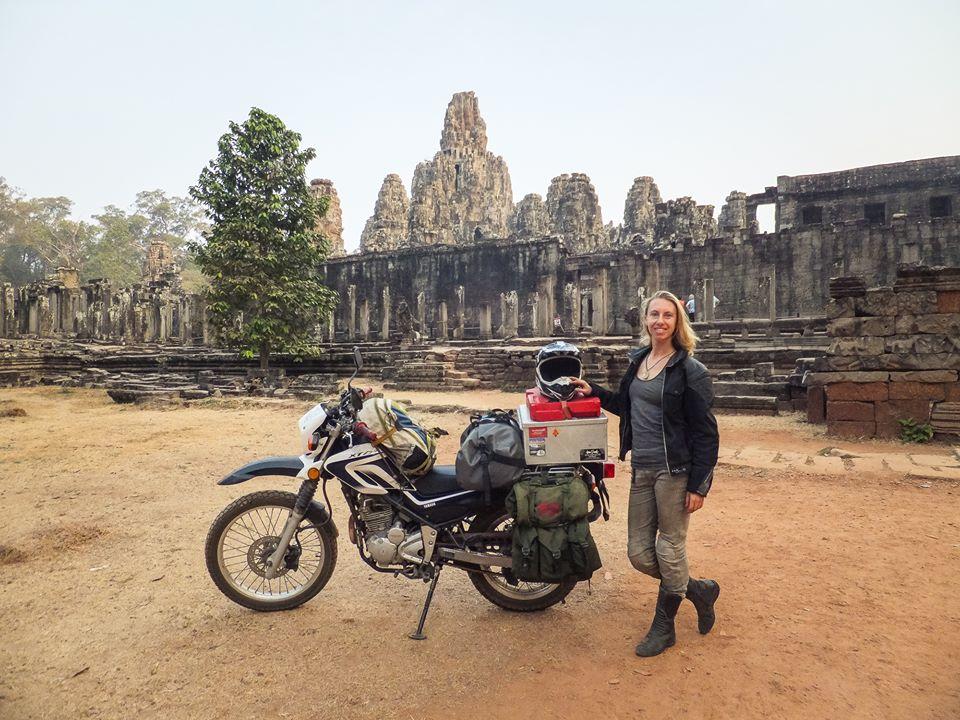 Which brings us to question number 2. “Aren’t you afraid?” Yes, our cave-woman brains are programmed to be scared of everything we don’t know. It is how we survived as a species, how we avoided eating the poisonous berries and tiptoed around that never before seen deadly animal. But in the twenty first century, fear should be out of fashion. Whether berries are poisonous can be googled, and we have been equipped with numerous skills and tools to fight off angry beasts. More than ever in the era of human life on this planet do we have access to information that will get us out of any treacherous situation. We have the answer to most of our questions literally at our fingertips, on the screens of our smartphones. A GPS can tell us where we are, and direct us to where we want to go. Never in the history of mankind was it easier to explore the planet. Yet, probably equally never before, were we so scared of our own species. When we switch on old trusty to check the status of the world, it seems there is havoc, danger and war everywhere. Yet when we go out of the house, to the neighboring city or country, things don’t look that bad. Moreover, people point you in the right direction when you are lost, or lend you their phone to call a loved one when your phone battery is flat.

The question remains, why do we believe that human beings on the other side of the planet are awfully dangerous, while we are surrounded with nice people all day? Because unfortunately, that is all we hear of them through the news, the TV and the internet. If travelling the world teaches you one thing, it is that there is very little to be afraid of. People are helpful, wherever you go. There will always be a place to sleep, you will always find something to eat. 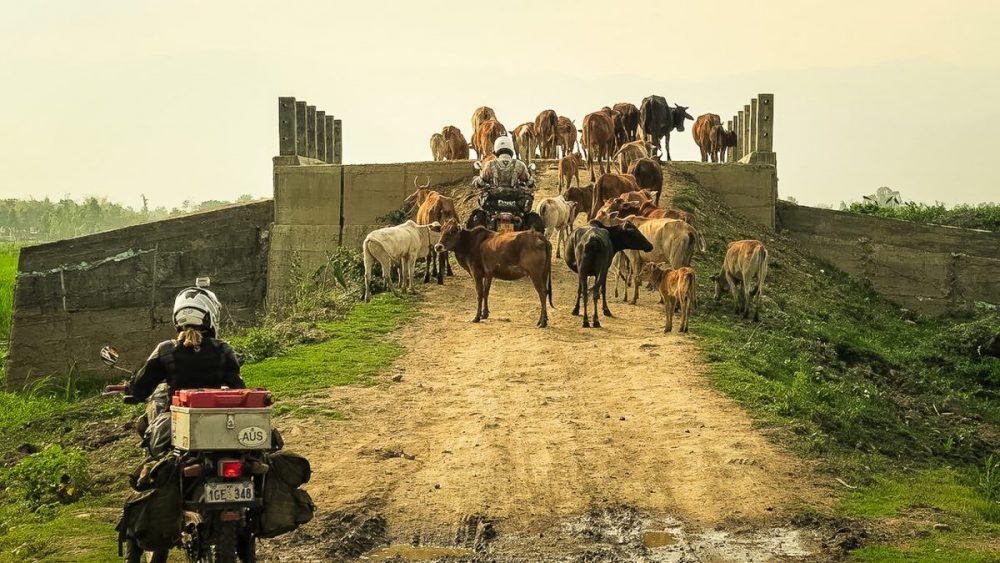 With the fears out of the way, that leaves us with question number three. “How do you afford to travel halfway around the world on a motorbike?” This is the question where it starts to get uncomfortable. Most of us don’t like to talk about money. Let alone talking about money with people who so obviously have a lot less than we do. People who, simply because of where they were born, will make in a lifetime what Westerners will make in a year. But that aside, there is another aspect to gathering the funds to travel the world. I had to make some financial choices that most people don’t understand. “So, how do you afford this?” The answer to that is different for everyone, but one thing is sure. That question gets answered months or likely years before departing on a trip. Your ability to travel is likely tied to your ability not to spend money. Yes that’s right, to do something that costs a lot, you can’t spend a lot. For me it started with the little things. Before even deciding that I wanted to travel, I decided to save. So I would ride my bicycle to work instead of taking public transport, saving over $1,000 per year, while boosting my health. New clothes? How about repairing something you already have, or checking out a second hand store? And while you’re there, they actually have some pretty nice furniture, kitchen appliances, sporting goods and… oh hello, is that a set of panniers? See, that was easy enough, and all the money you don’t spend on shiny new things, you can spend on your trip. However, telling people that all your clothes are second hand will likely be met with some raised eyebrows. So it’s the social expectations of others you’ll have to deal with here. Let’s continue. For the price of one coffee in Australia you can get two full meals in India. A beer in a bar in Oz can feed you for two days in Indonesia. Are you getting the point? 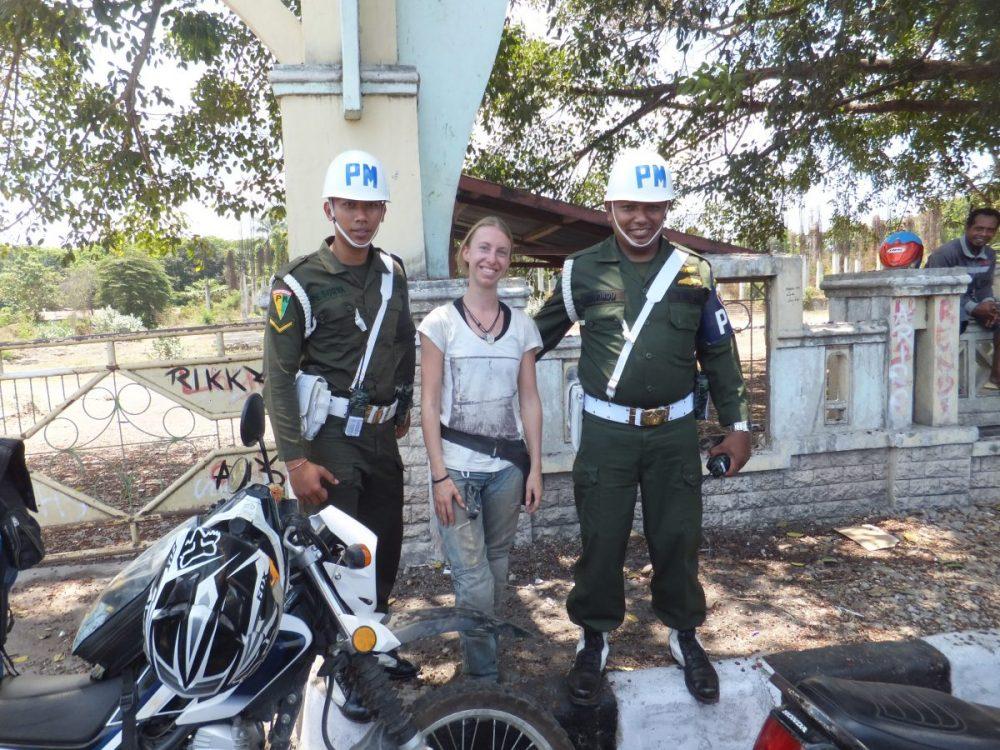 Again, sticking to the water while your friends are lining up the shots might not make you Miss Popular… But in the end, it will take you around the world.

Unless you have a very well paid job and no family or mortgage to spend your earnings on, you better keep track of what leaves your wallet. When telling people I stopped drinking alcohol and seriously cut down my meat consumption to afford to put fuel in my bike, they looked at me like I was crazy. While on the trip I always found the cheapest places to stay, which sometimes left me with mosquitoes breeding in the bathroom and cockroaches running around my thinly mattressed bed. At one point hot showers and toilet paper became a luxury, partly because of where I was travelling, partly because I refused to pay double the price for accommodation. How do you deal with it? You just do, because putting fuel in the tank means there will be another adventure tomorrow. When people learn that my panniers cost less than $15 for the set (they are actually old army backpacks with giant ziplock bags inside to make them waterproof) the topbox is a gift from a friend, as is the drybag, no one believes me. Surely you need expensive gear to travel around the world! Well, not really. You need some common sense, a healthy dose of ingenuity and the will to try a setup that might not be perfect. If it fails, you’ll modify it again. Believe me, you will get better and better at all these things the longer you travel. 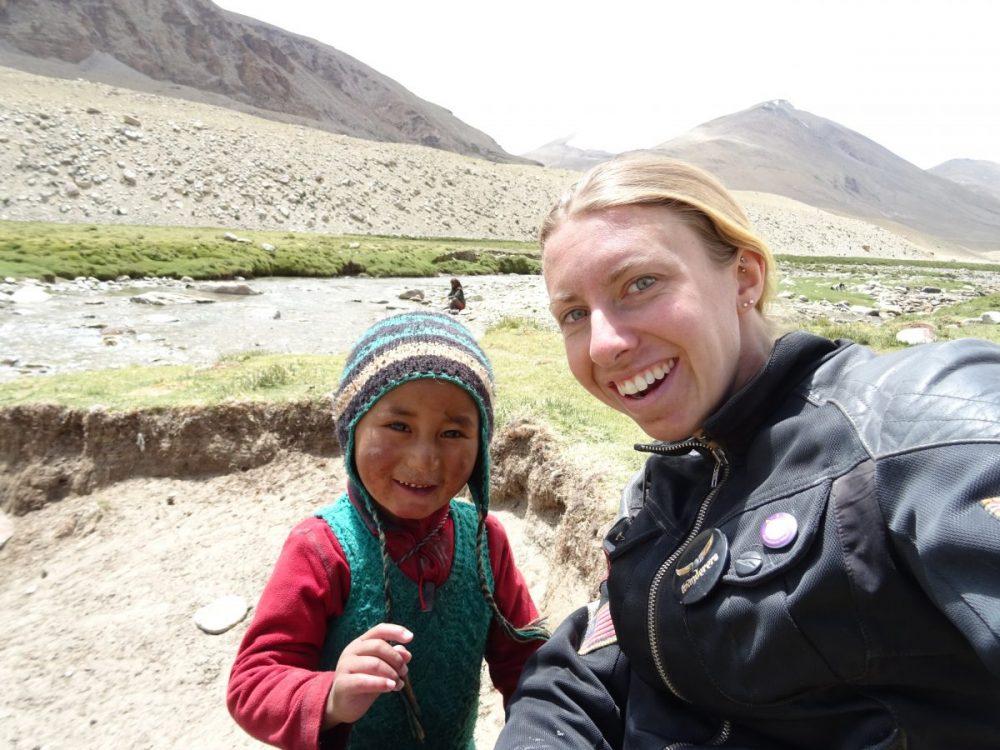 Wherever you go, travelling on a motorbike challenges people’s views. They might not understand that you are there alone, in an unknown land, not afraid to have no clue where you will sleep that night, and not afraid of all the unfamiliar faces in the street. Be fine with them raising a few eyebrows due to your second hand store browsing and alcohol (non) consumption. Everyone will make their own choices of what they are willing to give up to get the funds together to travel. Because yes, travelling can be expensive, but by not going you’re paying the ultimate price. 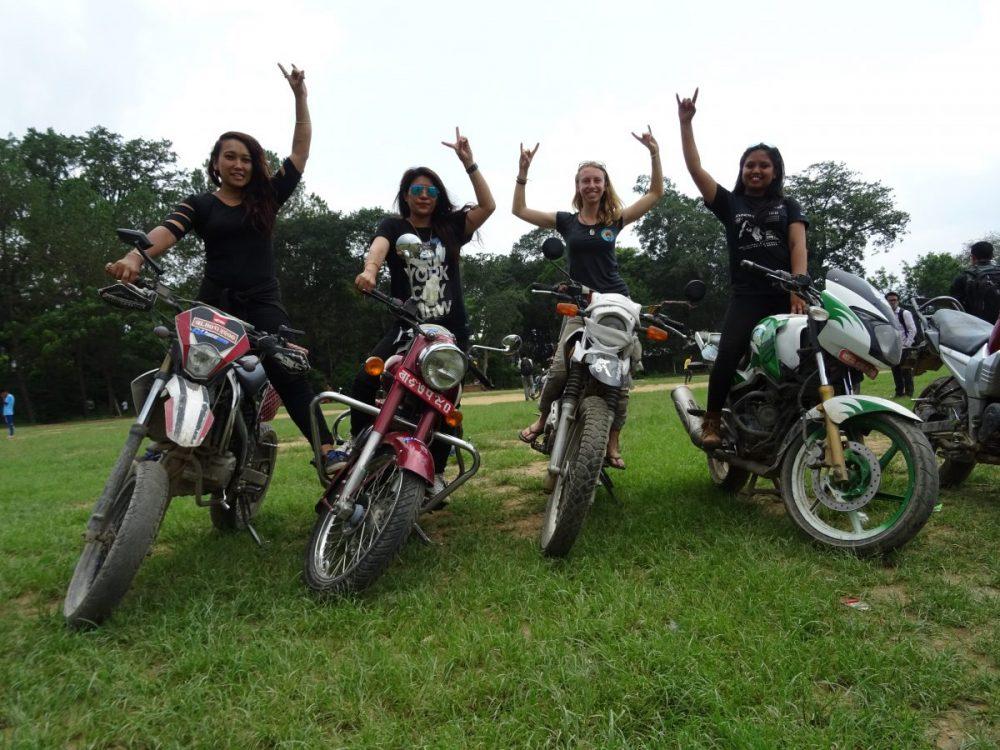 Check her new book out: She’ll be right