Mosko Moto: The Luggage You Don’t Need To Think About

I know people who are rather passionate about bags – but I’m not one of them.

Luggage I something I prefer to never have to talk about: much like great coffee, excellent wi-fi connection and unpretentious but tasty beer, I hope it can just exist, readily available, awesome, and uncomplicated.

But anyone who’s riding round the world (or simply enjoying dirty holidays in Colorado, Romania or the Australian outback) knows that coffee, internet and decent beer can sometimes be too much to ask. And like other things that we hope to easily take for granted, luggage can unexpectedly morph into a constant headache that never goes away.

This is precisely what had happened during my years wandering South America on a tiny Chinese motorbike with my backpack strapped onto the unsuspecting pony’s tail. The backpack kept falling off, getting loose, getting wet, getting dragged on gravel…at the end of my journey, the Backpack vs Me war had escalated to absurd levels of animosity and contempt. This luggage system sort of worked – it did get most of my stuff from Peru to Ushuaia to the Caribbean – but I could never just forget about it and enjoy the ride. 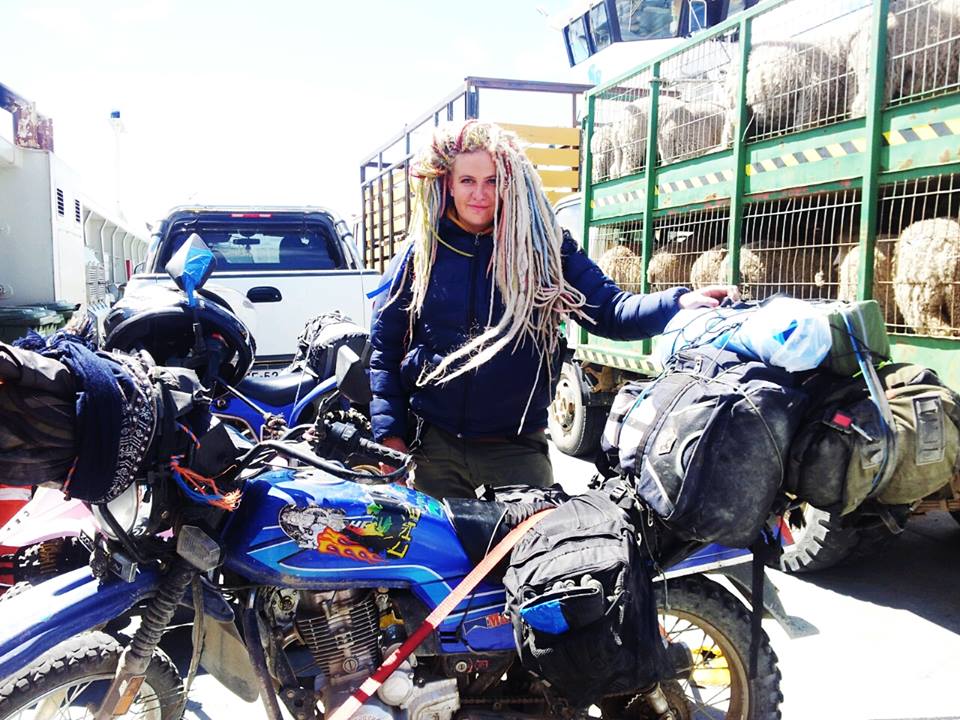 Next came a plastic set of panniers and a plastic top case. Much like the primitive backpack and straps system, the Plastic Power didn’t last – I crushed the panniers within the first two weeks of using them, and the top case gave up after a particularly nasty off-road section. The whole thing just kind of vibrated off the bike.

I was forced to think about bags. Again.

Last year, the luggage situation was remedied significantly by exploring Europe two-up on my partner Paul’s Super Tenere, equipped with a set of aluminum Al Jesse panniers. Those things were wonderful: durable, comfortable and easy to take off, the hard bags served us beautifully. 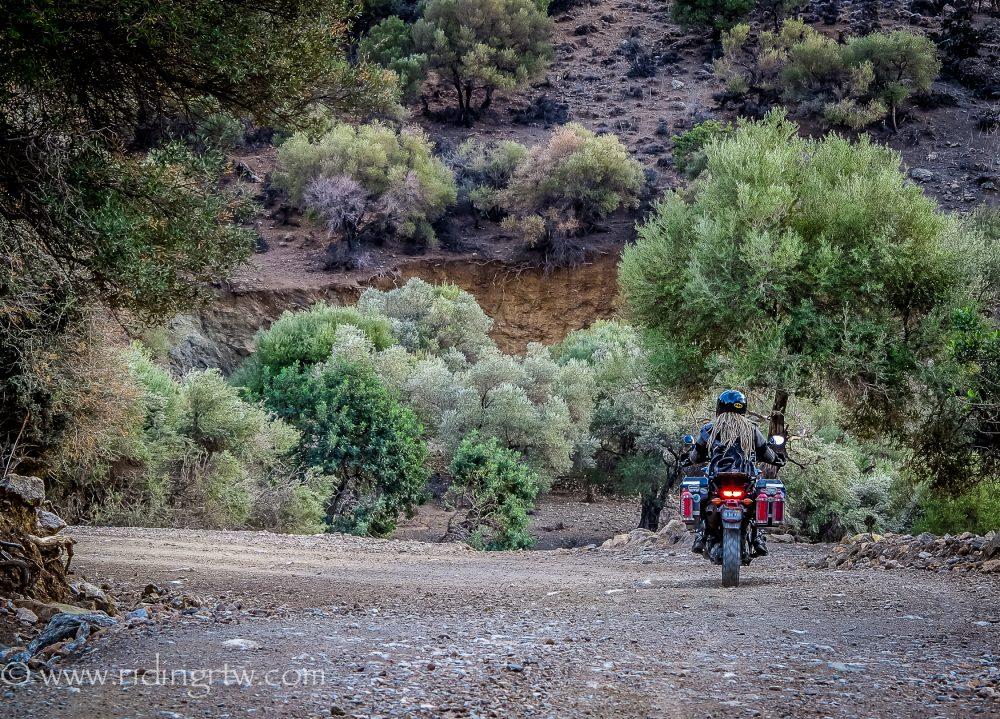 But when we decided to go back to two bikes this spring and ride around the world primarily using dirt roads and minimalist approach to packing, the much-dreaded luggage question presented itself again.

A shopping basket in the front with two small backpacks as panniers (thanks for the inspiration, Ed March)? Hard luggage? No luggage?

Thankfully, Paul had an answer: having already used Mosko Moto soft luggage on the Trans America Trail before, Paul was convinced Mosko was the way to go. Plus, we’d already used a Mosko duffel bag for our European escapades, and it remained unobtrusively awesome: sturdy, reliable, and waterproof. 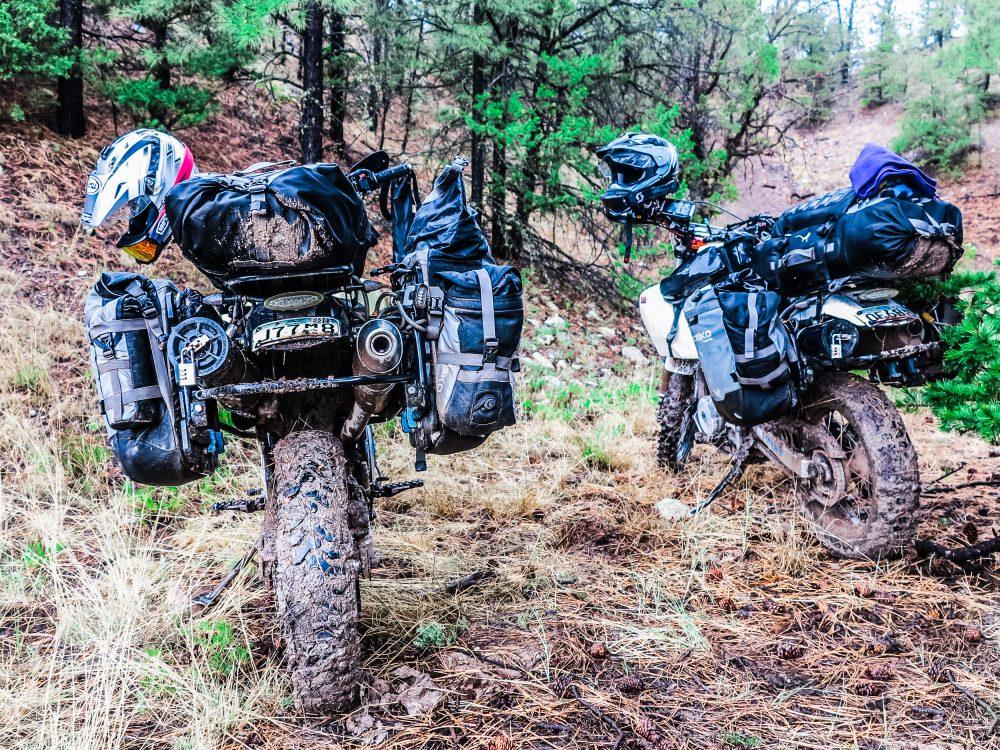 Using a 25-liter Mosko Moto Scout V1 panniers and a Backcountry Duffel 30-liter top bag each, we set out on a 20,000-mile journey across North America. With the TAT, the Trans Canadian Trail, and a few Western Back Country Discovery routes ahead, we were expecting a lot of off-roading, moto camping and all sorts of weather. Personally, I also predicted more than a few offs: having never ridden a big motorcycle off-road before, I knew I was in for an adventure.

And adventure it was. Crossing New Mexico, Arizona and Utah and exploring Colorado to start with, a quick dash across the plains of Kansas and Oklahoma and a streak of rainy days in the East to get us into the rhythm, a cold but magnificent Newfoundland and a hitch-hiking stint on the Trans Labdaror Highway for a grand finale, our summer was definitely an eventful ride.

But the real test was saved for last: a two-day off-road training event in Ouray, Colorado, exploring Rocky Mountain passes and gold mining ghost towns. After surviving dust, sand, rain, crashes, and relentless weather, my Mosko bags had to repel one more attack – this time, by a hungry black bear trying to get at a cucumber I’d forgotten at the bottom of my pannier. Apparently, as the winter is coming, bears try to gorge themselves on whatever they can find – spruce needles, leaves, and, it turns out, cucumbers left out by careless campers. 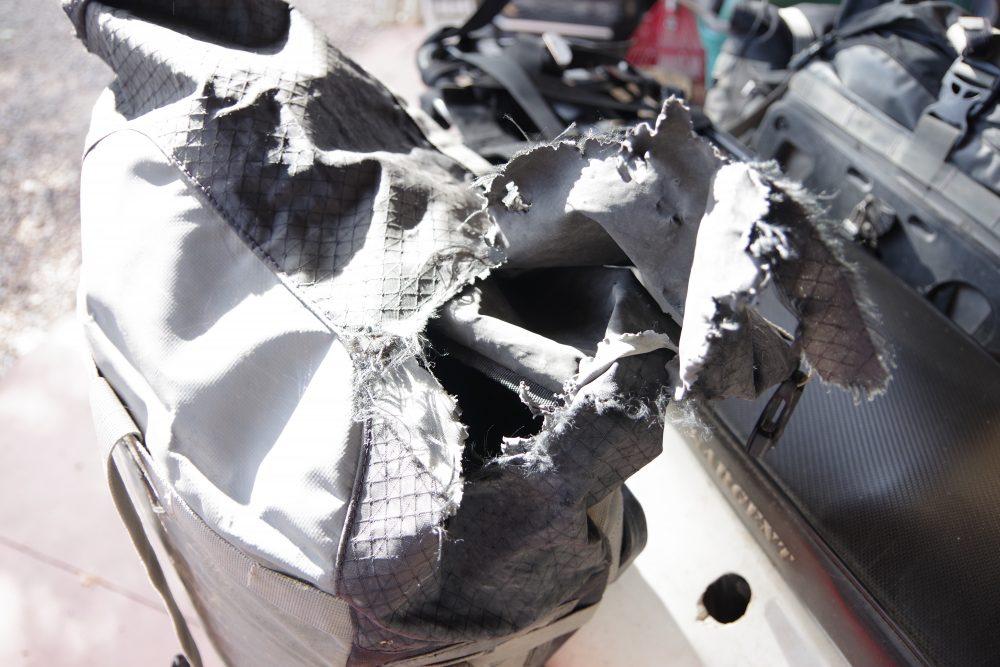 The bear was out of luck, though: despite clawing and gnawing at the bag, the unfortunate Teddy had to depart without a snack – startled by our campsite neighbors and their flashlights, the bear left empty-clawed. The outer layer of the pannier was left in pieces, but the inner, waterproof layer held. Although teeth marks had rendered it somewhat less water resistant, it was still in a good enough shape to use.

And just like that, Mosko Moto had achieved what I once thought was wishful thinking: a luggage system that you don’t need to think about. The panniers and the top bag are there, doing their job: keeping my stuff stable, safe, and dry. On all terrain, in all weather, against any critter. I can forget all about it and just enjoy the ride.

– Easy to use: thanks to the simple but reliable pannier rack mount design, taking the whole pannier off requires less than a minute. Handy when leaving bags on the bike is not safe.

– Durable. Mosko Moto panniers and top bag survived daily abuse for 20,000 miles on all sorts of roads, tracks, and paths, in all weather.

– Waterproof. You know how often labels say things are waterproof, but then those things turn out to be water-resistant at best? Well, Mosko Moto stuff IS waterproof. No tricks.

– Easy to clean. I came off my bike at an odd angle on some babyhead-sized boulders in Arizona; the crash resulted in nothing more than mere annoyance and a bent gear shifter – but little did I know that I had simultaneously crushed a can of chicken soup inside the pannier, and said soup poured out. My stuff spent a whole day marinating in it in a 105 degree heat, and when I opened the pannier in the evening, I was greeted by an extremely aromatic mess. However, simply taking the inner bag out and washing thoroughly in a nearby stream did the job.

– Helps pack light. I used my left pannier for a kitchen and pantry, my right pannier was reserved for bedroom needs (sleeping bag/pad, pillow, and half of our tent), and top bag for clothes, toiletries and laptop. While everybody has a different packing system, Mosko definitely helps to keep things minimal.

– Flexible. The top bag can stretch or shrink according to you needs: when I used all my cold weather layers, I simply rolled the duffel bag down making it smaller, and used all of the space when I needed it again. Same goes for the panniers.

– Amazing customer service! When I had trouble with my tank bag, Mosko Moto responded within 24 hours offering three different ways they could help. Having a company that stands behind their products is absolutely invaluable when you’re on an indefinite RTW trip! 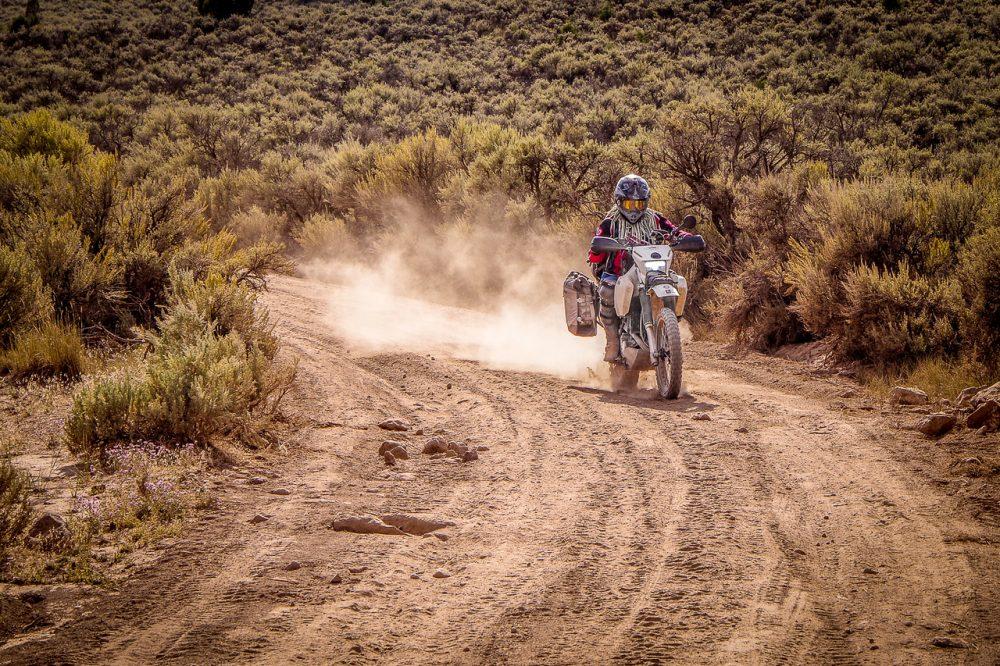 – Soft panniers are easy prey for thieves, and on a RTW trip, safety matters. However, this can easily be solved with PacSafe steel nets, thief-proofing your Mosko and your stuff.

– Grey! I wish Mosko Moto was more whimsical with their designs: the bags are incredibly functional, but I long flimsy and daring when it comes to the outer shell. Then again, strapping a Minion on the duffel bag seemed to have done the job of livening things up.