Rider Down. Spare A Thought For The Witness

ANNE SPEED We are on a road trip from Brisbane to Melbourne and loving the famed, gorgeous Bylong Valley Way with windy roads when a white pick-up looses it on a bend and comes straight for us.

I am leading on a Triumph Thunderbird at the time, and Anthony is following on the Triumph Street Triple.  I instinctively swerve away to avoid the oncoming vehicle, end up off the road, on the road, off the road, then as I tell Anthony through our Sena headsets that I am finally stable again and safely back on the road, I hear his shouts and moans.  I look in my mirror, horror, he is down, bouncing down the road, the bike tumbling.

I slam the brakes on, stop the bike and run back up the road.  I feel sick in the stomach.  Did the vehicle actually hit him?   How injured is he?  By the time I get to him, he is up on his feet and takes his helmet off.  “Sit down” I tell him.  “Why?  What happened?”  “You’ve had an accident.” He gets up.  “Sit down.”  “Why?  What happened?”  I see blood on his sleeve.   “No it’s not blood, it’s the colour of my jacket.”  He has a black jacket, not rust red.  I call an ambulance.  We are in the middle of nowhere, mobile coverage is scratchy.  I have to walk up further up the road. I loose connection with the emergency department several times and it takes me ages to get them to understand where we are.  I ask myself if this is just a nightmare.

Eventually, the ambulance arrives but they immediately call the helicopter.  It will be a 45’ flight to the nearest hospital.  While Anthony appears fine and has not lost his sense of humour, the medics are obviously worried as he shows all the signs of concussion.   Back at the hospital, X-rays show that he is fine, just badly bruised with a few deep gashes on his arm.  Follow up X-rays and brain tests the next day and he is released from hospital.  He has no recollection of the incident or of anything 20 minutes before and 20 minutes after the accident. 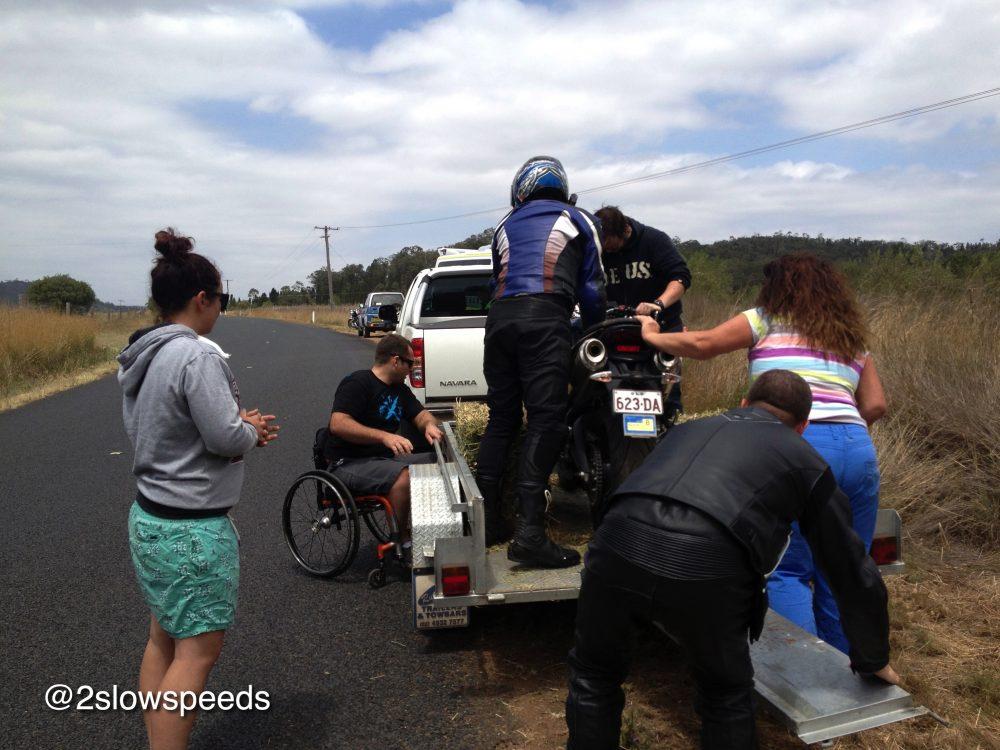 Neither of us was hurt physically really.   We managed to avoid being hit by the vehicle (which didn’t stop by the way),  Anthony soon recovered from his bruises and gashes, never regained any memory of the accident, but I suffered PTSD.

The nightmares, the sudden panic attacks, the flashbacks, the knots in the stomach.  They lasted a long time.  This accident happened December 2012.  The bike he was riding was written off.  We didn’t ride much after that as we only had one bike and we don’t pillion.  Somehow however, we decided to attempt a round the world trip on bikes and set off on 2 identical bikes in June 2014.  This was the first time we rode together again.   The first few months on the road were the hardest for me, not because of the road conditions or the borders, but because I was terrified of seeing Anthony being hit.  I can do this I would remind myself.  I will do this!!  I am not going to give up on this opportunity to travel and allow this PTSD to run my life.  I worked on changing my attitude: if I was going to keep worrying, maybe that meant I didn’t trust him.  I got more comfortable watching him ride again after a couple of months, but the flashbacks continued. 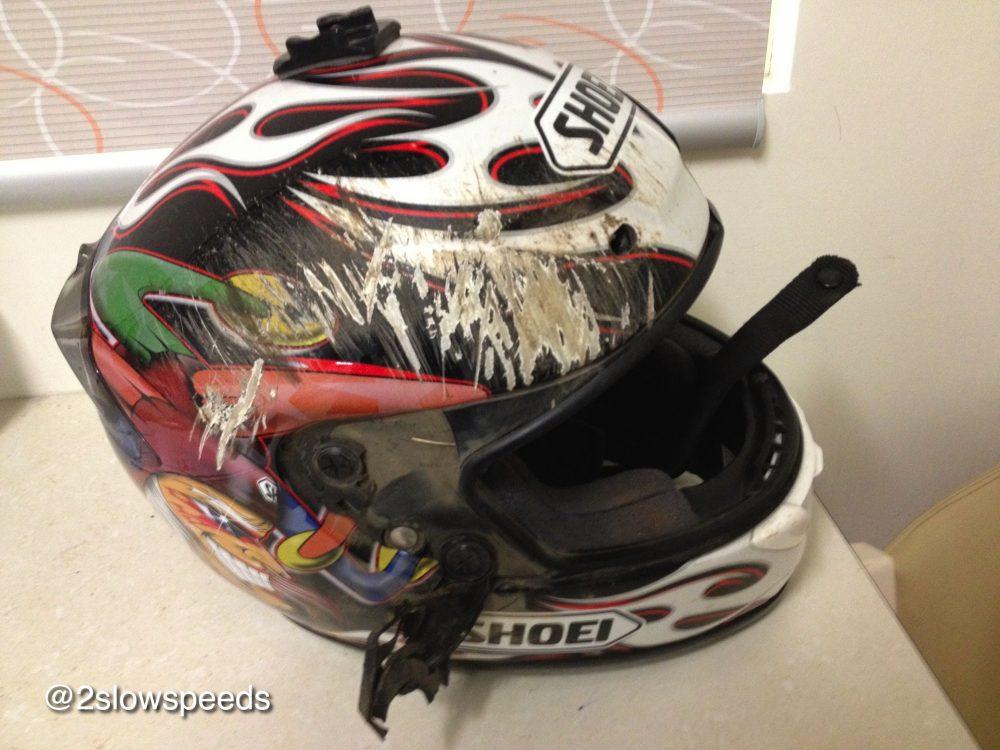 I am usually a very positive person.  And in this case, we are grateful we were riding bikes as we would not have survived the inevitable head-on collision had we been in car.   And I was very grateful for all the strangers who stopped and helped us, especially the farmer who leant me her 4-wheel-drive ‘for as long as  needed” as she said (as I was too shaky to ride my bike the 3 hour drive to the hospital).  But seeing a vehicle coming towards us out of a bend going that little bit too fast will suddenly trigger that sickening anxiety in my stomach.  It comes out of nowhere.  I have learned to acknowledge the feeling and concentrate on something else immediately.

I no longer have the nightmares, just those situational recollections sometimes.  And we have now spent 24 months riding our bikes all over the world.  We are lucky, we are grateful, life is good. 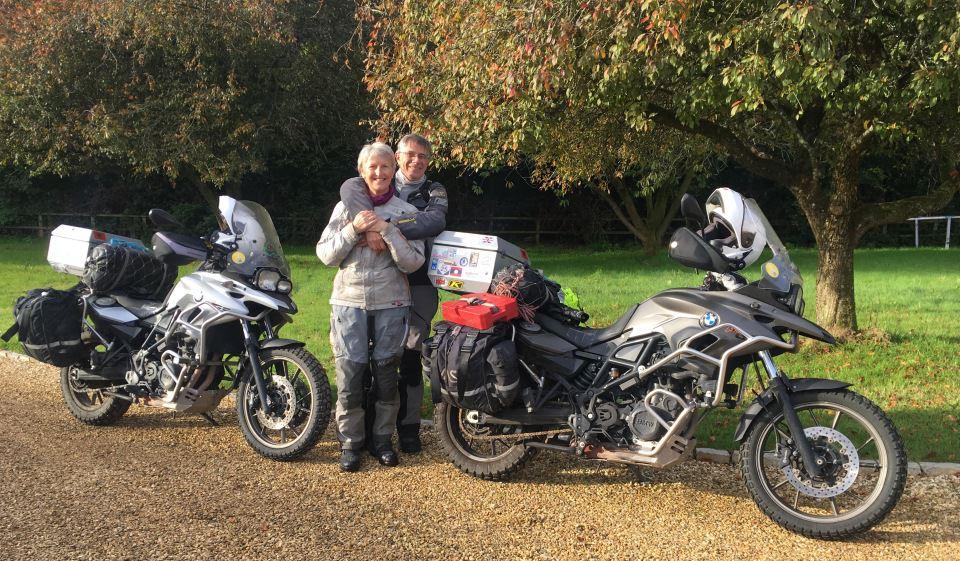 If you are involved in a crash or come upon one, spare a thought for the witness.  They may need as much, if not more, help than the physically injured party.