Aldona Pieva: kind of a „Have courage and be kind“ person.

Aldona Pieva is not somebody you take lightly. She’s different in more ways than one; I met her briefly a year ago – and we’ve been talking ever since.

Aldona, you started riding ten years ago. How have your perceptions about riding changed since? How have you changed yourself, as a rider?

​When I started,  it was just a great wish to ride, I knew nothing about motorcycling at all. I just wanted to do it. Now, a decade in, I know a little more, I have grown up with it, and I found my identity as a motorcyclist. Well, a Lithuanian and a motorcyclist. Naturally at first, it was all about the feeling of riding, getting to know the scene, later – about learning to manage the motorcycle and myself, and now it’s mostly about sharing my passion for motorcycles with others. I guess I’m maturing. 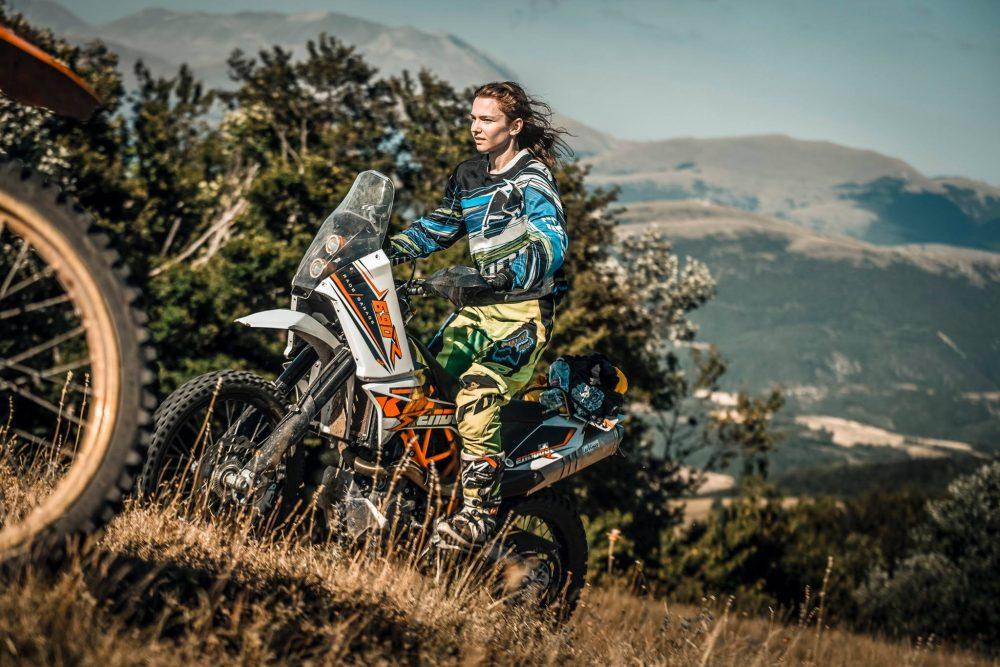 You went from street to hard enduro. Why, how, when?

​I attempted to get my motorcycle endorsement maybe 3 times, and always escaped it. It was overwhelming and really scary to learn handling the roaring beast! When I started to ride on my street bike at last, I had bad crash on some unexpected sand on tarmac, which gave me another huge fear. It kept me thinking a lot for a long. Something was missing; I wanted to improve. So I started from the beginning again… and off the road.​ What an overwhelmingly scary, and breathtakingly beautiful experience it was! And it still is – every time I get out into the woods.

You still have your  old JAWA in your garage. What’s the story behind that little motorcycle?

​Oh, she is a beauty! Her name is Berry and she has a very stubborn, red character. Of course, she is quite old, but a ride on a JAWA is always, always fun, because we break down a lot! My Berry was the first and only motorcycle my brother took me for a short ride. He only did it once and later on, he stopped riding – but I was hooked! Later, she was sleeping for a decade far away from home, but I fired up her engine again. I still think of that motorcycle as my brother’s, because I am very proud, even though he doesn’t like the fact that his little sister is a serious motorcyclist.​

You have participated in a few rallies. What’s it like to race?

It’s the joy which excites me while racing! I cherish the feeling of riding with all those enduristas, I enjoy all the adventures we encounter, ​I love being in nature and I am so happy and alive there! I​t’s an amazing feeling to be pushed on by adrenaline and thrill​ too. I love moments when my stamina is the most important thing, when riding is not enough by itself, when obstacles on an off road track aren’t just a technique you can learn. I love dealing with all of this, and being helpful to others in those moments, too. So endurance rallies are a perfect chance to learn a lot about yourself and people around you, improving as a rider and growing as a better person. I hope I can do more of them!

For women who are just starting out and don’t have access to good off road schools, what would you advise?

When I was just starting out, I couldn’t afford professional training. So to advise to just “go to professionals and learn from them” wouldn’t be exactly helpful, because I know the reality of some circumstances. I think finding a trusted friend who is patient with you is the key. I have struggled too much with people who were too fast, too selfish. So if you’re just beginning to ride off road, find a riding buddy and find your very own way of learning, because learning is a personal thing. “Grip it and rip it” doesn’t always work.

You aren’t just a rider – you’re a moto journalist, rally and event organizer… How did bikes become such a huge passion for you?

The truth is: I don’t know. I was amazed by the feeling when my brother gave me a ride, but it took me years to overcome my fear to ride by myself. Why I was so devoted to it? I had no friends who were riding, and no encouragement from the outside world. Why does it come from within, so strongly that now I call myself  a motorcyclist when introducing myself? The answer is still unfolding, but I am sure it’s in my genes – something I got from my grand (grand-grand) parents. More like grand-mothers, I suppose!

What is RIDE2SHARE​, and how did you come up with the idea?

As a fourth-generation teacher, I love to share my love for motorcycles with others. Teaching, writing, and organizing motorcycle events are my strong suits, and I’m excited to be able to give motorcycling a new meaning. Saying that, RIDE2SHARE was just a natural step forward. I wear glasses so I am very grateful that I can see. I have always had a place for the visually impaired in my heart, but at the same time, I was too intimidated to meet them. In order to overcome my fear and make new friends, I decided to organize an event. 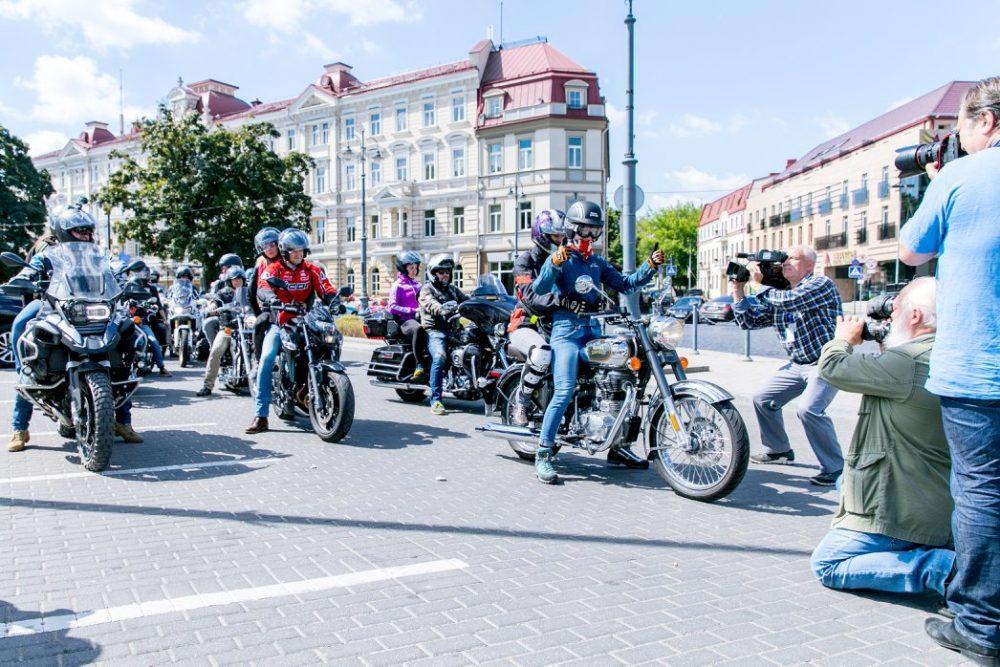 RIDE2SHARE is a project offering free motorcycle rides to the blind and visually impaired. In 2017 and 2018, I organized it in Lithuania, where more than 150 riders took part. Partnering up with the Lithuanian Association of the Blind and Visually Impaired, I had the privilege of organizing multiple ride-outs throughout the country, where riders were coupled with their visually impaired passengers. The result was absolutely amazing! 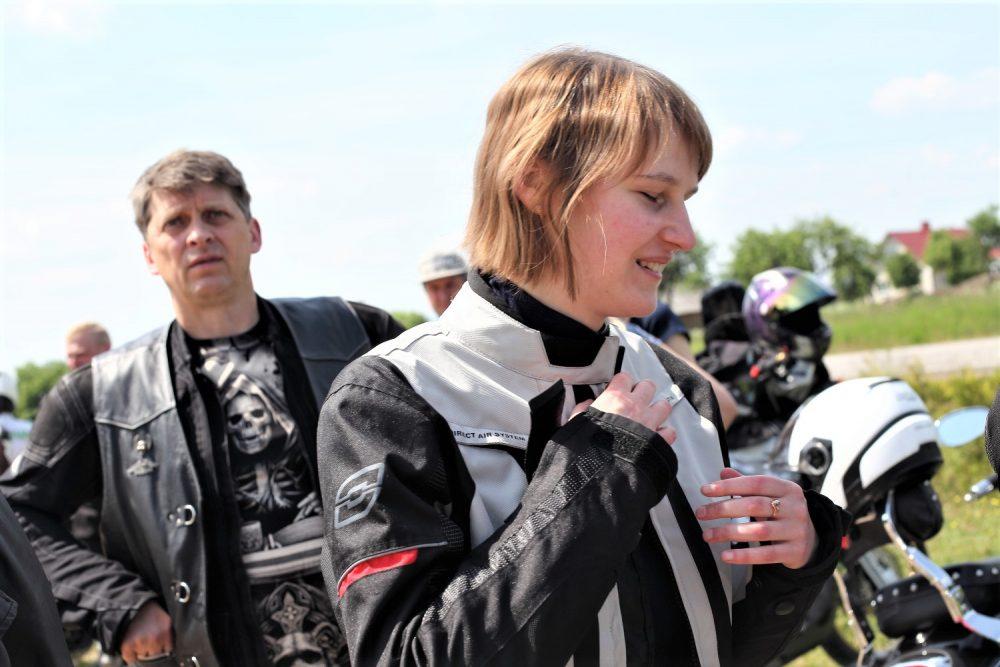 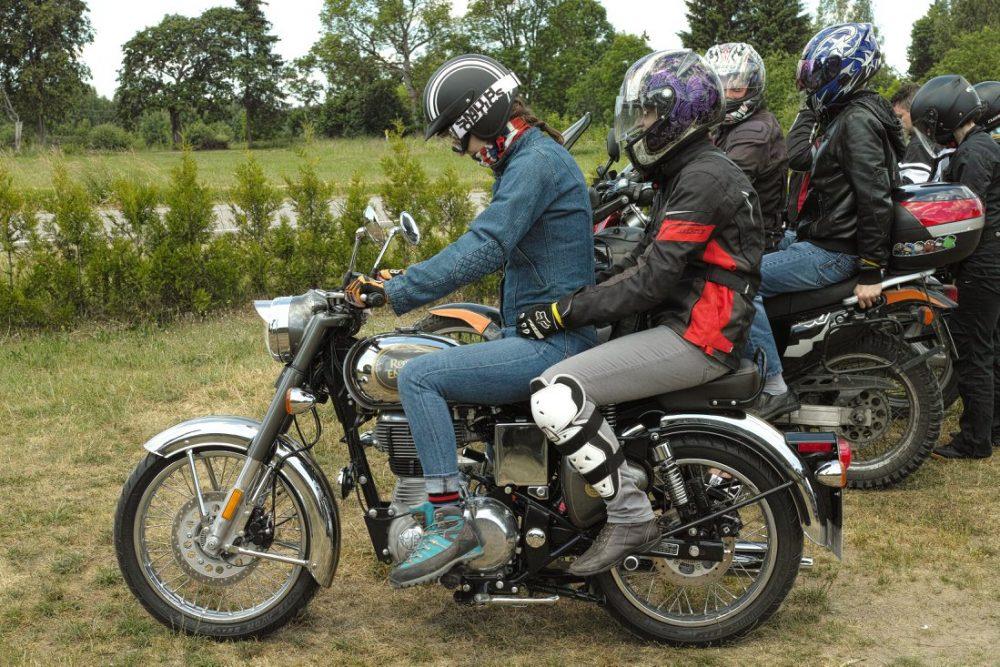 I got fantastic feedback from both the riders and the pillions, and I’m eager to keep the project going.

-What was your biggest reward from that event?

It was the feeling of meaning… that you can do something that others need and appreciate. That you are blessed with an idea, time, energy and friends to make someone happy. That giving is more important than getting. It is also breathtaking to meet so many great and kind people participating in the RIDE2SHARE. 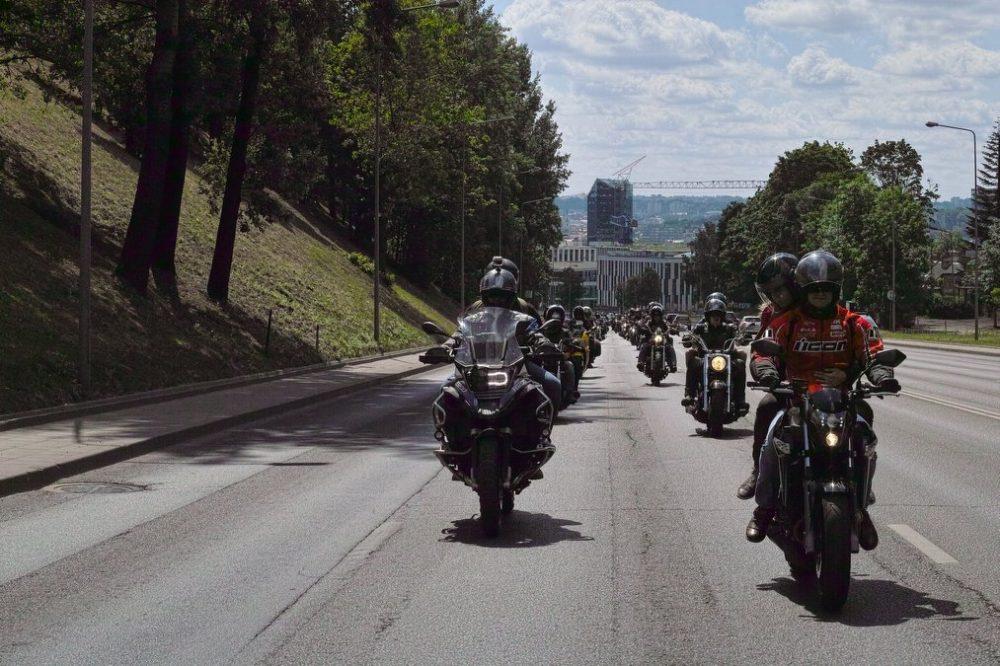 What inspires you to make all those ideas a reality?

My inspiration is injustice – when I see or feel it, I want to rebel, fight against it, do something or at least think about it. Generosity, kindness and courage are my values I hope to share. 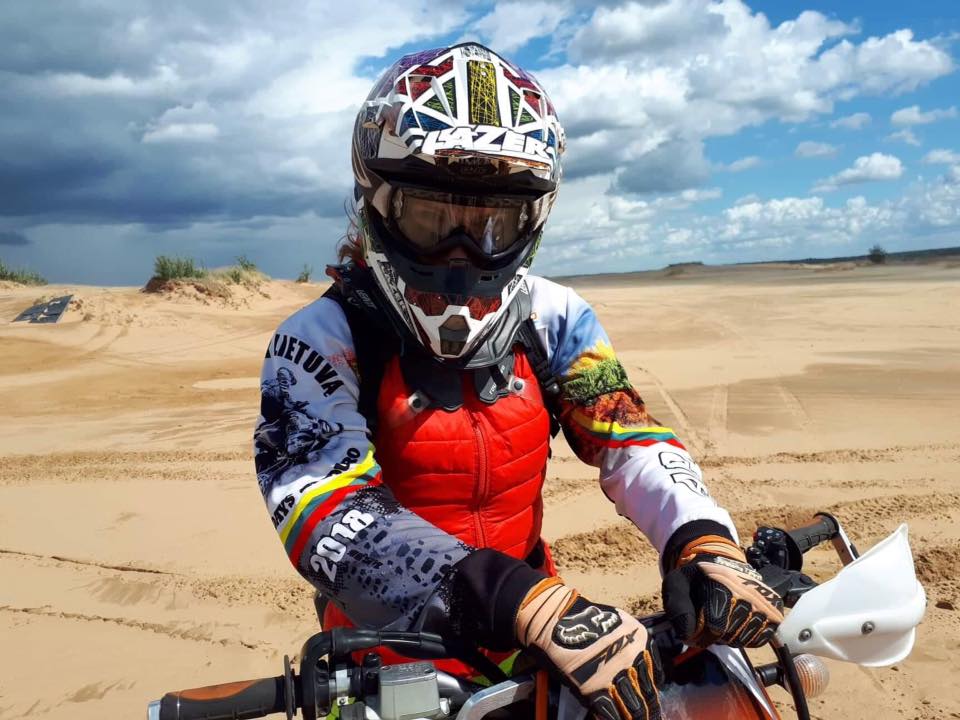 What have you learned from your motorcycling life so far?

Looking back, so much has happened! But I would single out a moment after long years of misunderstandings when at last I realized – I am “just a girl“ in a male-dominated field. I was struggling a lot, couldn’t believe it was true, suffered a lot and was badly disappointed. Now having this realization, it is much easier to breathe. I don’t let myself to be broken by “those rules” anymore – I break them  myself. 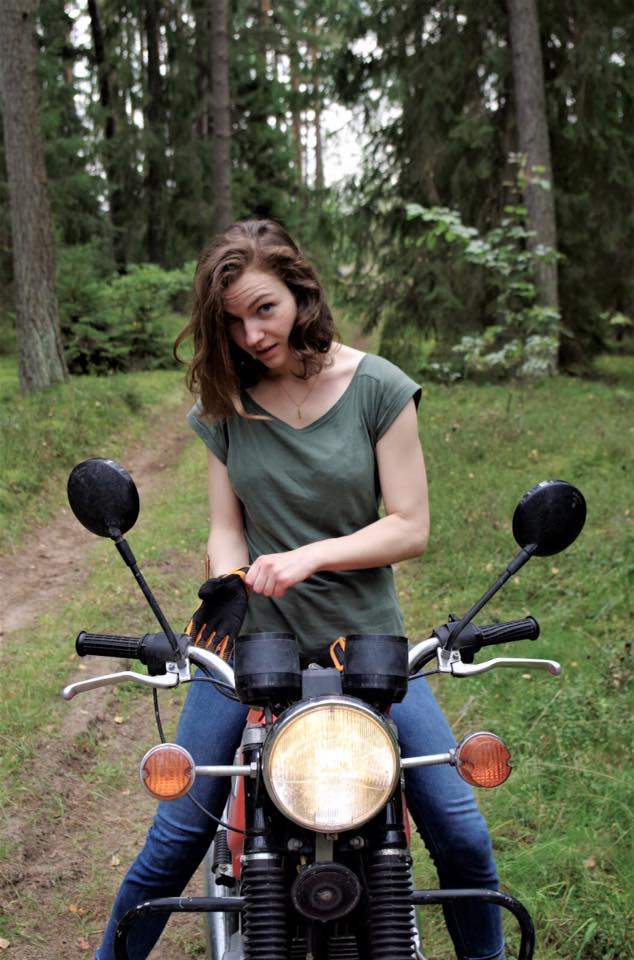 Another really important discovery I found was my love for nature. It is a world of  wonder and beauty out there, so fresh and vivid, so silent and relieving, so part of me. You can even see Andromeda in a deep, shiny night sky, and keep asking questions. And the lake has all the wisdom you need. I try to follow the natural cycle of nature in my life, I seek to escape the noisy city life to a silent, peaceful place to live. 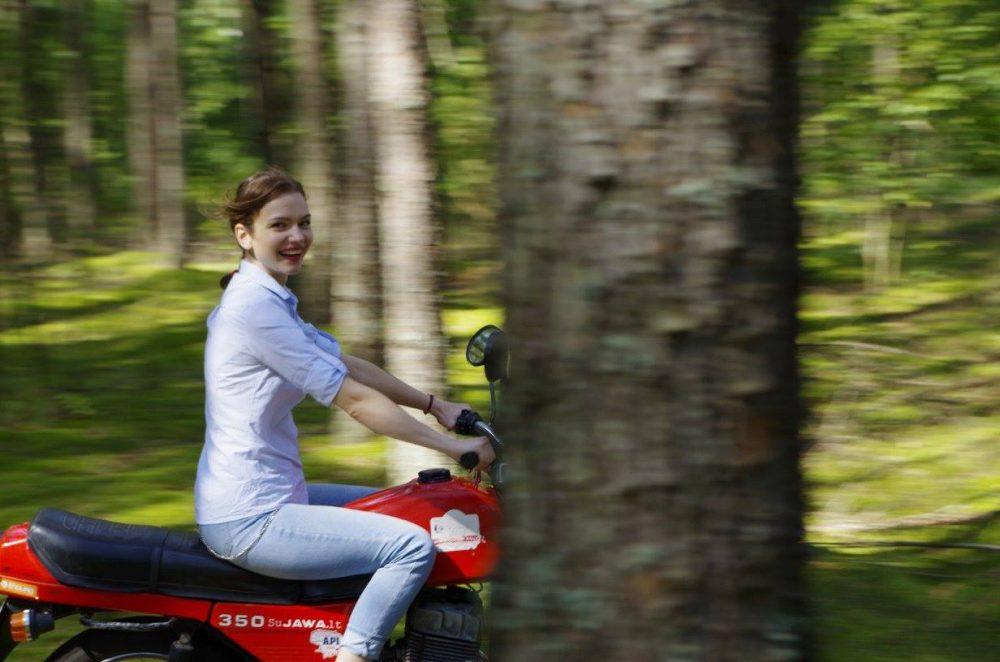 And one more thing that motorcycling gave me, no doubt, is an ability to cherish “the now”. Many extreme situations have taught me to be very grateful that I am healthy and alive and on the road.  Well, mostly off the road:) 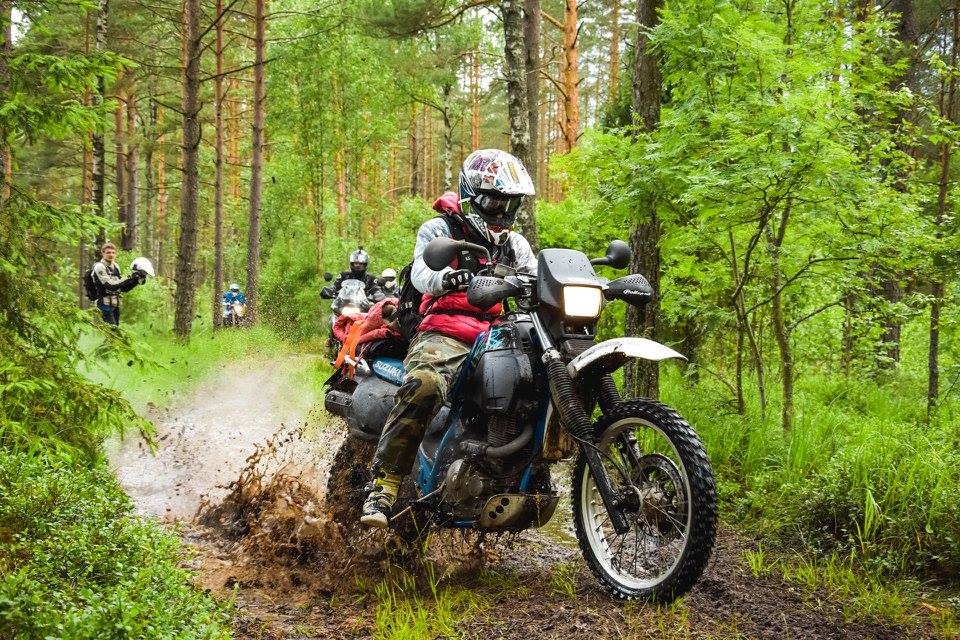 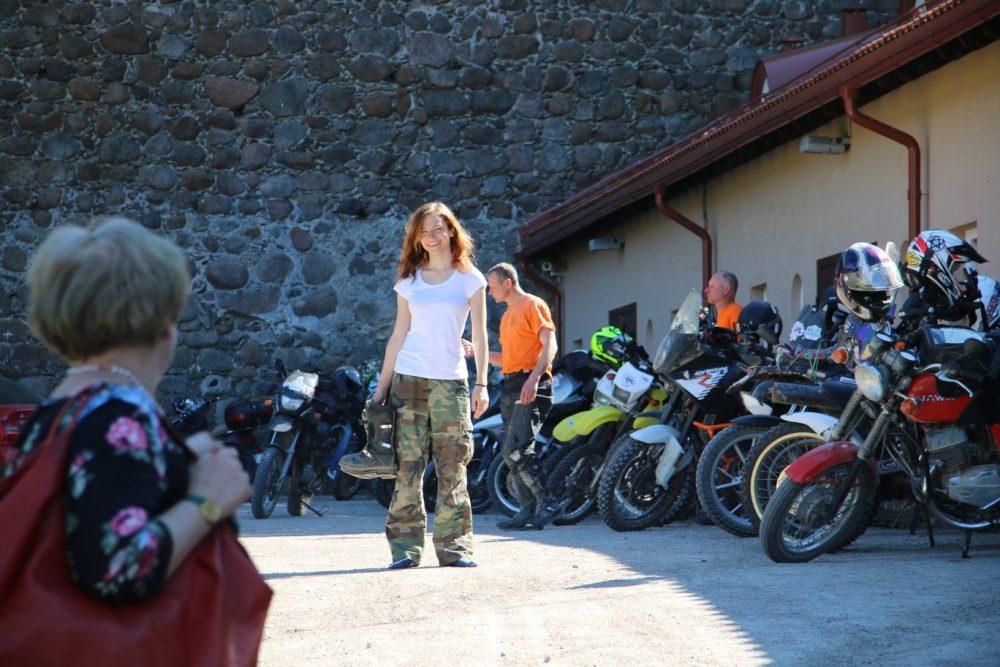