Hard Lessons in Soft Sand: Why My Lack of Knowledge Left Me with No Power

Sitting at a campsite in the wilderness of Australia on New Year’s Eve, I was rescued from the misery of my busted bike with the sentence, “Hello, my name is Ken and I’m here to fix your clutch.”

My partner Malte and I had flown to Australia and bought two Suzuki DR650s three months prior. With a couple of years riding experience and a few trips on the perfectly sealed roads of the Lake District and French Alps, we decided to tackle some off-road riding. We had heard Australia with its vast wilderness, was off road heaven and so it seemed like a good place to start. 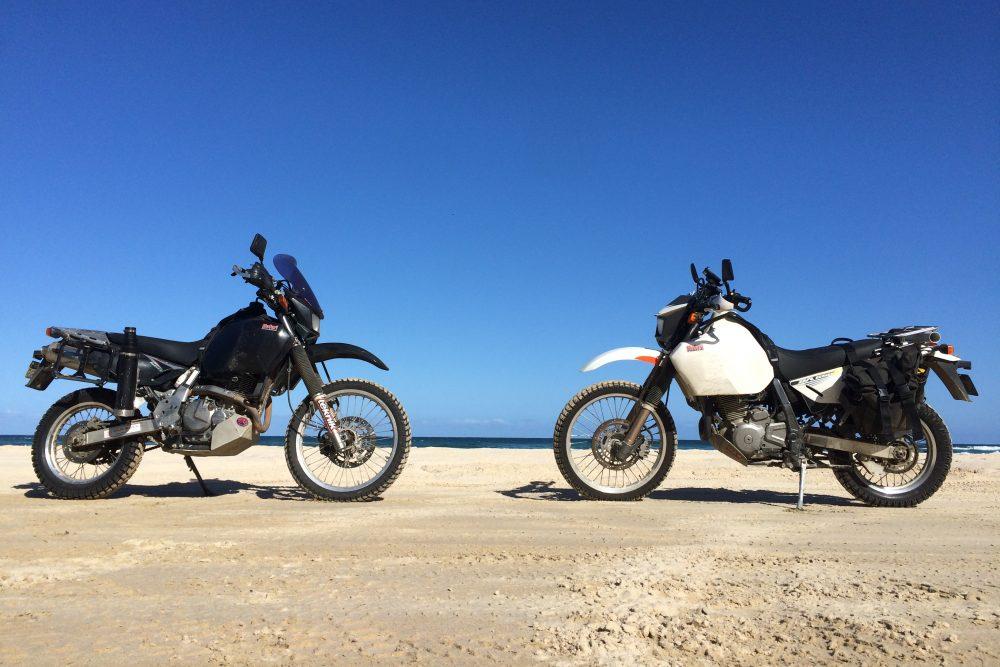 After a few successful weeks on fire trails and gravel roads we were starting to feel confident with this off-road business; maybe slightly overconfident. So when we set off towards Noosa beach in Southern Queensland, where we intended to camp for a few days over Christmas, the sand didn’t intimidate us too much. But as we hit the beach there was 100 meters of deep sand to get through causing my bike to have a little lie down. Despite my now slightly dented confidence, I managed to wobble through the rest, with the grace of a toddler, arriving on the hard sand left by the outgoing tide. Now full of exhilaration we were able to ride along the beach with ease, the beautiful blue sea to our right and white sand under our tyres. 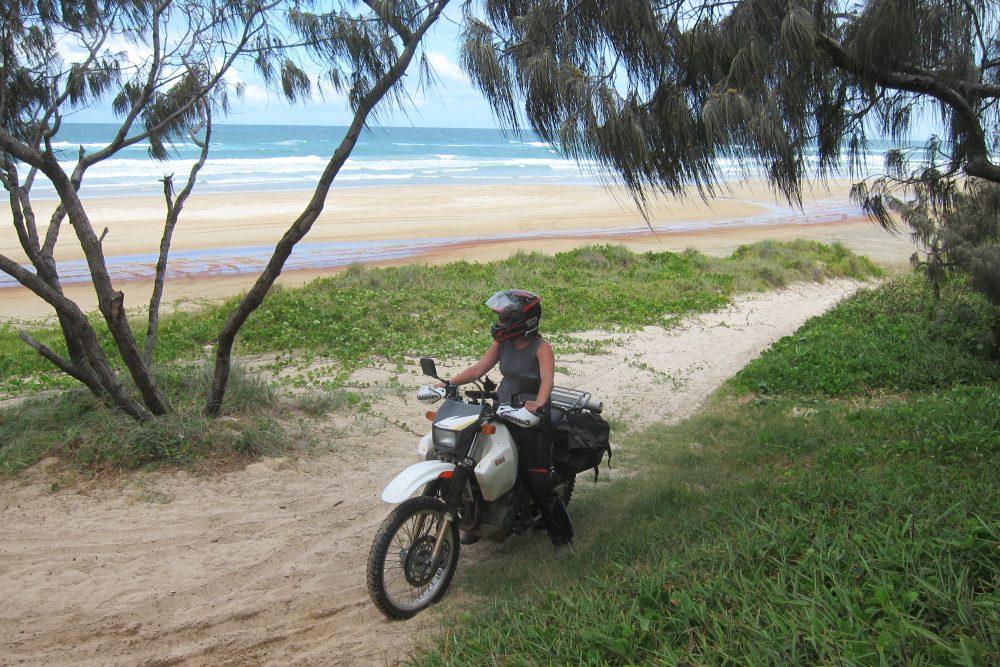 After a restful night and relaxing morning swimming and sunning ourselves, it was painfully obvious I needed some practice in the sand. Malte, with his one and a half days of deep sand riding under his belt, had it all figured out. But I looked like I was trying to tame a bucking bronco. One of the problems I was having is that the DR650 in first gear is still quite fast. Well it is if you want to go really slowly through deep sand. How to deal with this? Control my speed with the clutch. I tried it out and went back and forth across the deep sand starting to get the hang of it, whilst keeping my clutch slightly pulled in to control my speed.

It may be obvious to you at this point that my mechanical knowledge at this early stage of our trip was limited. This meant that when Malte mentioned I could use the clutch to help control my speed, I didn’t have the understanding to realise, if I constantly slipped my clutch I would gradually destroy it. It was working though, and I was enjoying myself. Ignorance is bliss. So the next day we set off on a trip to Rainbow Beach, through long deep sand trails and because I was enjoying myself so much it didn’t matter that I had several little ‘lie downs’ with the bike. I had of course been using my nifty little ‘clutch slipping’ trick all day, unaware of the damage I was causing. 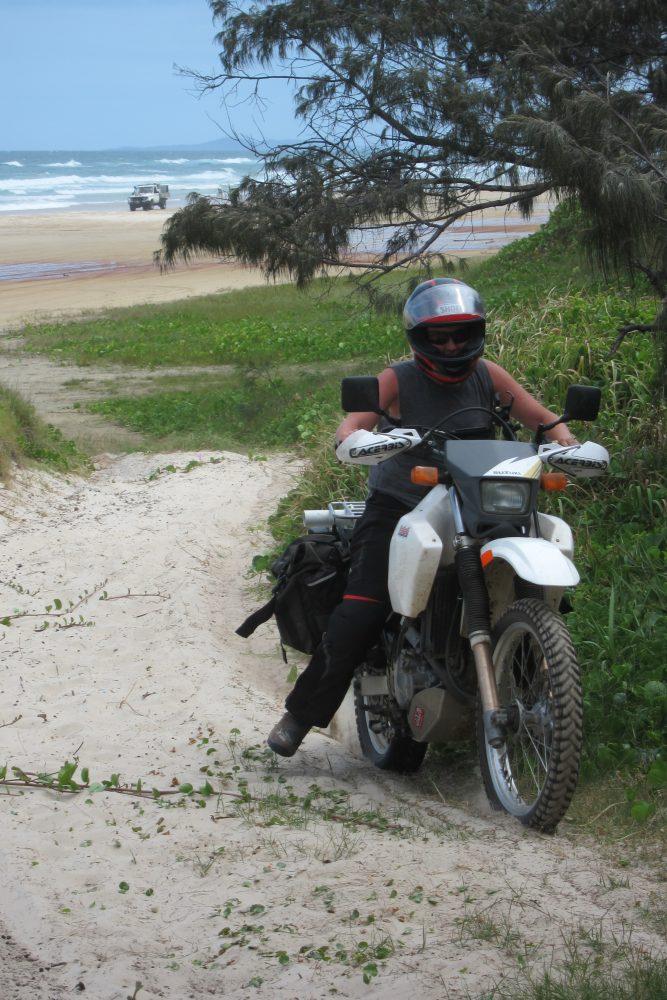 It was Christmas Eve a few days later and we needed to do a supply run into town. I noticed pretty quickly that my bike was struggling through the deep sand and after a while it just stopped. I revved the engine but there was no power getting to my wheel and after letting the bike cool down for over half an hour, there was no improvement, so Malte became pretty convinced I’d burnt out my clutch. As he explained this to me I started to panic, as we had no idea how to fix something like this, especially on the beach, and of course we didn’t happen to have a spare clutch on us. We had no phone signal to call for help and had traveled miles away from our camp. Stranded on a particularly deserted stretch of beach with very little water and absolutely no shade to be found, the situation was very concerning. I started to feel very anxious and Malte was furious that I had so little understanding of how my bike worked, that I’d done so much damage in such a short time.

After some time getting burnt and dehydrated on a beach that felt like a desert, it was with great relief that we spotted a biker heading towards us. As luck would have it he was riding a DRZ and knew his Suzuki bikes very well. Once he’d released my clutch and fiddled with things I didn’t understand, he had a quick test ride. He assured us it would now probably get me off the beach, but in all likelihood I needed a new clutch. This was not good news on Christmas Eve, but it provided me with my first major lesson of our trip: mechanical sympathy. It is not just enough to be able to get through the sand or any other terrain unscathed and upright. I needed to learn to do it without destroying my bike in the process. In a few short days of deep sand riding I had immobilized my bike and it was a hard lesson to learn on this relatively remote beach.

As it turned out our rescuer’s temporary fix got us further than we could have hoped. It got me off the beach and was running reasonably well up to third gear. We did our shopping and as getting a bike fixed on Christmas Eve was totally impossible, we risked taking it back onto the beach. No clutch slipping this time. 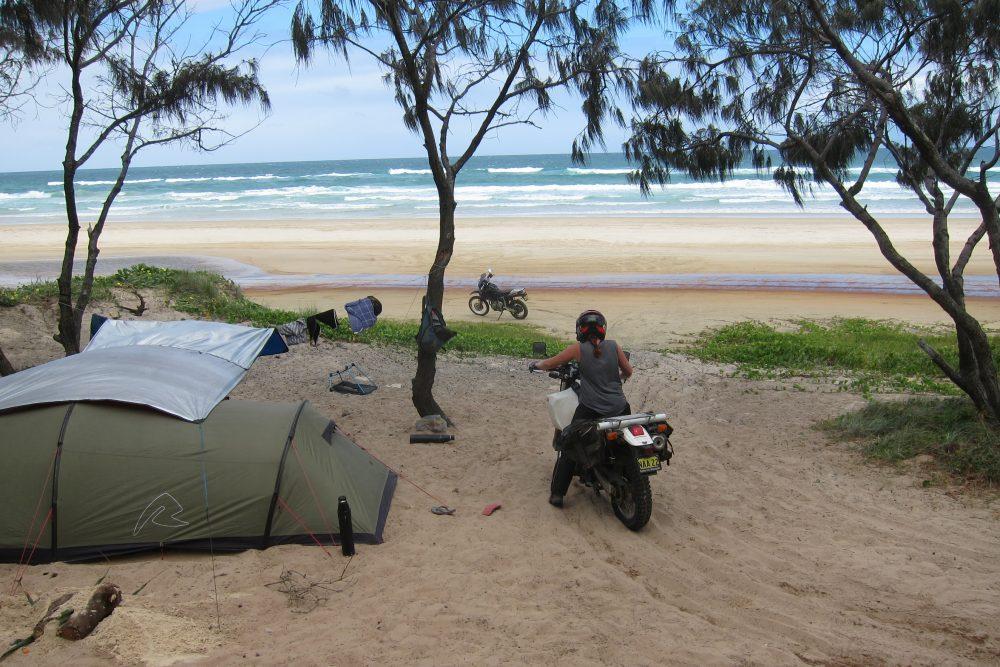 We had a wonderful Christmas on the beach and almost forgot that my bike was limping at best. The surroundings were as near to paradise as either of us had ever experienced, so we relaxed and enjoyed a few treats from our supply run. After we had enjoyed our beachside Christmas, it was time to leave. We were sad to leave our little patch of paradise, but we needed to deal with my clutch. So I struggled with my maimed bike to a campsite we had stayed at previously. We had a contact in the area that we hoped would be able to help with the destruction I had unwittingly caused.

A few days later it was New Year’s Eve and I’d resigned myself to several more stationary days. I was very frustrated at being stuck, feeling quite trapped by my busted bike. My bike is my means of adventure. Without it, I’m going nowhere and I realized I’d grounded myself with my ignorance and carelessness. But as I wallowed in self-pity, I was saved from my anguish when a friendly Irish chap rode up to our tent and uttered my favourite sentence. “Hello, my name is Ken and I’m here to fix your clutch”. 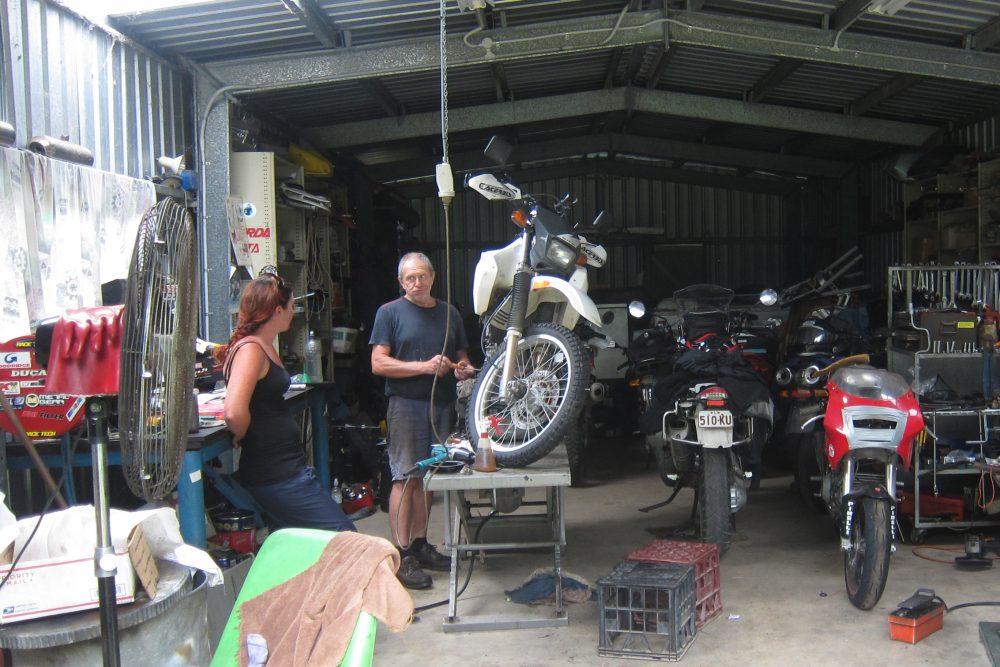 It turned out he was a friend of our contact who had told him of our situation and so Ken had jumped on his bike to come and find us. Ken was a very well traveled guy, who’d been around the world on various bikes more than once. He was also a retired mechanic and now only did private jobs setting bikes up for long travel, but was happy to help out two novice overlanders. Ken told us he’d had so much help from kindly strangers when he first set out, he was just glad to be able to do the same for us.

Getting parts between Christmas and New Year was impossible, so we spent New Year with some great new friends and had a fantastic time. And a few days later I managed to labour my bike one last time to Ken’s workshop, which was full of his 15 bikes, each one with a fascinating story. As Ken worked and explained the intricacies of a clutch I watched and listened carefully, determined at this point to learn how my bike functioned. My bike got her new clutch and I got a shock. I had not only worn the friction pads clean off the clutch plates, I’d even managed to snap one. How I was still able to ride it was a mystery to us all. Ken told us that in his almost 50 years of working on bikes, this was the most damaged clutch he had ever seen. Although this was a little shocking and a bit of a wake up call, I felt a bizarre pride. If you’re going to do something, do it properly. 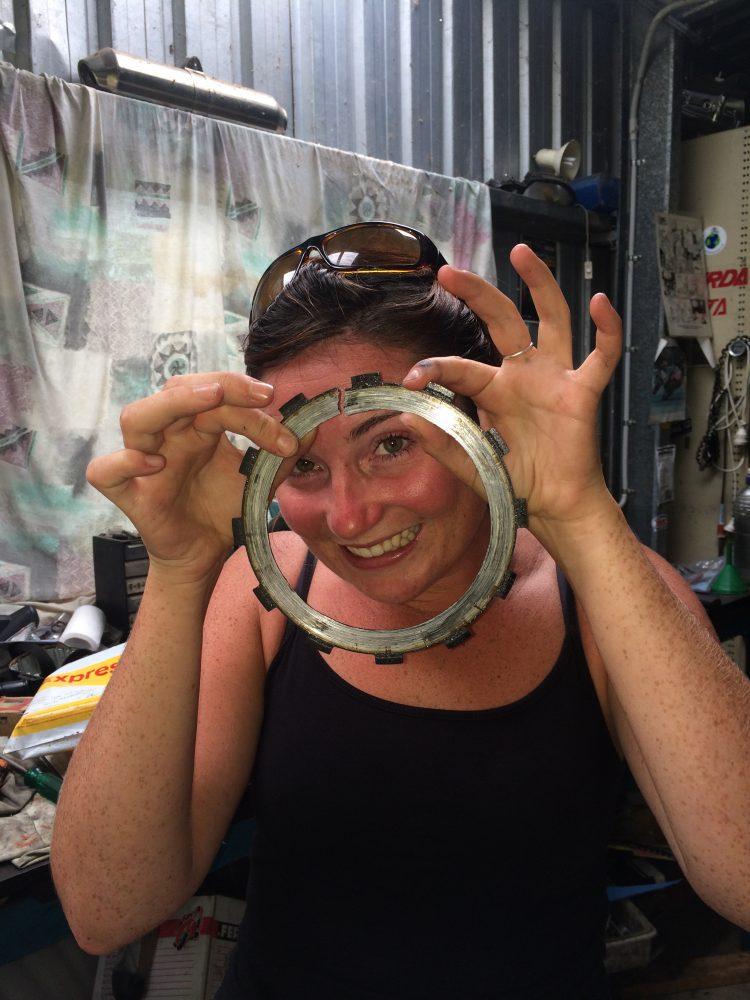 So what did I learn from this self-created drama? There are no short cuts. You need to work hard to develop the skills required if you want your bike to survive in challenging terrain. A working knowledge of how your motorbike works is important. The more you understand your bike, the less likely you are to abuse it. I’d love to say I’ve become an accomplished deep sand rider and an all-knowing mechanical guru, but I’m more of a work in progress in both respects. However, I can now make progress through deep sand without destroying my clutch, even though I still lie down quite frequently. My mechanical knowledge is vastly improved and I can now fix most minor problems and at least understand what is happening inside my engine. We also solved the problem of first gear being too fast, by switching to a smaller front sprocket. This has helped me enormously not only in the sand but in off-road riding in general. Sometimes knowledge really is power.