That’s right! I said, “Man up: Ride like a girl!”, and I’m here with a few tips to make you a better rider.

Let me start by saying if you’re a guy reading this thinking, “No way in hell can riding like a girl make me a better rider”, then please stop here. Take your club and stone wheel (the original Tubliss system) and just leave. This article is definitely NOT for you. On the other hand, if you’re reading this and thinking, “Hmm, I wonder what she’s got to say”, then read on.

In my forty plus years of riding and racing motorcycles, I’ve learned that while I can usually do what the guys do, many times I have to do it differently. Men and women’s builds are different, and we’re wired differently. Let me be clear: For every generalization there is an exception. That said, men tend to play to their physical power, while women play to their finesse and balance. But the fact is, the best riders in the world use both: strength and finesse. So here are some tips on “riding like a girl.” 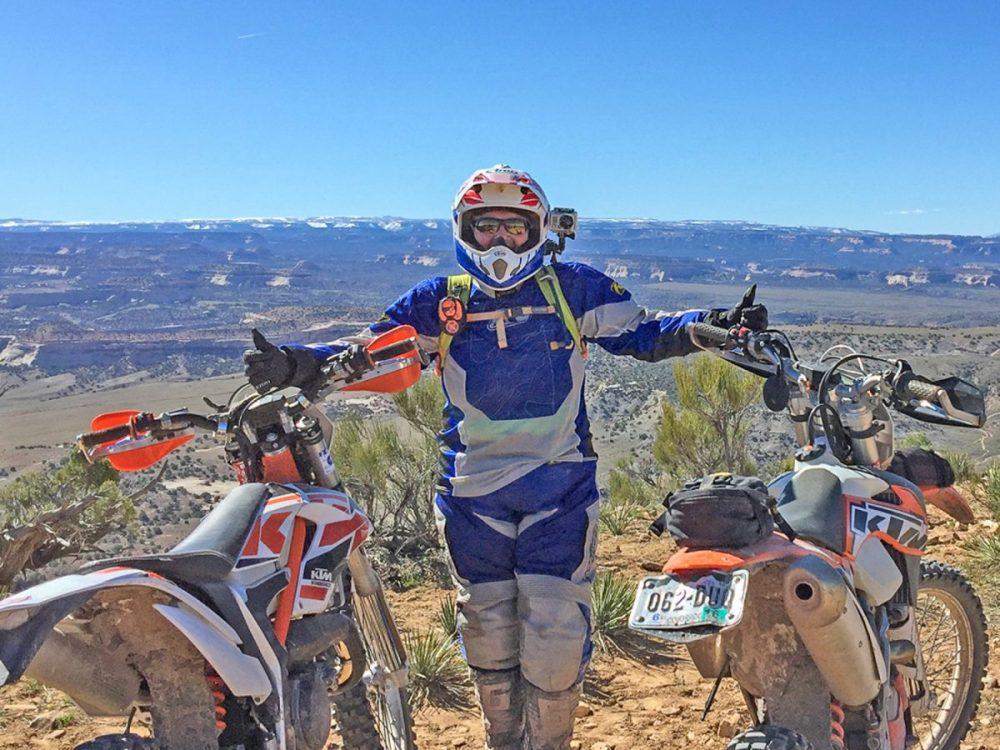 Tip #1: Smooth and flowing is key. I can’t tell you how many times I’ve watched guys get on the bike and twist the throttle as hard and as fast as they can, winding out the gears. Little thought is typically given to line choice or traction. ‘Grip it and rip it’ is their general philosophy. The back wheel breaks loose, gravel and dirt spew every which way as they fishtail their way through a gnarly section. It’s kind of fun to pass them, three quarter throttle, one gear up, with my bike tracking smooth as silk on a nice line.

Line choice is critical. Regardless of how good and strong you may be, if you consistently choose bad lines, you’re gonna get burned.

My first choice in lines is “smooth”. If I can’t find smooth I look for straight. Bonus if my line is smooth and straight. Sometimes I can find a nice long line through an entire section. Other times, you have to piece bits of line together.

If there are no smooth line choices, I look at the obstacles. Unstable, moving obstacles are harder than something that doesn’t move. That’s why I’ll often choose to ride over a larger embedded rock, than a bunch of small loose stuff. The name of the game is consistent traction. Anytime the wheels break loose, especially the front wheel, things can go way wrong. And yes, there’s nothing quite like the feel of a good power slide, but that definitely requires a high level of skill that can sometimes go very wrong.

And let’s be clear: Sometimes the smooth, straight line means floating or jumping over the obstacle. Looking for little kickers to launch off of can help riders clean a gnarly section in a really cool stylish way. And other times, it’s the only way! 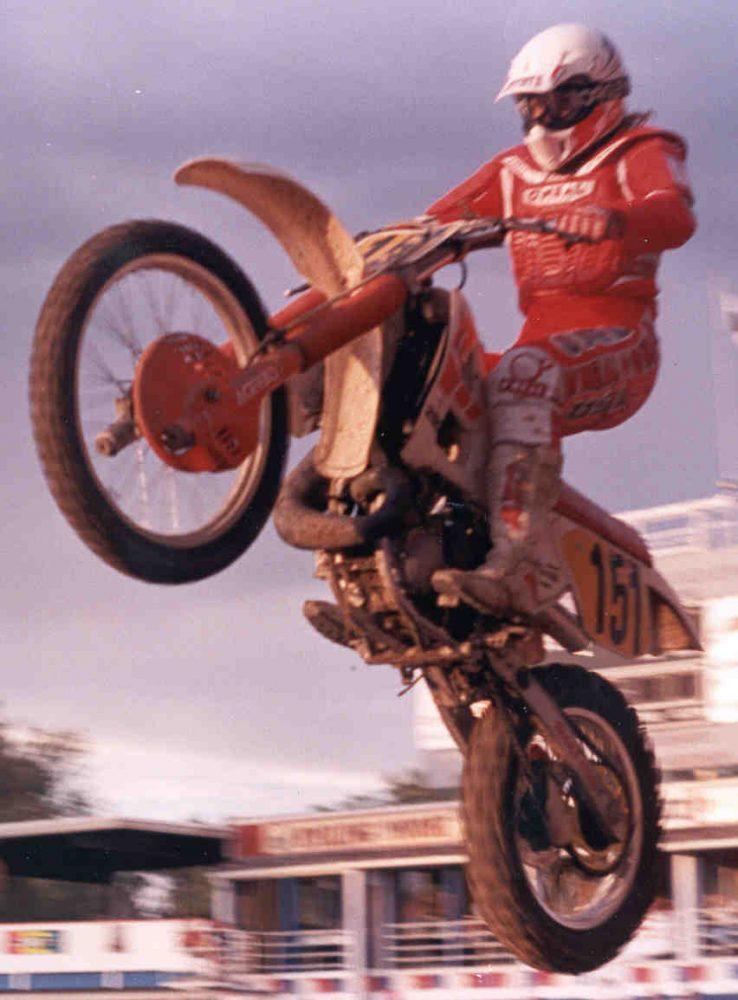 Tip #2: Technical skill trumps momentum. Today’s motorcycles are incredible machines. Suspension is so good and the power delivery can feel endless. Often times we get caught up in the thrill of going fast and having fun. We blast our way through obstacles until we get to that tight gnarly rock ledge at the apex of the sandy turn and bam! We go down. The truth is, riding with momentum makes us think we’re better than we really are.

Real technical skill is learned at slow speed. Real technical skill means being able to fully control all aspects of the motorcycle such as lifting the front wheel, balancing, slipping the clutch, subtle throttle control, and using brakes, throttle, and clutch simultaneously to make the bike squat and stick. This just names a handful of these skills.

I once had the pleasure of riding with former ISDE Champion and X-Games competitor, Nicole Bradford. Watching her ride was grace in motion. She rode with the understated strength, balance, and power of a precision ballerina. During our lunch break we talked about her success racing against men. It was pretty typical for her to pass male competitors on the second and third laps of enduro races. Why? Because her technical skills allowed her to be smooth, consistent, and error-free. Her lap times did not vary. While many of the men rode on the edge of control, hammering their way through obstacles, bouncing into and off of trees. By the end of the race, especially when fatigue set in, Nicole made many smooth, fast passes.

Personally, I love learning and I love that there are many resources. If you’re lacking a particular skill, go find a pro to teach you properly. The money you invest in yourself costs a lot less than those ambulance trips to the ER.

And while we’re on that subject, just because your buddy says he knows what he’s doing, doesn’t mean he really does. A business colleague of mine shared a story of teaching a mixed room of male and female professionals. When asked to raise their hand if they considered themselves experts on the topic of breastfeeding, 70% of the men in the room raised their hands. When asked about their expertise, several men said that their wives had breastfed their children. One guy said he qualified as an expert, because he was breastfed as a child.

Can you guess how many women raised their hands? Thirty percent of the women in the room owned up to being experts at breast feeding. One woman who was asked why she did not raise her hand said, “Because I’ve only breastfed one child. I’d have to read more, before I’d consider myself an expert”.

I’ll let you conclude the moral of the story on your own. But like I said, finding a real pro to help you is a good investment! 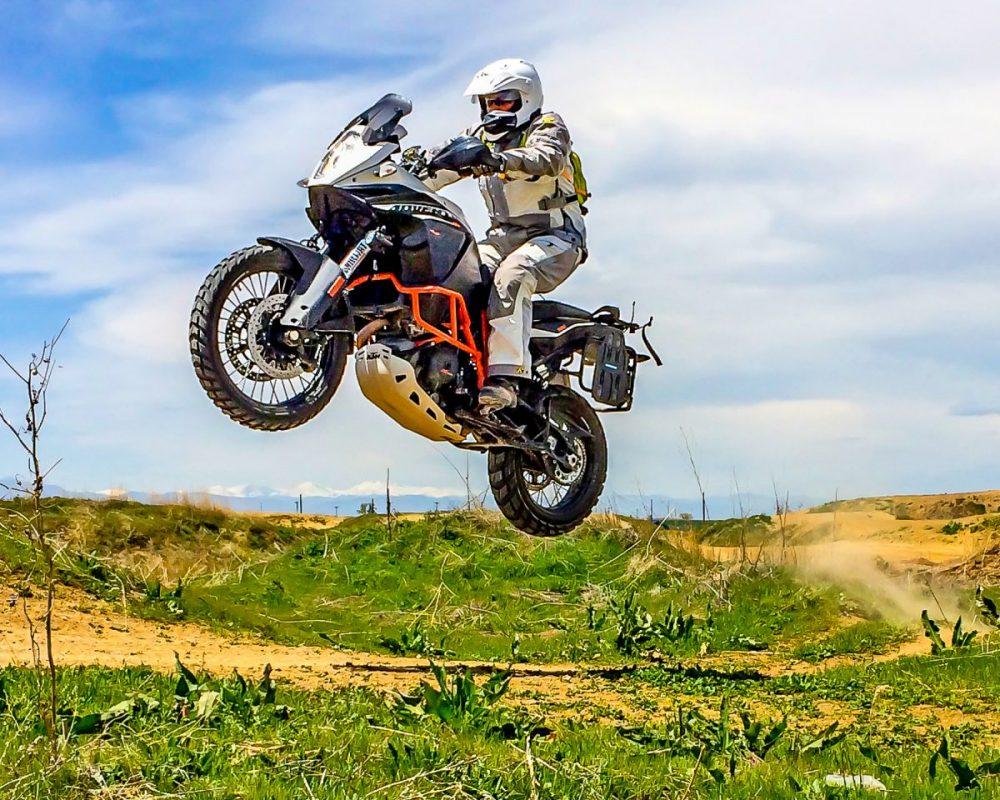 Tip #3: Ride soft. This past fall, I chuckled listening to a story about a fella who was about 6’3”, 200 plus pounds, and rode a GS1200 like it was a single track dirt bike. We all laughed to hear that this rider had broken so many frames that BMW no longer warranted them. OK, let’s get real: There’s no way I can possibly ride like that guy! But then again, do I really want to?

If I’m riding my adventure bike miles from nowhere, or tackling gnarly single track deep in the woods, can I really afford to break my bike? Of course we’re prepared for the occasional flat tire or minor malfunction. But can I really afford to break my frame? Destroy the rims? Crush my radiator? I don’t care how good of a rider you are, if you punish the bike and your body to the point of breakage, you’re not gonna get very far.

After retiring from racing motocross, I spent a few years racing downhill mountain bikes where my dirt biking skills served me well. I consistently finished top three in the expert and pro divisions. Honestly, there were faster riders. The difference was I was fast, consistent, and finished every race. I watched bloody riders carted off the course via stretcher and saw lots of nasty, mangled wheels. I rode then the way I do now: smooth, flowing, and soft.

So the next time you’re riding like you have a personal vendetta to smash the face of every rock, pound the crap out of logs, and bottom your shocks as hard as you can, you might consider easing up a bit and riding softer. Your bike and body will thank you. And, you may be amazed to find that you’re actually going faster.

Tip#4: Be smart. It’s no secret we women are smarter than you boys! Kacey Smith, who has written three books on motorcycling Baja, Mexico and has a long standing dirt bike guiding business, shared this story.

“I was in San Ignacio, Baja, during the Baja 1000 pre-run time. Two guys were changing out the tire tread at Ricardo’s Hotel (popular spot for off-road in Baja). The head honcho guy was instructing the rookie guy on how to change out the tread on the front… The hard wary. After watching the rookie struggle a while and bleed a bit, I popped over and whispered ‘you wanna know how to do it the girl way…?’ He said, ‘Heck yeah!’”

“‘Using the tire-iron, un-do the tread from one side of the rim, just like you are changing the tube out. Then, flip the tire over and do the same thing: un-do the tread from the rim on that side. Now both sides are off the rim and when you stand the tire up, the rim sinks into the bottom of the tire a bit. Grab the top of the rim and just pull it out from the center of the tire by also pushing on the tread in the opposite direction and voila! It’s off. Putting it back on is done in normal fashion (getting it off has several techniques). The way I see it, the girl way is the most efficient way; no pain and all gain. We’re just smart!’”

Next time you’re struggling with doing something the same old way, maybe it’s a good idea to stop and consider if there’s an easier, smarter way. If you look around, you might even spot one of us brainiacs. Ask nicely and we might even help!

Of course I can go on and on with more tips on how to Man Up: Ride Like a Girl. But, just like a sponge, there’s only so much goodness you can absorb at a time. If you’re one of those guys that doesn’t follow instructions and has read all the way to the end thinking, “No way can riding like a girl make me a better rider”, I have a question for you: Are you the “expert” who was breastfed? 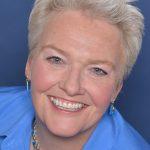 On and off her motorcycle Pat Jacques is a genuine, courageous, authentic BadAss! She’s a pioneer woman who raced men’s motocross, successful entrepreneur, and founder of ADV Woman. In 2016 she hosted the first ever Adventure Rally for Women, by Women emphasizing on range and classroom training. All ADV Woman coaches are women.

Pat’s passion is empowering women through personal and motorcycle coaching. She’s been riding, racing and teaching motorcycling over 40 years. She has a unique talent for breaking skills into teachable pieces, inspiring confidence, and helping riders to achieve tremendous success.