I’m my Own Superheroine

Don’t tell her mom, but BJ Hessler thinks she fell in love with motorcycles because of her mom’s hard core feminism. “As a kid, I got it into my head that to be competent, I should be able to drive, ride, or pilot anything.”  Who needs a superhero, when you can be a superheroine?

Growing up, BJ dealt with a great deal of depression and spent much of her time trying to go faster than the dark thoughts that chased her. As a teenager, she got her driver’s licence as quickly as she could. This landed her a job at a mom-n-pop Italian restaurant where she saved up every penny to take the MSF course and buy a motorcycle. She and her brother secretly shared custody of a Suzuki GS500. With hopes of learning to fly, she went to college in Boston on an Air Force ROTC scholarship. “I was after a whole Top Gun flying-moto-hottie image, plus, I wanted to be able to escape evil like a superhero, by any means necessary. That was my honest motivation – I wanted to be my own superheroine.” Her racing thoughts and depression couldn’t keep up with her when she was riding on the road, at least for a while.

However, even before she could drive, she was seeking thrills and playing with fire. “I was smokin’ pot by about 13 years old and got into harder stuff in high school. That phase of experimentation cost me that Air Force ROTC scholarship and my chance to be a pilot down the road.” That was a hard learned lesson, and she spent eight years clean and sober. “Eventually, though, my craving for MORE and an obsession with being ‘better, faster, thinner’ lead me back to drugs. So even though on the outside I looked like I was killing it at life – I held a job as counselor and Spanish translator at a community health clinic, while getting my Masters of Science in Public Health, and riding a Buell XB9R Firebolt around Denver, teaching yoga, and dancing in a burlesque troupe – I had started back down the slippery slope of addiction.”

In 2007, she hit her first “bottom” and went to rehab. This time rehab stuck as far as the harder drugs, but demons were still chasing. Drinking and smoking marijuana were a welcome escape for her. She found herself purchasing a pink 125cc Buddy Scooter so she could drink and drive ‘safely.’ “I thought it was pretty noble of me to stay away from my car and not risk hurting others if I was driving under the influence.” BJ rolls her eyes at herself as she tells this story.

She found a group of people that were like her – they drank and rode scooters. “It was a ton of fun, riding long distances to rallies and meeting new people all over that scene.” But she realized that her drinking was different. She realized she was powerless over alcohol, and her life had become emotionally unmanageable. She was trying to outrun her thoughts and feelings, but she couldn’t go fast enough.

When the rallies were over, she woke up wanting to kill herself. “By that point I had an advanced degree, two bikes, a car, a boyfriend and a baller job. I just didn’t want to live. In retrospect, it was the lack of real connections to other people. Riding motorcycles was a solo activity. In my sober moments, it was my form of escape from myself. I could go fast, be in the moment, not need a man to validate me.” But even her motorcycle was not fast enough.Finally admitting she was powerless over alcohol, she started the long road of recovery, facing her inner demons and building a new life for herself.

In the process of recovery, BJ discovered off-road riding. It all started with a Kawasaki Versys 650. She realized that with 20 years of street riding, she still got nervous when the road turned to gravel or dirt. This realization only pushed BJ to challenge herself. She borrowed her brother’s bike, and hit the trails. “On his KTM EXC 450, I experienced a whole new thrill and exhaustion that I had not known in recent years of road riding. I’m not sure if that’s when I got hooked though. I was pretty intimidated by what looked like somewhere I should be hiking, not taking a fucking motorcycle!”

In 2015, BJ and her father toured Patagonia on BMWs with Ayres Adventures. “I was on an F700 GS and the guides were so comfortable-looking and super skilled on their BMWs regardless of the terrain, that I was really encouraged to step up my riding. Growing up in a family that valued travel, I also knew I wouldn’t be able to see much of the world by bike if I didn’t get proficient on ADV bikes. By sheer dumb luck, I had an opportunity to fill a spot for a friend of a friend who had to cancel last minute at the BMW Academy’s Off-Road school. That was a humbling experience in torrential rains and subsequent South Carolina slick clay! But I kept picking myself, the bike and bruised ego up.” 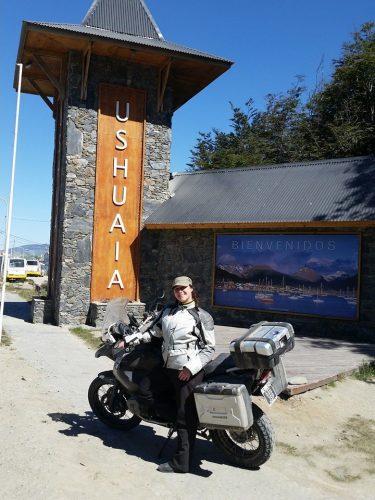 Armed with a CRF 150, a small trailer, and her Versys, she has been riding off road in Virginia, Pennsylvania, and West Virginia. She’s had more coaching, and access to trails with a new start up company called Xplor-Int.com. Talking about this, BJ realized she really just started riding off road this year. “I’ve got to say it’s been one of the best years I can remember. I have formed some of my most endearing friendships in 2017 – all in the moto community. I have let myself be vulnerable and be ‘a newbie’ all over again and it has been paying off.”

“I’m not sure one begets the other, but my recovery and off-road-riding have definitely been a benefit to each other. The intense physical demands of dirt biking, and the mental acuity needed to stay safe over rocks and roots is definitely not something I want to do stoned or hungover! Off-roading lights my fire in a bigger way than road riding ever did, and I find I’m orienting my life to accommodate as much saddle time as I can. I’m not just white-knuckling staying clean and running from my inner demons. I have this super fun, exciting thing to run toward on my weekends and to plan vacations around.

“Now that I have a few years sober and am working a recovery program, I can see that the seemingly coincidental opportunities that have gotten me into the ADV scene, are really a gift of sobriety. I wouldn’t be the person people invited to cool, dual-sport events, ask to teach basic dirt bike courses, or spend rainy days wrenching with if I was still the completely self-centered asshole I was back in the day. Alcoholics don’t think much of ourselves, but we’re all we think about!

“I still have to work really hard to get away from self-centered fear and show up for others. Dirt biking especially is showing me that riding is definitely NOT a solo sport. To that end, when I bought my little Honda, I actually talked the seller into a deal for his old Yamaha TTR230 as well. I’m working on fixing that up so that I can give the gift of trying out dirt bikes to my friends like my bro did for me. It’s such a hard thing to ‘try’ dirt biking – so much gear, you need a trailer or truck, or you don’t know where to go. It’s a pretty big barrier to entry, so as a big opportunity for service, I want to be able to take some of the gals I ride street with out in the woods with me. I’m not sure it will ever be a full time career move, but I’d like to be coaching and sharing my experience as a female rider with other women who are opening up their worlds to ADV riding too. Gaining skills every weekend that I get dirty with my bike is helping me find both physical strengths and an inner joy and freedom I never experienced before recovery. Service keeps me sober. I want to help other women find their inner super-powers too.”

Here at Women ADV Riders Magazine, we see BJ continuing to do great things. She’s been all the way to Ushuaia and says, “Since I’ve been to one end of the earth, I might as well go to the other.” The Dalton Highway and Northern Lights must be in her future. Also on her list are the Stelvio Pass in Italy and Kruger Park in South Africa. BJ, thank you for sharing your story. To us, you are a superheroine.

Like this story? Check out DRUGS MOTORCYCLES AND THE ROAD TO FREEDOM!

PrevPreviousThe Truth About Africa: Adventures of a young woman’s first forays into the world of riding
NextADV Woman Rally: More Than Meets The EyeNext