Steph and Rhonda: 250cc Around The World

Stephanie Jeavons is one of the first women to ever ride a motorcycle in Antarctica; currently resting up in British Columbia, Canada, Steph is busy writing for a bunch of ADV mags around the world and planning her next epic ride.
Small motorcycles are making a big splash in the ADV riding scene, so we had a chat about Rhonda the bike – and what’s next for Steph! 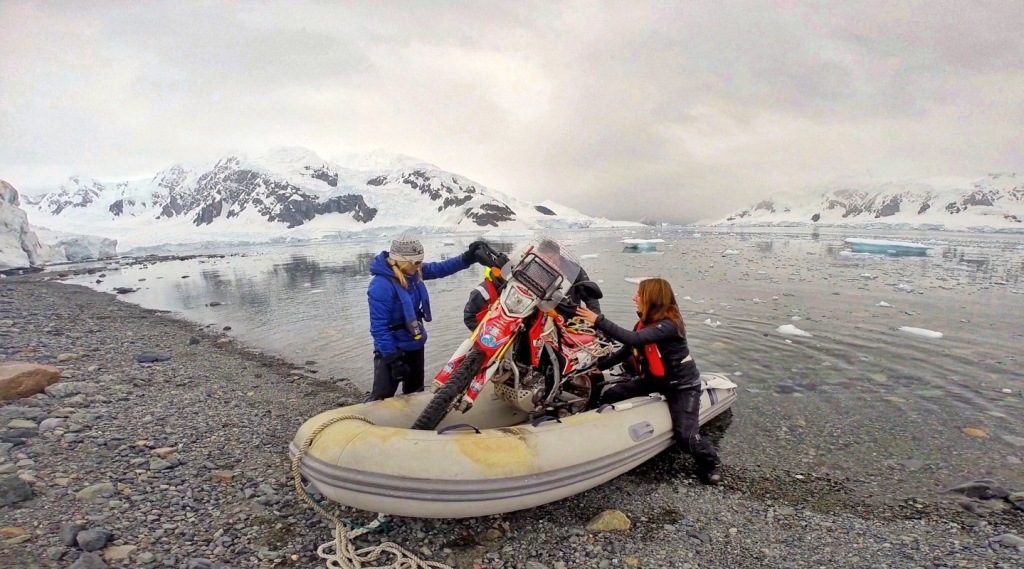 – Seeing you and Rhonda the Honda on the road is incredibly inspirational! How did you choose that bike in the first place?

– I used to own and manage an off-road school in the UK, and we ran with the Honda CRF range. I knew they were simple and reliable bikes and not having a great amount of mechanical skills, that is something that appealed to me. I also wanted off-road capability and a light bike that I could pick up on my own. Those people that say ‘it’s ALL about technique’ have never had a spill on their own after several hours riding on a hot day with a heavily laden bike! The lighter, the better. A small bike also offered cost savings on fuel and shipping. It just made sense!

– If you had to do it all over again, would you still go on a 250cc or choose something else?

– I like to mix things up a little and so for that reason I’d say no! However, I would still choose a light bike with the same capabilities. I cannot see myself ever choosing a heavy touring bike for the type of riding I like to do. If I am on my own and I get into trouble I want to give myself the best possible chance to be able to save my own ass!

– How do you pack a small dirt bike for a round the world journey?

– Necessity is the mother of invention. These days there are a lot of luggage options for smaller bikes. People are starting to see the light, and the manufacturers are responding to demand. Of course, you have to be fairly disciplined in your kit choices but that can be liberating in itself. One pair of trousers means never stressing about what you’re going to wear!

– Do you work on your bike yourself?

The one thing about having reliable bikes is that you don’t often need to fix them. I have had no mechanical failures in nearly 3 years. Sometimes I feel I would have learned more had I chosen to ride a Harley or something equally as unreliable! However, I do servicing and tire changes when needed. I am also pretty good with duct tape and cable ties! I am no mechanic!

– What was the biggest challenge for Rhonda so far?

– Dealing with the cold and salt water that Antarctica threw at her. She was strapped to the deck for 5 days as we crossed the Drake Passage on a sailing boat. On arrival, I washed her down and put the battery back in. It was pretty damn cold but she started first time on the button! It was a proud moment for sure.
We did have a slight hitch in Sumatra too. The subframe snapped under the weight of a particularly heavy top-box that I had at the time. We had also been tackling a lot of rough and washboard roads and trails. The combination of which was eventually too much for her skinny frame. It was quickly repaired though (Asia is good for that) and she has never been stronger!

– While small bikes are awesome most of the time, how do you cope with long stretches of boring flat tarmac? Do you listen to music?

– YES! I listen to it a lot. My favorite day is a sunny and warm one listening to music on an empty twisty road! The bike will do a good 70mph though and I can live with that most of the time. Long boring stretches just require a little more imagination. Change your mindset and that time can become your friend. The times I had wished for a bigger bike have been when I had lots of lorries to overtake on bendy roads! Not having that extra top end speed really hones your senses and means your time and distance calculations have to be pretty accurate!

– What was the most difficult ride so far?

– I guess in general India was the toughest. I was there mid – summer so it was stupidly hot! That combined with the chaotic traffic and inquisitive crowds led to many uncomfortable situations. It gave me some of my best and some of my worst experiences so far. Would I go back? Like a shot! It was an adventure with a capital A!

– Is Africa still in your plans?

More so than ever. My route plan keeps changing but it also keeps increasing! Watch this space!

– You said Rhonda gave you the opportunity to travel slow and experience more. Are you now on the road indefinitely?

I don’t think so. This was just one dream. One chapter. There are many other things I would like to do. Chickens and a small pack of dogs for example! Not easily achieved on the road! I’m in no rush, though…