Conquering the Back Country Routes

HOLY COW! Stunning scenery on steroids, majestic elk, mule deer, jackrabbits, free-roaming cattle, and idyllic campsites helped to soothe the major ass-kicking I’ve taken over the last three days. Sections 3 & 4 of the Arizona Backcountry Discovery Route, through the National Forests Tonto and Apache-Sitgreaves from Globe to Winona, have presented the most challenging terrain I’ve ever ridden on my GS. A roller coaster of emotion – from having a blast and feeling confident one minute to being paralyzed by fear the next. Such is life. The trick is to gracefully ride with it all.

Shal has barely been challenged with the terrain as she confidently approaches whatever’s in front of her without hesitation. My sense of defeat during the five gnarly rocky descents where she had to ride my bike later transformed into a “Hell Yeah!” sense of accomplishment as I went on to tackle terrain on my loaded GS I would never have imagined. But then again, I’ve only been riding for two years, so there’s plenty of room. The challenges take form in rocky hill climbs and descents, deep ruts, miles of annoying washboard, and stretches of recently-grated loose surfaces. The heat brings it to another level. I cried twice during the past three days – from the sheer intensity of it all. Yesterday, it took us 10 hours to get through 105 miles. And yes, it’s worth it. 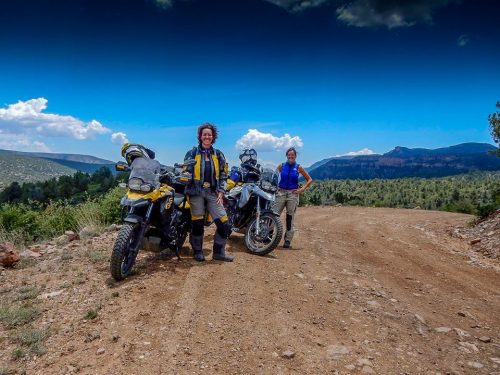 As much as we both wanted to get through some of this stuff and into cooler temperatures, we forced ourselves to take rest and food breaks every hour or so. Despite our aching, tired bodies we took moments to appreciate the magnificent landscape and wildlife of central and northern Arizona that we would not have the opportunity to see (and dodge!) had we not ventured into the wilderness of the Backcountry Discovery Route. Crazy beautiful.

The pain in my hands and shoulders from the vibration and repetitive impact was excruciating. At one point Shal asked about the hissing sound I was making (our helmets have a communication system.) I was practicing labor breathing techniques that I learned 24 years ago to work through the pain. Hsss…shisssh…hsss…shisssh…Seriously, it got to that level. Hopefully, the pain will decrease as I build my strength and Shal won’t have to listen to those annoying sounds through her helmet.

Shal had her own issues. Painfully raw blisters on her hands and a serious lack of energy affected her riding experience. The 10-hour day took its toll. Once she realized that she just wasn’t taking in enough calories we pulled over, squatted under a scraggly Evergreen tree and heated up some re-hydrated spaghetti. Things improved dramatically. Along the final few miles, we cheered each other on and sang songs into our headsets in near-exhaustion to finish the section. Teamwork at it’s best. And yes, we’ve had a couple of blow-out fights. But that’s another story.

So why do we do this if it creates such um…discomfort? We asked ourselves that question on video during one particularly challenging stretch.

CHECK OUT STEPH AND SHAL’S PROJECT FOR WOMEN ADVENTURERS: SHEADV.COM