BY KRIS FANT AND MANY RIDERS

I stood at a Kawasaki dealer’s counter, brows raised and heart pounding in my chest, staring aghast at the rep behind the counter as he belittled and humiliated women. They were stupid; they made too many mistakes; he’d never get laid.

He referred to my friend’s cousin, a former employee as “a good one! She was actually smart, not like other girls! She didn’t make mistakes! She and my mama set the bar high! They set it hiiiigh. I’ll never get laid now!” he chuckled. As he woman-bashed aloud to my male friend, we were both too dumbfounded to respond. I looked up at my friend’s face, seeing his obvious discomfort. He continued his belittlement for some time, my friend mute with shock and me shaking with rage, too upset to confront him, which I now regret.

As we walked out the sliding glass doors, I turned around and went back in to find the manager, despite my desire to get away as fast as I could. With the manager unavailable, an older rep heard me out, embarrassment spreading across his face. “I’m sorry! I’ve been telling the guys for years they can’t talk like that anymore. We’ve got more and more women clients!”, as if having had less women clients in the past made it okay to talk like that in the first place.

It is stories like these that get shared in the women’s motorcycle forums. From being ignored, to only having scantily clad women draped over bikes, to outright condescension, women share these stories in private, because in public we have to be tough, unfeeling, “one of the guys”. This can be intimidating for women just starting out on this journey. We asked our readers to anonymously share their stories with us. We asked for the good, the bad, and the ugly, and while the bad was sometimes really bad, read on. There are dealers ready to lead the way by providing stellar service to everyone who walks through their door. And, with a bit of planning, we women can help keep the less progressive attitudes in check.

The Hunt for Equal Rights Motorcycle Service: What Turns Us Off

“You don’t want that helmet, the women’s helmets are over here.”

“You can straddle any bike with those legs.”

“I was sitting on a bike and a sales person said ‘now you just have to say Vroom Vroom!’”

“I had enough cash saved to pay for a bike in full. I tried to get the attention of several sales people on two occasions. When I tried to talk to them, they walked away. I stopped short of literally throwing my cash on the floor and found another dealer.”

“If I go to a dealership with my husband, nine times out of ten, they talk to him, not me. Even if he says ‘she is the one shopping today.’ Nobody will talk to me until after they talk to him.”

“I’ll give you thirty percent off if you let me sniff your seat.”

Women have been riding motorcycles since motorcycles were invented, but are the minority in the riding community. Women who pilot their own motorcycles have grown to fourteen percent of the riding population, and another eleven percent of women riders are riding as pillions. We talked to dozens of women about their experiences with dealers, mechanics, and retailers to truly understand what women want.  The women we talked to found the following situations to be the most discouraging: 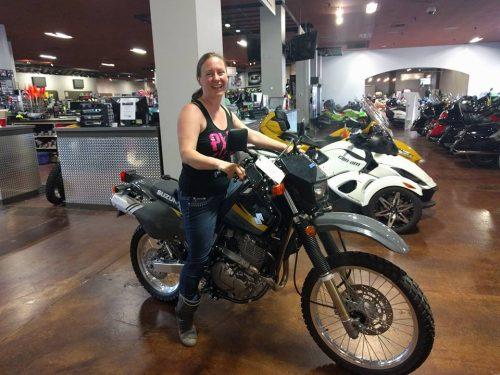 The Hunt for Equal Rights Motorcycle Service: What Turns Us On

“Eurosport in Asheville, NC was the first dealer I have EVER walked into where I received immediate service and it was assumed that I was the rider, instead of otherwise – I didn’t ever feel like an impostor.”

“Triumph of Seattle was the kind of place where the salespeople didn’t blink much at a young woman riding the world, and treated her like they’d treat any of their male clients: with respect and courtesy. It was a place that hired female mechanics and staff people to be more than a pretty face in the clothing section, because they didn’t have the biases so many others still cling to. And for that, I’ve been very grateful.”

“The guys working on my postie considered it an honour to be ‘part’ of my journey and they went above and beyond – often charging me only a nominal amount for the parts or time.  The best treatment I got was Micks Motorcycles in Gawler, South Australia.”

“In thinking about my experiences, positive and negative, I am finding that I’ve had the most positive reactions when I deal with salespeople who are enthusiastic about motorcycling. And who don’t discount me or ignore me because I am a woman.”

“I spent three hours trying on helmets and talking to the sales person, and then he referred me to a competing dealership because they didn’t have one in stock that he thought I would like. He was right, I bought the one he recommended, and now I send all my friends to see my guy at ProCaliber Vancouver.”

“Every time I walk into the local Cycle Gear, I am greeted by name.”

One thing stands true: We are turning a corner. Women ADV Riders heard far more positive stories about dealerships than negative ones. When we asked what women want, they said “respect”, and “like any other customer.” The following positive experiences were highlighted more than once in our interviews with our readers, and show us what women want:

Ladies, it’s up to us to change our experience in this world. We talked to riders, employees, dealership owners, and other motorcycle enthusiasts and came up with these tips to empower you to get the service you want.

In the moment, it can be easy to go along with the status quo. Instead of waiting for a sales person to acknowledge you as the rider, introduce yourself. “I’m Kris, and I ride a DR650. I need help finding a dual sport helmet.”

2) Give salespeople the benefit of the doubt

Instead of assuming someone is purposefully being sexist, assume they haven’t encountered women who ride before, and be friendly and assertive as you shop.

When told “these are the men’s helmets” my favorite response I’ve heard was “where does the penis go?” Another woman teased a guy at a parts counter because he couldn’t find the brake rotor she’d placed on hold; he assumed she was picking up gear. “Did you assume I was looking for gear because I’m a woman?” I’d bet neither of these guys made that assumption again.

4) Do research before you enter the store

There are times people are willing to let their male or female companion take the lead because he or she is more knowledgeable about motorcycles. Do your research, take notes with you, and if you don’t understand something, ask, rather than depending on someone who is already in the know. This can be the best way to learn, and keeps you, the consumer, at the forefront of the conversation.

If you have tried being direct and you have tried humor and your needs are not being met, ask to speak to the person in charge. See what their attitude is like. Are they willing to acknowledge that you were treated unfairly, or are they defensive or dismissive?

If you have done all of the above, and are still dissatisfied, the internet has opened a door for us to share our experiences.  While some people prefer to vent on social media, this does not create the social change we are looking for. There are many places to leave reviews about dealer experiences. Find them all. It gives the dealer a chance to respond publicly if they are paying attention. And if they do not, it gives other shoppers a forewarning about the service they may receive.

7) Give credit where credit is due!

Talk up the positive experiences, send your male and female riding buddies to stores where everyone is respected. Leave positive reviews everywhere.

Women ADV Riders wants to help give credit where credit is due, and will have a Dealer of the Month feature. If you have had fantastic service this month, drop us a line at womenadvriders@gmail.com. We want to share your story!