Fit4ADV vs Me: How Lisa Thomas Made Me an Offer I Couldn’t Refuse

Fitness and I have a long history – and it isn’t pretty.

I’m a sloth: I’ll run if I’m chased, and I’ll play sports if it’s fun, but jogging or going to the gym? No way. I used to ride horses (fun) and hike (you get to see stuff), but whenever I attempted to exercise just for the sake of exercising, I never lasted.

My relationship with food was even worse: yo-yoing from extreme dieting to blissful, sugary gluttony, and everything in between, I could never get it just right. The last time I saw my waistline – and owned a dress – was around 2009.

And at some point, I’d decided it was okay. Learning to ride a motorcycle, traveling across South America on a small Chinese motorbike and finally, becoming a two-wheeled digital nomad was a game changer: I could travel indefinitely, work whenever inspiration or poverty struck, and ride my bike on and off the road. 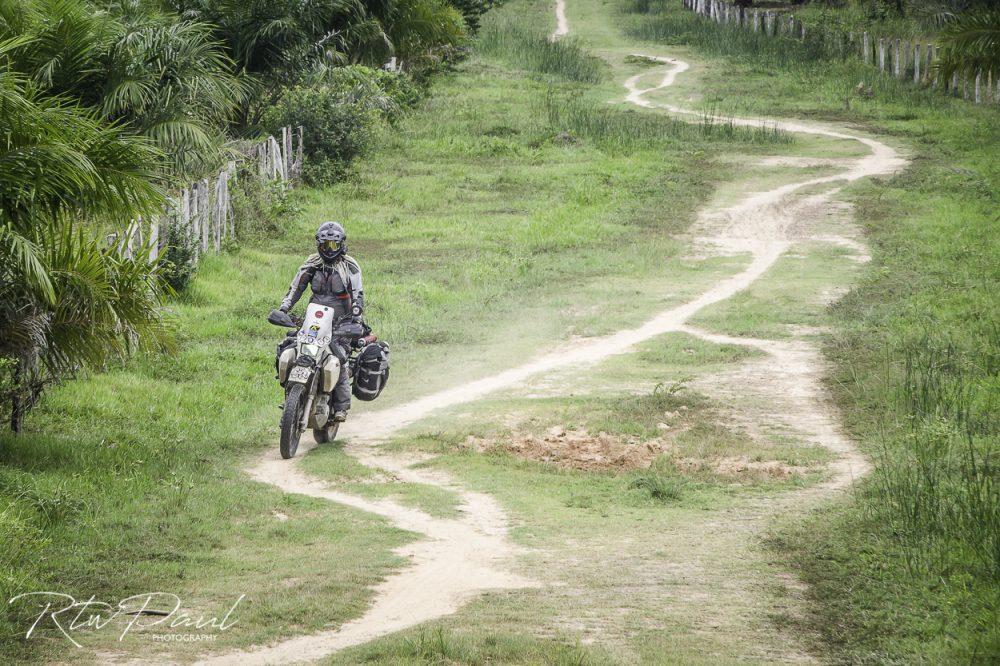 All this off-road business, I figured, was a workout enough; who needs yoga when one is conquering boulder-littered paths, deep sand and muddy jungle tracks on a daily basis!

Except, of course, I wasn’t really riding those rocky mountain passes or tropical trails every day. In fact, while I did a lot of off road riding, there would be weeks and weeks of either just sitting on my bike covering distance, or sitting in front of my laptop, trying to finance said distance.

But then 2017 came around, and with it, a wake-up call. Out of the blue, I was diagnosed with severe bone loss. Due to a funny gene in my DNA (thanks, grandpa!), my jawbone had begun to disappear; in November 2017, X-Rays revealed that my upper jawbone had shrunk down to a two-millimeter ribbon. Following an extremely painful and costly bone transplant surgery, I’d recovered, but the doctors warned it may happen again.

Fitness and I needed to have another chat.

Since that scary November, I’d quit sugar and processed foods (well, mostly) and eat raw, whole foods (um, most of the time). I’d replaced Cola with water and learned to be creative with snacks on the road. I felt better and healthier, but still couldn’t bring myself to exercise. Until Lisa Thomas made me a deal. 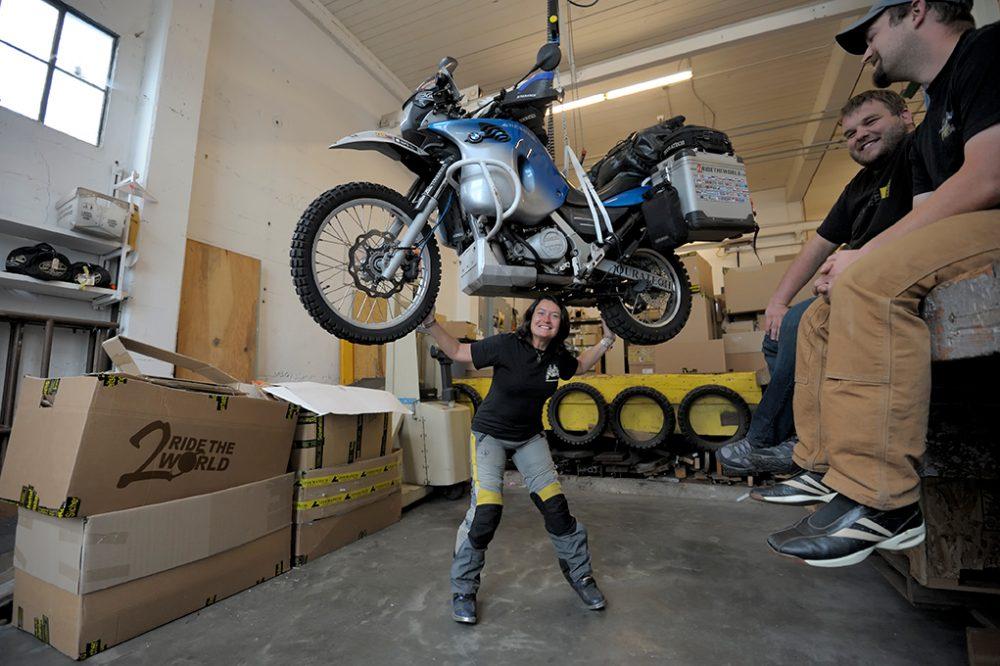 Lisa is a legend in the motorcycle adventure world – but what most people don’t know is that she’s also a fitness guru, a chef, and an all-round badass extraordinaire; imagine Samantha Jones with an English accent, riding a motorcycle around the world. 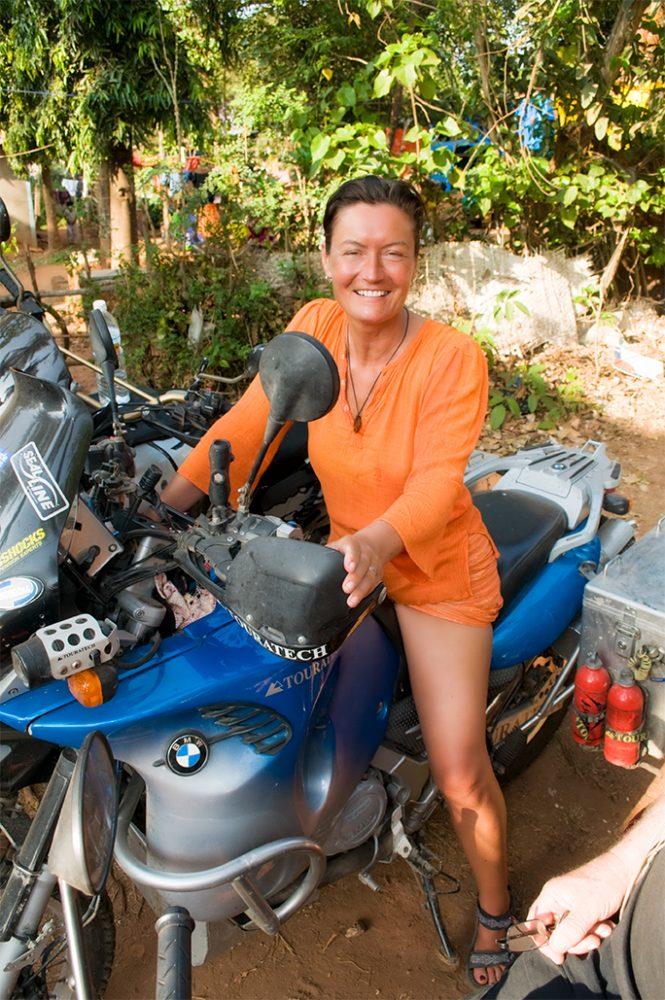 “Try out Fit4ADV, and within a year, you’ll buy a little black dress”, – Lisa said to me.

Hrrmmmmmpfffff, was my first thought. I don’t do dresses, dude. But then I figured, if I don’t take the chance now, I’m doomed. I will forever sport a three-pack, get out of breath after climbing a couple flights of stairs, and struggle picking my bike up. 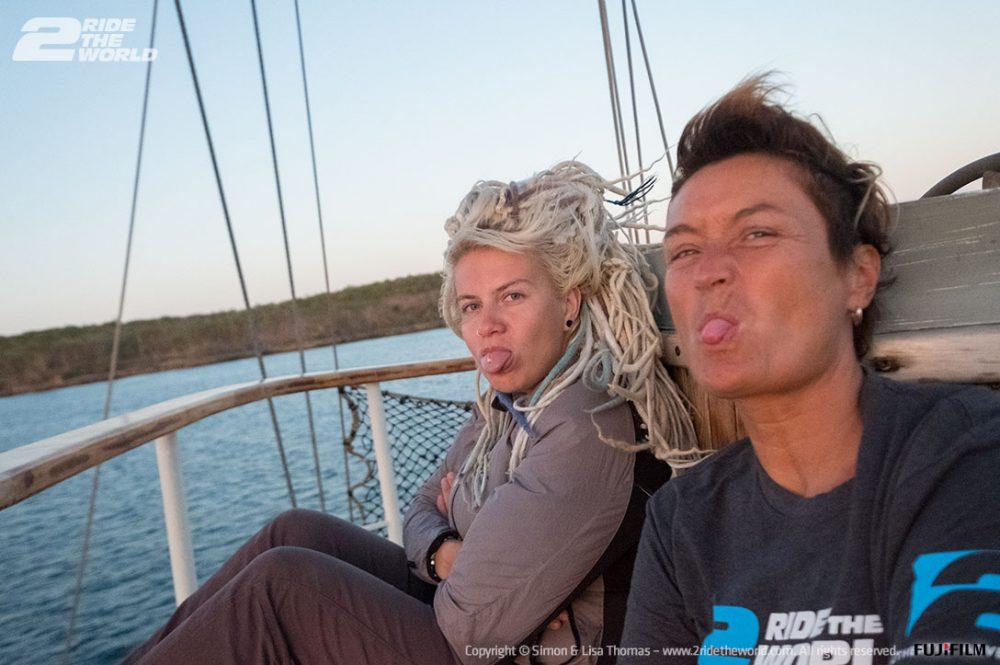 We’re out in the middle of nowhere, and so far, I’m terribly impressed with myself. I had avocadoes and tuna for breakfast; black coffee, no milk. Veggie soup and grilled meat for lunch, four hours of light off road riding, and an hour walking around exploring Cepita, a tiny, quiet town in the Crystal Valley.

Looked at Lisa’s exercise routine in the evening. Figured I’d done enough today, so looked at her stretch recommendations instead. Did a half-squat while brushing my teeth. Very impressed and pleased with self. 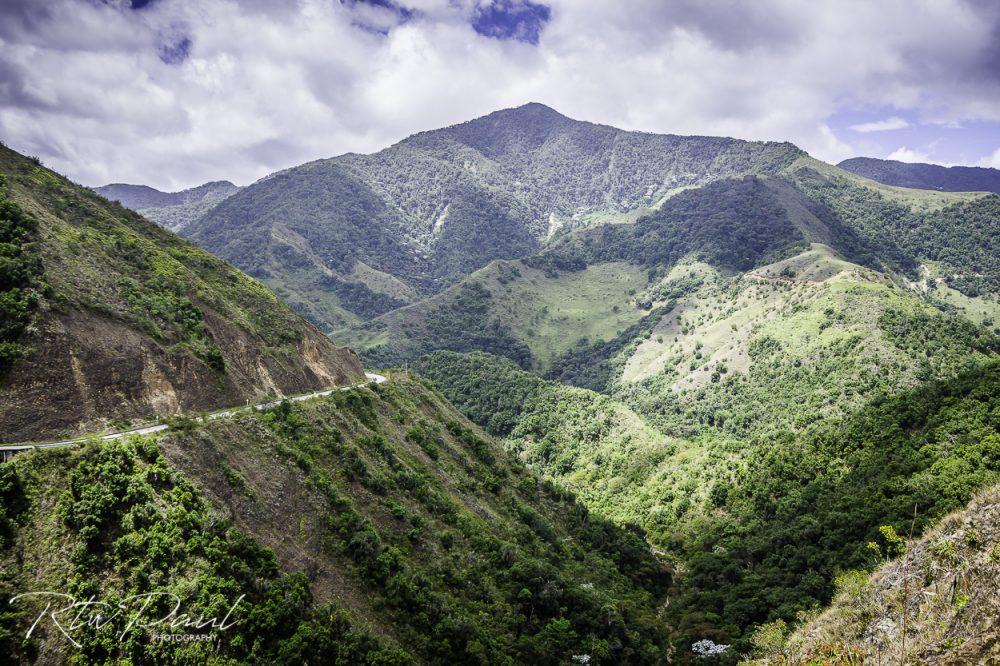 Feel v. virtuous because we rode off-road all day long. I think I’ll just count this as exercise. 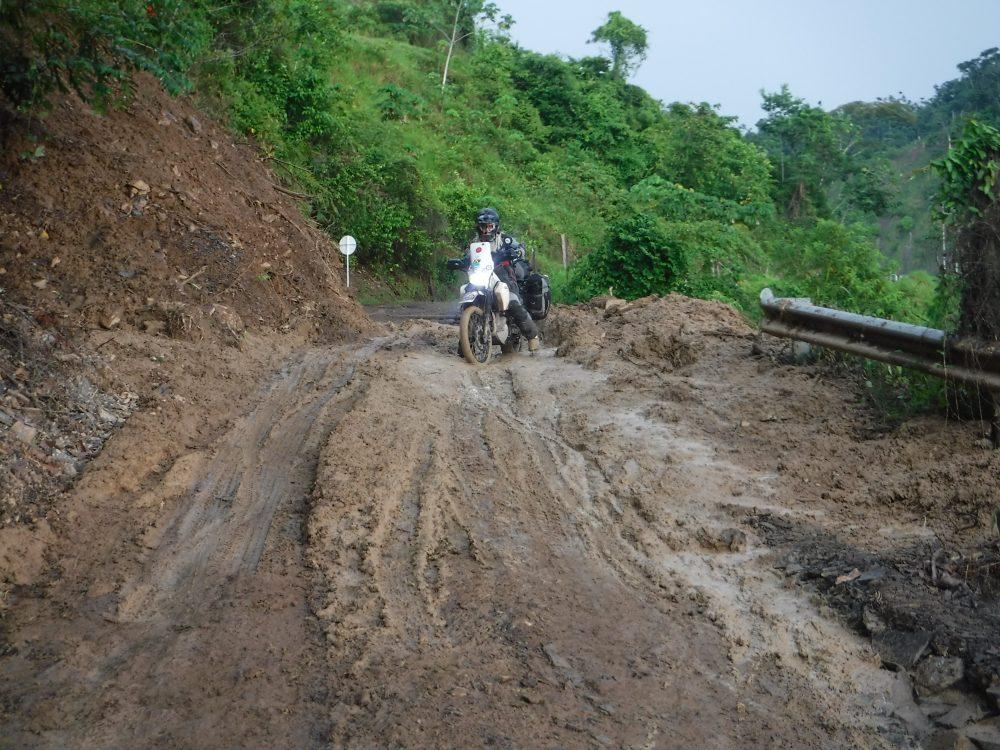 Feel v. guilty about yesterday’s pizza. It wasn’t even that great, which makes it worse. What’s the point of pigging out if the meal tastes like hot spam and cardboard?

Got invited to see a game of tejo – a national Colombian sport of throwing rocks at explosive targets. Had four beers.

Rode from Guatape to Medellin on fantastic dirt roads. Came off my bike riding on baby head boulders downhill; foot got trapped between foot peg and rock. Only got a bruise instead of a fracture, thanks to my Gaerne boots. Feel a little silly about the fall, but very smug about riding those gnarly tracks.

In fact, I think I’ll do Lisa’s stretches, squats and push-ups now, since I’ve just transformed into this glorious, magnificent endurista – I’m basically invincible! Ha! Watch out, three-pack. You just watch out. 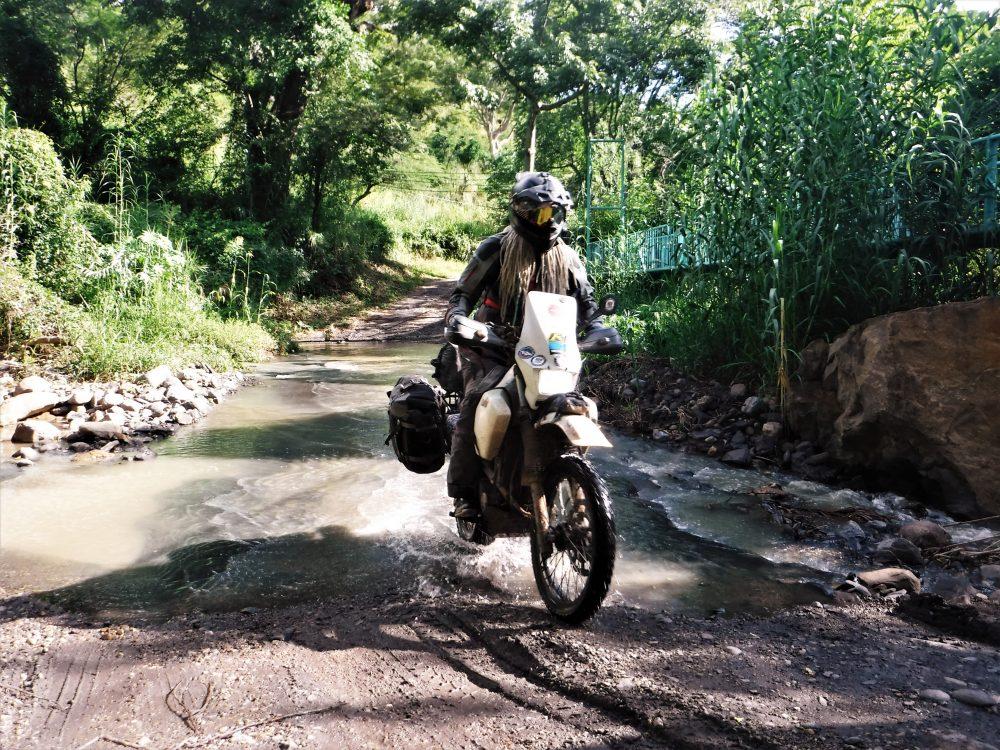 No riding today, but we had to go shop for tire tubes. Medellin is a city of a thousand hills, and I feel like we’ve climbed every.single.one.of.them. I reckon that almost counts as burpees and squats, so I’ll just do a few stretches later and call it a day.

The three-pack is still there.

If Lisa was here…

– What would be a “starter exercise pack” for someone like me – a light, 15-minute workout to get started?

Lisa: Its always best to begin with stretching!  So, with my exercise program I would suggest that you begin with the first section which is the warm up and stretching only.  Do this once every other day for 10 days.

Lisa: Exercise should not be painful!  But one of the best ways to get motivated before each workout is to spend 10 -20 seconds visualizing how you want to look.  Imagine yourself with those squarer shoulders and those toned arms!  Imagine yourself easily picking up your bike and the extra energy you’re going to feel and the extra potential that will release.

Remember, a good plan acted on today is better than a perfect plan acted on tomorrow.  In fact, physiologists say if you do something 7 times in a row then it becomes a habit.

– Exercise feels like a chore, and I’m suspicious towards chores. Is there a way to make it fun?

Lisa: Yeah, what works for Simon and I is exercising together and making each other laugh as we do it – making fun of each other whilst we’re at it.  We’re not training for the Olympics, so have fun and don’t take it too seriously! You’re always going to have good days and bad ones. We all simply feel more motivated on some days more than others. For Simon and I, exercising at the end of a long riding day is especially tough. Music is a motivator for us. So, put on your funkiest tunes and you’ll instantly feel more energized.

Keep an eye out for the next diary entry! Do you work out when you travel? Share your tips in the comments below!

PrevPreviousRiding A Motorcycle Around the World: Expectations, Reality, and Relationships
NextBeing a Digital Nomad: Where to BeginNext