Two doctors, two bikes, two charities: that’s the journey motto of Megan and Matthew Snyman, two South Africans out on a mission to explore and fundraise.

The two wandering medics set out on a 10-month journey only to find themselves still on the road two and a half years later. Having just ridden their BMW F800 GS bikes home from Ethiopia, Megan says the journey probably won’t end in Africa, either: there might be a round the world in the making!

We had a chat with Megan about what it’s like to dare to explore, how are they trying to give back, and what’s in store for them in the future. 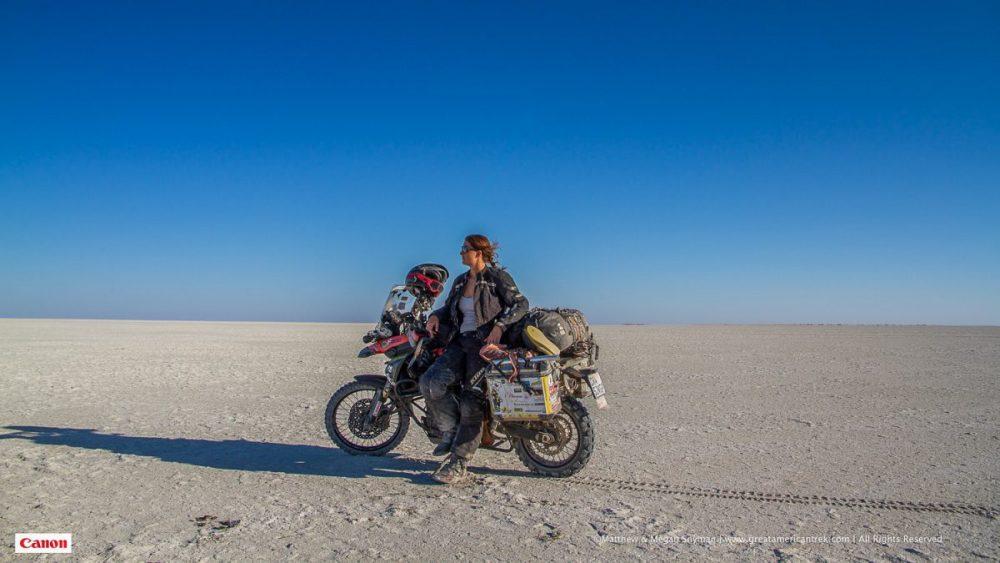 You’ve been on the road for over two years now. Looking back, what’s changed? Would you do anything differently now if you had to start all over again?

We have been on the road for 25 months now, although we originally only planned for a year. Things took a lot longer than we initially thought. If I had to do the trip over again there is not much that I would change, I would probably pack better from the start so I don’t end up throwing so much stuff away. I would do less planning for sure. Planning makes us feel more secure, but once you leave the first two stops and ride the bike, all the plans get tossed. If you like a place you stay, if you don’t, you go. I would have invested in a good riding suit from the start – where on this trip our gear failed and we had to make the investment in Peru.

Were you originally planning to go home after riding the Americas? Is this going to become a round the world journey now?

Yes we were planning to go home after a 10 month trip and gave ourselves an extra 2 months for “just in-case”. Then we planned to fly home from Anchorage in Alaska. However, after 18 months we reached the USA and unfortunately, their winter. The options were to wait till spring and then continue north, or to end the trip then. Waiting in the USA was not great for the budget, and we decided to rather spend our funds exploring our home continent. This was mostly because we really wanted to ride back into SA.

We would love to add the rest of the world to this trip and have renamed our site “Great World Trek”. However currently we need to earn some money, so it will only happen in another few years. 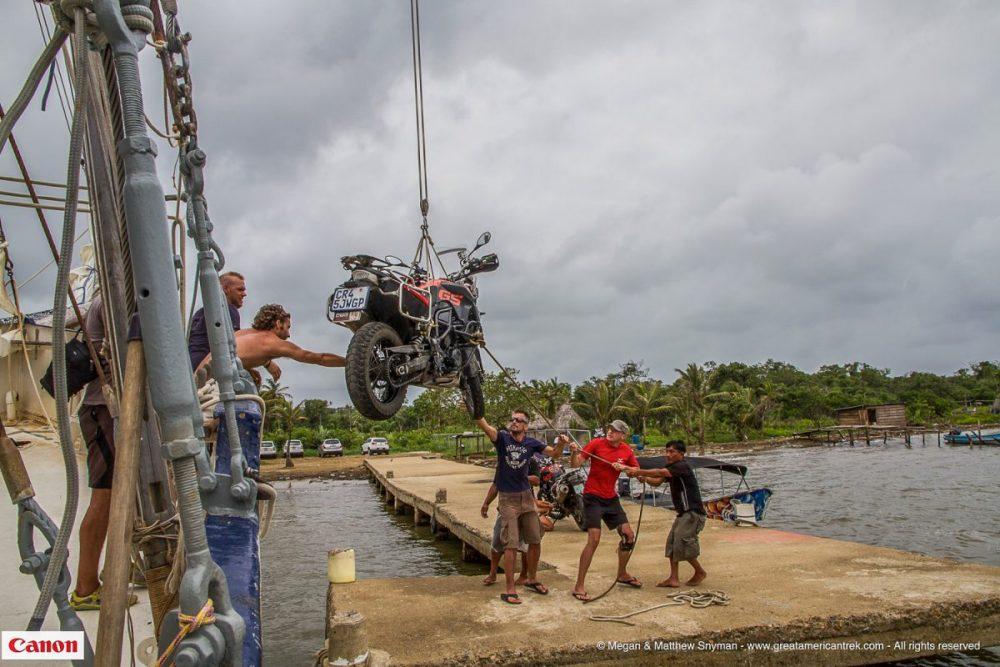 Megan, have you ever considered riding pillion?

Yes I have, and that is the only way I used to ride when Matthew took up motorcycling, I myself being quite terrified of motorbikes. However when faced with the idea of riding pillion for 12 months and two continents, I decided it may be better to ride myself. Firstly because I hate having to stop my head hitting the back of Matthew’s whenever we ride, and I also do not like always looking sideways. If you know me you will also know that I like to have some control, and will prefer to choose my own riding speed and path. Lastly, we are big people, both of us exceeding 6 ft in height, and the weight of both of us, and the luggage would have ensured numerous mechanical failures.

Are you still happy with your bike and gear choices?

I think a lighter bike would have been a better option for me, as I still cannot lift the bike up, and I am astounded to see that girls smaller than me can do it. But I have really tried! However I have no problem with the bike itself, and felt it was perfect for the off-road we did, it handled the altitude very well, and was powerful enough to take us over obstacles, rocks and on highways. I would take the F800 anywhere, any day (with the exception of deep sand). Our gear we perfected over time, and as I wrote, we had to replace our riding gear in Peru, for decent waterproof and protective Klim gear. We upgraded our kitchen to the silicone folding pots, kettle, and plates – to make it smaller. Also we added plates to our kitchen! Our synthetic sleeping bags were too big, and became enough of an issue that we replaced them for small down bags. However we did manage to travel with them for 18 months! 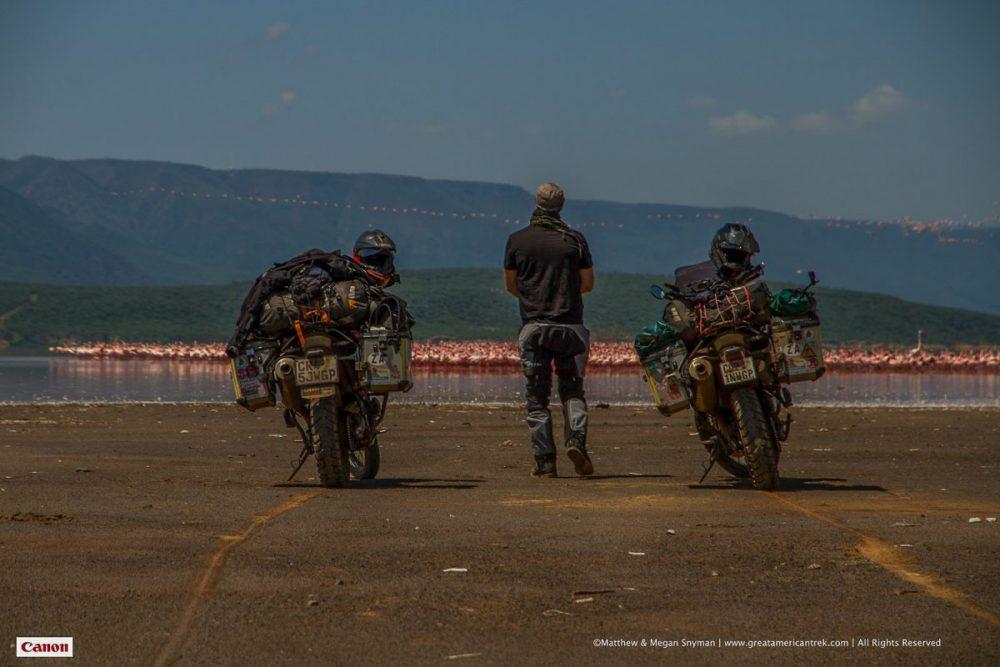 Being together 24/7 and facing all sorts of challenges on the road can affect a relationship greatly – either for the better or for the worse. What has been your experience?

We found that in the beginning we really struggled, this being due to the fact that we both worked day and night shifts before we left, and only saw each other for a few hours every day. That progressed overnight to us being inside a tent and with each other every day, all day, and initially led to a bit of friction. However if you can get through the initial stress, it adds years onto your relationship, in that we know each other better than many couples who have been married for far longer. Our relationship has come out much stronger and now the next test is getting through the re-adjustment of returning to society, where we will be spending lots of time apart, with higher stress levels and potential boredom in a daily routine. I think it is a healthy test and experience for any couple.

What has been the greatest challenge on the road so far?

This will differ depending which of us you ask! For me it has been being away from home for so long, and feeling like you are “missing out” on the lives of the people close to you, the next is probably living out of a bag every day, and having to pack and unpack each time you travel further. For Matthew, I think his greatest challenge so far was having to face the end of the trip and come home.

Tells us a little more about the two charities you’re involved with?

We got involved with MSF (Doctors Without Borders), due to the work they are doing in South Africa, fighting Tuberculosis(TB) and the related government policy on medications. I feel they are one of the few charities in the world that are consistently working to improve lives, even in the worst places. They also do a lot of work that does not gain as much international recognition, such as fighting drug patent laws and putting pressure on the local governments. It is simple getting funds to “feed the hungry children” but really not so easy to market fighting pharmaceutical companies for cheaper drugs. We aimed to raise awareness and funds to aid their TB program in South Africa, as we both have close contact with the disease on a daily basis working in RSA.

Kind Cuts for Kids is an Australian based charity, whom we encountered while working in Baragwaneth Hospital in RSA. They fly surgeons to third world countries to help the local doctors, not only by performing the specialized surgeries, but also by teaching the local surgeons how to perform procedures that they may not have been taught. We like what they do and that when we met them they were doing educational outreach in South Africa.

What’s your definition of adventure?

I would define adventure as doing anything out of the ordinary, that takes you out of your comfort zone. There needs to be an element of the unknown, as well as a mild element of danger beyond what you are used to. 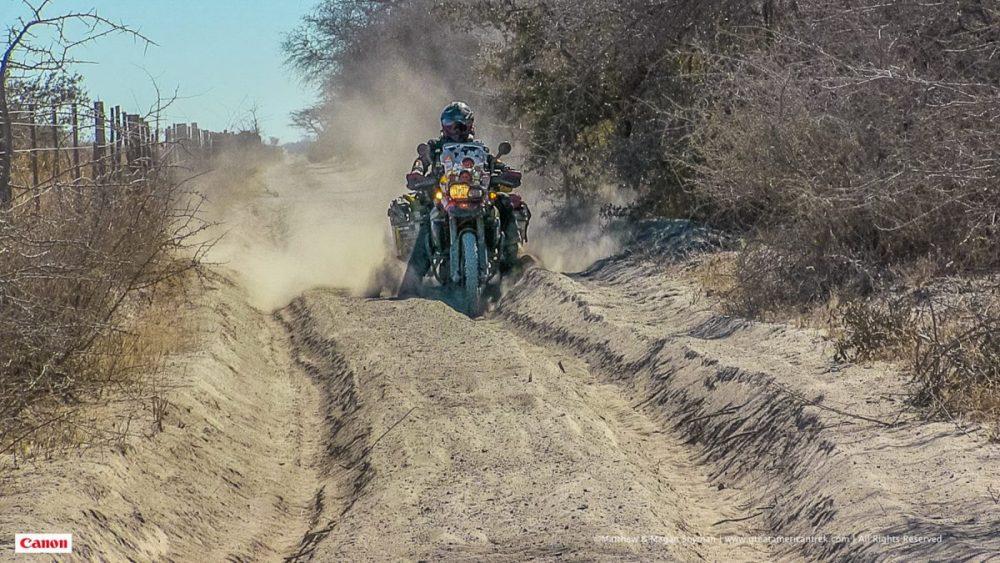 So many women I talked to have told me they set out on round-the-world, or simply very long overland journeys either right after they got their motorcycle license, or very shortly. So it seems that you don’t actually need a lot of motorcycling experience for such a trip at all?

That is true, you do not need plenty of experience to do such a trip. It helps though if you plan to ride some of the harder off-road routes, and because we planned this, I made sure I did the BMW off-road riding course before we left. However I was definitely still a novice when the trip started, and I remember letting Matthew lead the way on the opposite side of the road for the first few weeks, so I could concentrate on getting over my nerves. We only did a little dirt in the first 3 weeks, including a slow, slippery dirt ride in the dark in Tierra Del Fuego (southern Argentina), after it started raining. After a few weeks of riding in loose gravel, under phenomenally windy conditions, I found my confidence. By the end of the 25 month trip, I enjoy riding the dirt and I am definitely a more confident rider in any scenario, although sand and I are still not good friends, and I do not have the “need for speed” (ie: Matthew still spends plenty of time waiting for me).

Did you have any expectations/inhibitions/prejudice about certain countries, regions, or continents before you left, and how do you feel about them now?

Plenty! I live in one of the most dangerous cities in the world (Johannesburg), but both me and my family were terrified of us riding through Colombia. We were still under the impression that the country was run by terrorist groups. With regards to South America the concept was so foreign to me I was unsure what to expect. Honestly, I expected Argentina to be more developed than home, and found that I could not locate shops to buy the things I needed for the trip there. I was nervous for Honduras and El Salvador, but by that stage I was so relaxed on the trip, I think I only realized how dangerous they could potentially be once I was hearing stories from the locals, or after I had left. I was also very nervous of the police and fellow motorists in the USA, after all the stories and videos of motorcyclists being killed by either, for minor infractions or for no reason at all. On flying to Ethiopia, I was homesick and missing Africa, only to find the country overrun by NGO’s and unfriendly locals, who threw rocks and whatever else they could find at us. Ethiopia was not the “home” I was expecting.

At the end of the day, Colombia was safe and one of my all time favorite countries, we had no issues through Central America and only have fond memories of those countries, and I never encountered a nasty cop or civilian in the USA. With regards to Ethiopia it is unlikely I will go back there soon, and definitely not on the bike.

PrevPreviousThe Dip: Living The Dream And Feeling Low
NextPikilily, Dream of an AdventuressNext