The Frightening and The Beautiful

Artist Heather L. Johnson has covered nearly 40,000 miles across the Americas on her Yamaha XT250. But it’s not quite about the miles or the destination.

As she travels, Heather leaves scattered pieces of art in her wake, hoping they will be found and kept. 47 drawings, embroideries, and watercolors mark her journey across the United States, Mexico, Central and South America, and back. 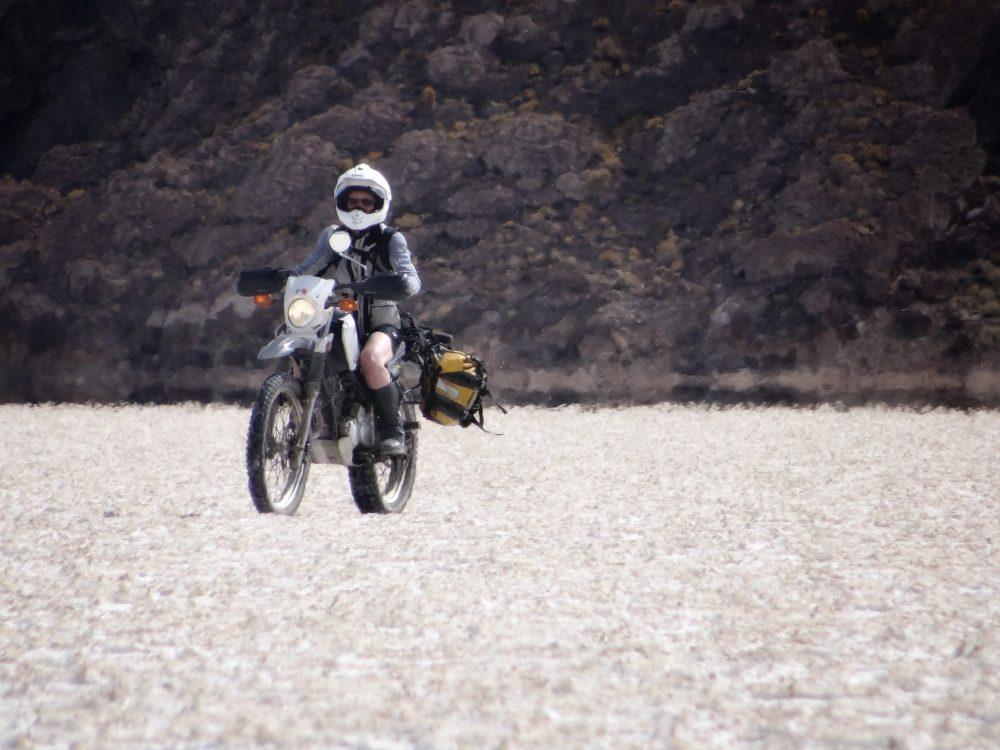 Heather, as you travel, you leave a trail of artwork for others to find and keep. What’s your mission?

I make small hand-embroidered artwork that I either place in the landscape or give to people when I’m on the road. I see this as a metaphorical “way in” to cultures I am passing through. An outsider who will never know what it’s like to belong to a place I am passing through, the experiences I have in these spaces are temporary glimpses based on impressions. I take photographs and record images through written descriptions of what I see. Leaving an artwork in a place, then, becomes a sort of gesture, a way of giving back, a bit like an exchange, as I am effectively leaving a piece of myself there.

The embroideries depict motorcycle parts, layered with bits of text describing experiences I’ve had while on the road. We all know that when riding, our motorcycles become a part of our bodies, as every corporeal movement affects that of the bike. We slice through the air, one with the machine, exposed to all elements. So the motorcycle parts therefore are a reference to body parts. They are hard and mechanical, but they become intimate and personal when rendered this way. I like contradictions.

It’s also worth mentioning that I make most of the embroideries on the road. I work on them in public squares and other places where other people are present. Quite often, this invites interactions. For example, while I was working on a piece in the Zocalo of Oaxaca (Mexico), a woman approached me enthusiastically, wanting to know what I was doing. She was fascinated initially with the level of detail and precision; when she saw that I was sewing a motorcycle part, she went and got her husband. Soon I had her entire family standing around me, asking questions. 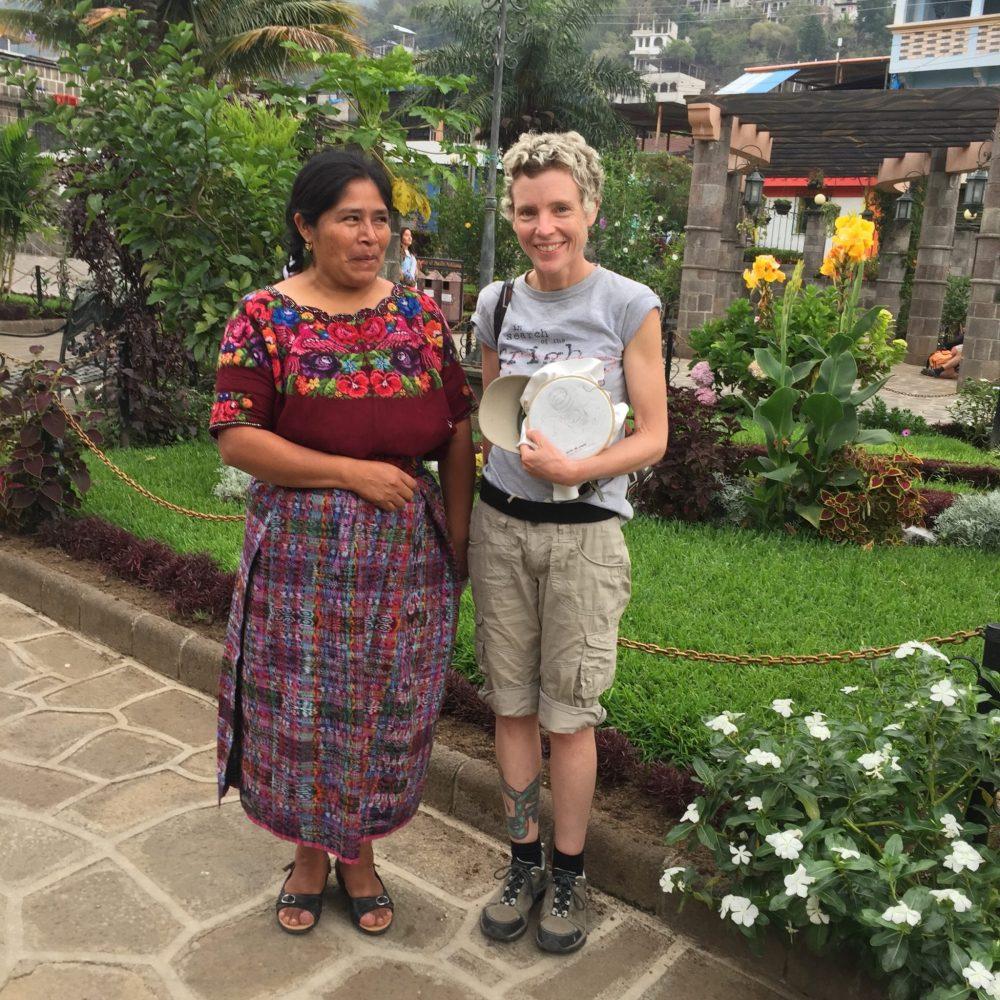 Is art a way of giving back while traveling the world?

I place my embroidered pieces out in the world in the spirit of exchange. I see it as a metaphorical trade – I take photographs, collect stories and interact with people – so it’s only right that I should leave a part of myself behind in that process. But in all honesty that specific act is every bit, if not more, for my benefit than for any finders or recipients of my “gifts”. I have no way of knowing the thoughts of those who end up with them; the best I can hope for is that they provide a welcome (or at least an interesting!) interruption to the rigors of daily life. 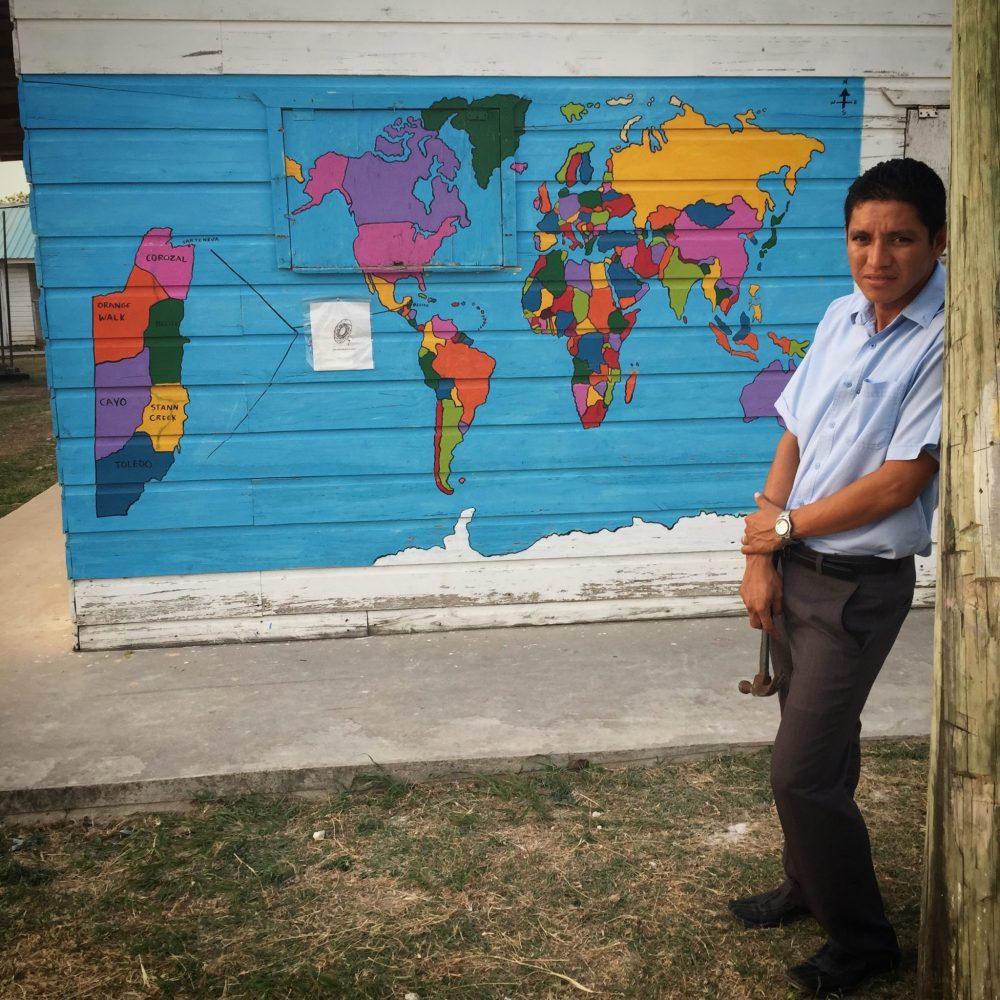 The real exchange comes from how and what I communicate about my travels once a particular journey is complete. Does a well-executed and placed body of artwork have the ability to increase awareness and open minds? Absolutely.

What discoveries have you made regarding your art when you started riding a bike?

When I started riding motorcycles at age 37, my relationship to space – the land, the sky and stars – changed completely. I felt like I belonged to the landscape in a way I’d never before experienced.

The vantage point one has from inside a car or truck is a bit like watching a film: the windshield acts like a movie screen, depicting the world moving quickly beyond reach at 100 km per hour at a safe and entertaining distance. You’re inside a metal box, and any movement the body makes inside that box is separate from the time-space outside that is perceptibly out of reach. But when riding a motorcycle, one becomes a physical part of both landscape and machine. Every bodily movement affects the movement of the cycle, making the cycle an extension of one’s own body: human and machine slice through space as one unit. 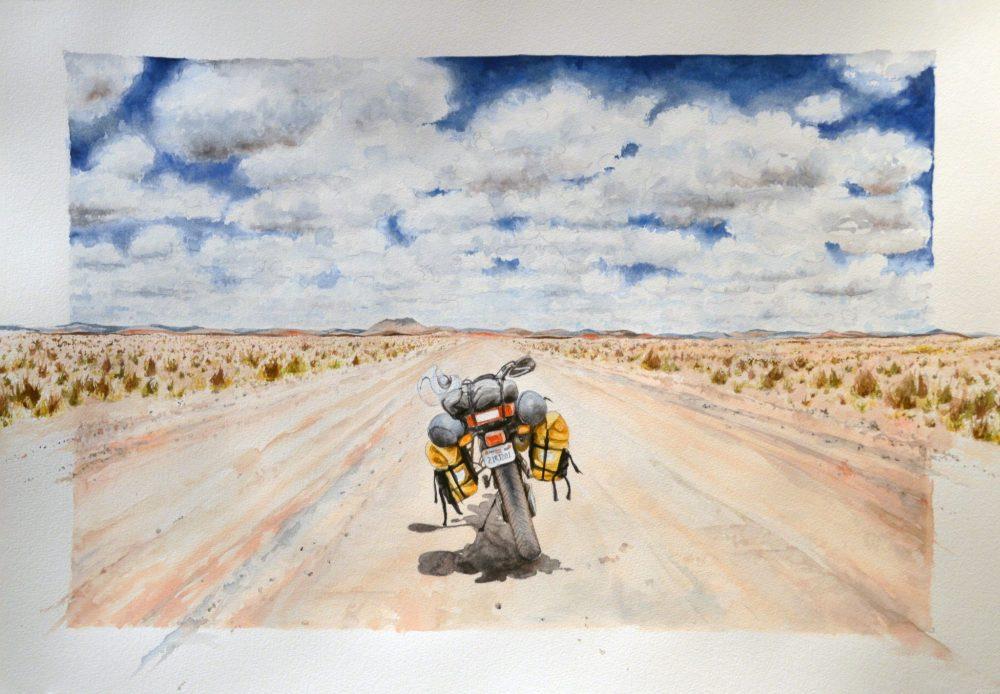 I started thinking of motorcycle parts as body parts, becoming fascinated with parallels between the workings of the human body and those of a combustion engine. The circulation of blood and oxygen being similar in many respects to the blending of air and gasoline that happens in a carburetor, for instance. This led me to think about circulation, repetition and revolutions present everywhere in the universe – in wind patterns, in the orbits of stars and planetary systems, and in many everyday actions, such as stitching an embroidery.

Tell us a bit more about your trip in South America. How did that journey change you as a person and as an artist?

The trip revealed where my own strengths lie in terms of facing and solving problems. I learned that I am capable of a tenacity and persistence I’d never seen in myself before. But most importantly, I learned to trust people, which I believe has made me more open-minded in general. Many situations occurred that I may not have survived, or certainly wouldn’t have gotten through easily, without the help of total strangers. 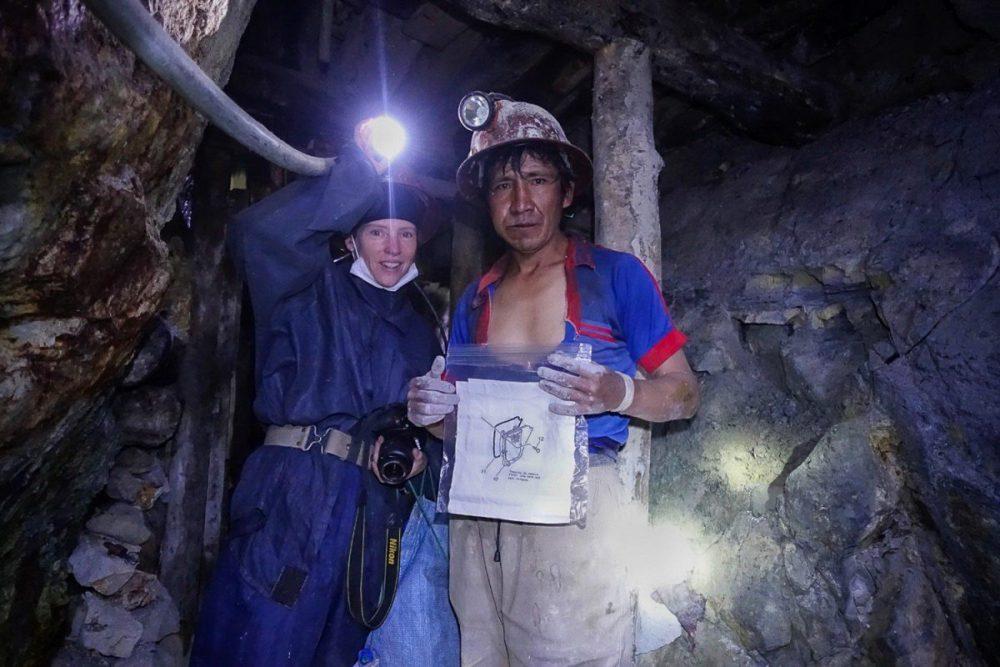 My time in Central and South America has taught me to look more deeply than ever before into my surroundings, changing my perception of what is “ordinary” and “exotic”; relationships and parallels between what feels familiar and foreign are now more apparent to me. After returning to the United States, I started viewing familiar territory from new angles, seeing things I hadn’t seen before. I made a point of walking along boulevards rarely traveled by pedestrians, wanting to experience an urban landscape designed primarily for cars (in this case Houston, TX) in order to observe details generally missed by vehicular travelers. Ordinary bits of trash, cracked windows, and vacant spaces became exotic… While evidence of poverty – dilapidated housing and creative do-it-yourself housing solutions, for example – are now de-mystified and ordinary.

I am more aware than ever before of my own privilege. Not only as I travel through developing nations, but as I live in and move through my own westernized country. One of the most vital lessons I’ve learned from my travels is to never forget this or take it for granted.

A lot of solo riders complain of ‘chronic loneliness’ on the road. Have you experienced it? How did you handle it?

Definitely. We are “other”: perpetual strangers, outsiders passing through cultures we can never truly be a part of in the same way we experience our own home territories. Even though I learned enough Spanish to be able to acquire what I needed to get by, I was rarely, if ever, truly understood. 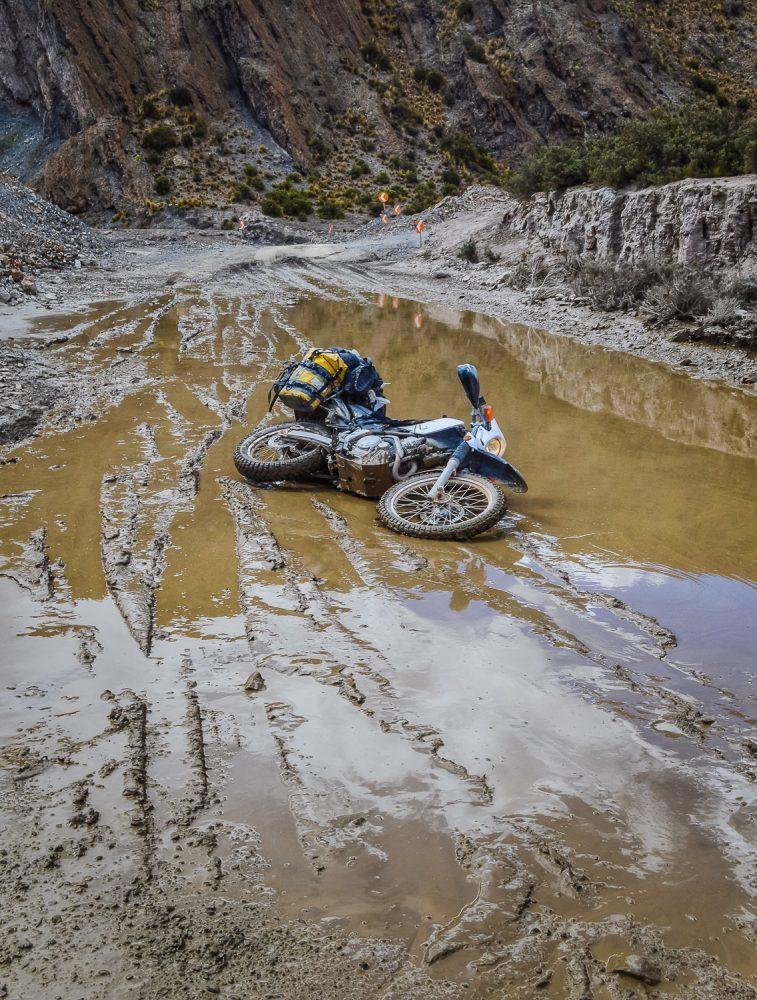 But whenever the negative emotions got too great to bear, something would happen to keep my faith intact. I’d see something or meet someone who would remind me of the point of all of it. Some man in a roadside tienda might introduce me to his family, exposing me to new personalities and ideas; or I would witness something on the horizon, terrifying or beautiful, that would suddenly snap everything into perspective and make me forget about the pain. This is how I kept going. With perseverance and doors to open, one after another.

For some, a solo motorcycle journey is a luxury. For others, an ambition. And for the rest, it becomes a natural way of life. What about you?

It’s a necessity. A means of mental and emotional survival – something that gives me purpose. I see these journeys as pathways into new ways of looking at the world, to be channeled into new forms of art and writing. Since motorcycle travel is now a part of my work, I am perpetually motivated to plan and find the means for new journeys through which to explore different ideas.