Riding Siberia: Sandra’s Quest for the Road of Bones

Sandra Binkle and her husband Thomas have been adventuring on two wheels for nearly two decades now. Last year, the Swiss couple decided to take on another challenge and ride the notorious BAM road and the Road of Bones in Russia.

The two infamous Siberian dirt roads stretch for 2700 miles across desolate taiga, with little to no traffic and scarce supply opportunities in between. For Sandra and Thomas, this was an unplanned adventure – but one that they’d gladly repeat. 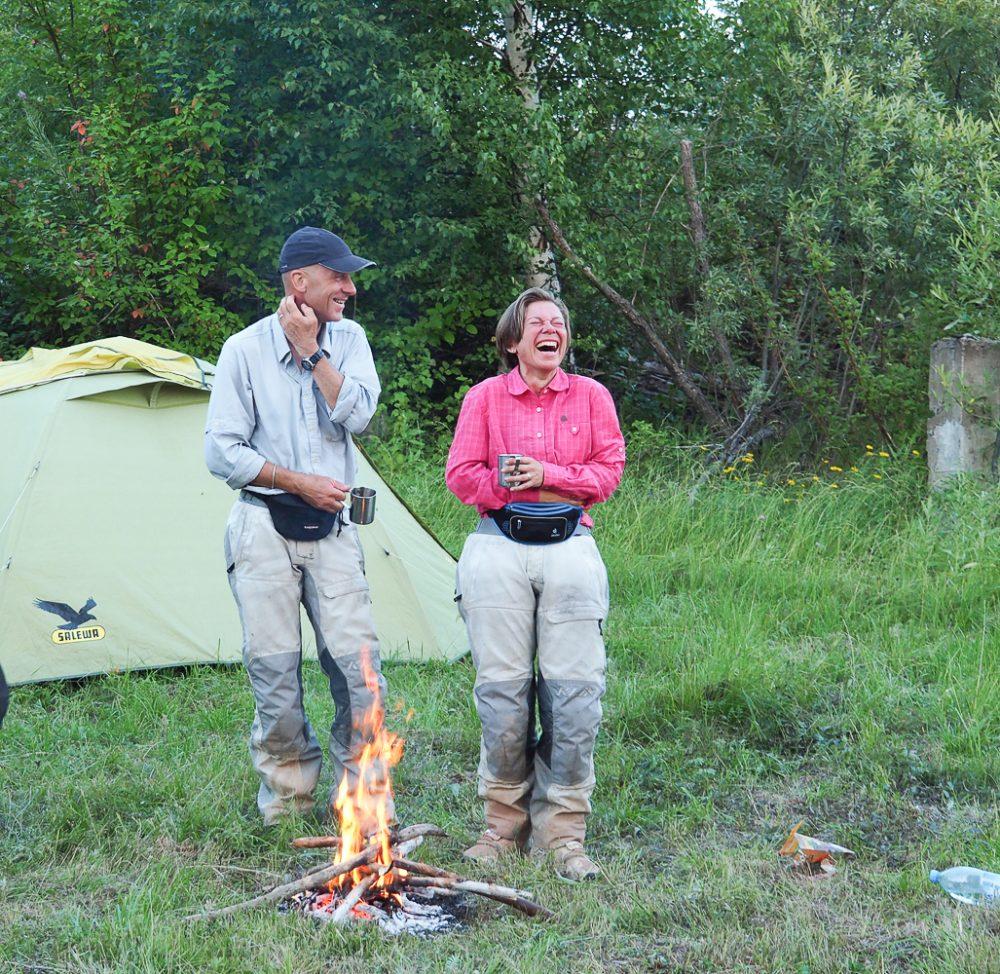 “We didn’t really plan to do the BAM road as its famously bad: it’s a railway service track that isn’t maintained, so the conditions worsen every year. But after meeting other travelers on our way in Mongolia and hearing that it was in fact doable, we decided to give it a go”, – explains Sandra.

“We wouldn’t have done it by ourselves. We didn’t know what to expect and we thought it simply was too risky to go on our own. Luckily, we met a group of riders in Ulaanbaatar who were planning to do the BAM road, and they were happy to team up. So we ended up riding in a group: six bikes and seven riders, an Australian-Argentinean duo riding two-up on GS1200”. 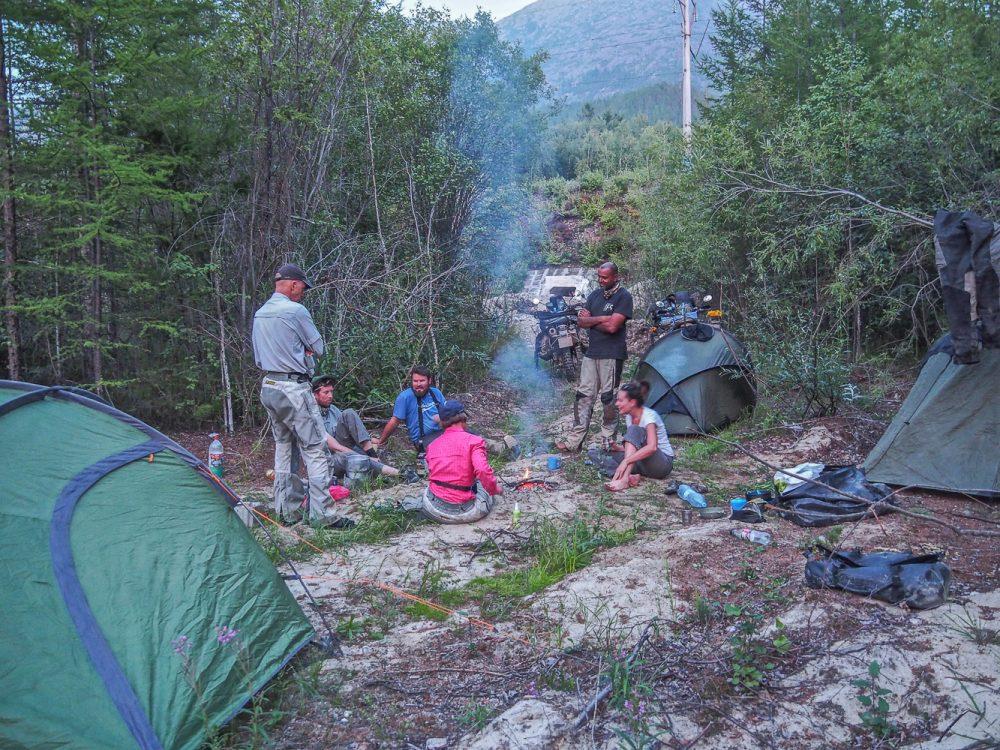 The most feared part of the BAM, Sandra says, was the Vitim bridge – an infamous dilapidated wooden bridge that’s barely held together by loose wooden planks. 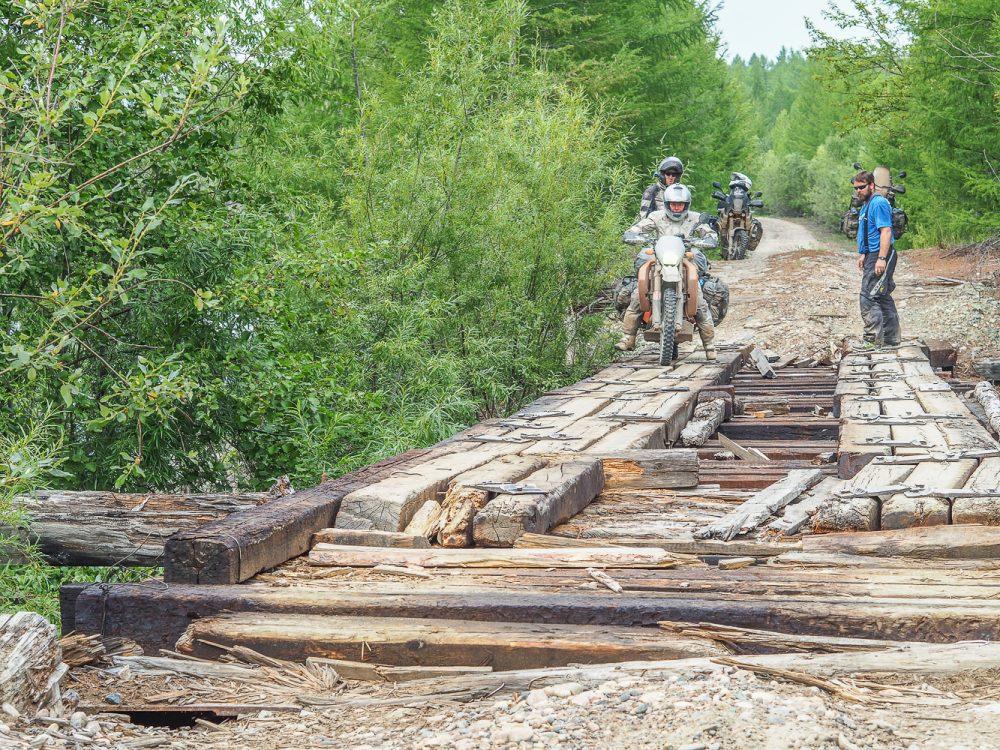 According to Sandra, the first few days on the BAM weren’t too difficult: the weather was great, and although there were some river crossings, they weren’t too dramatic. On day two, they reached the Vitim but Sandra says it wasn’t as big of a deal as it’s made out to be. 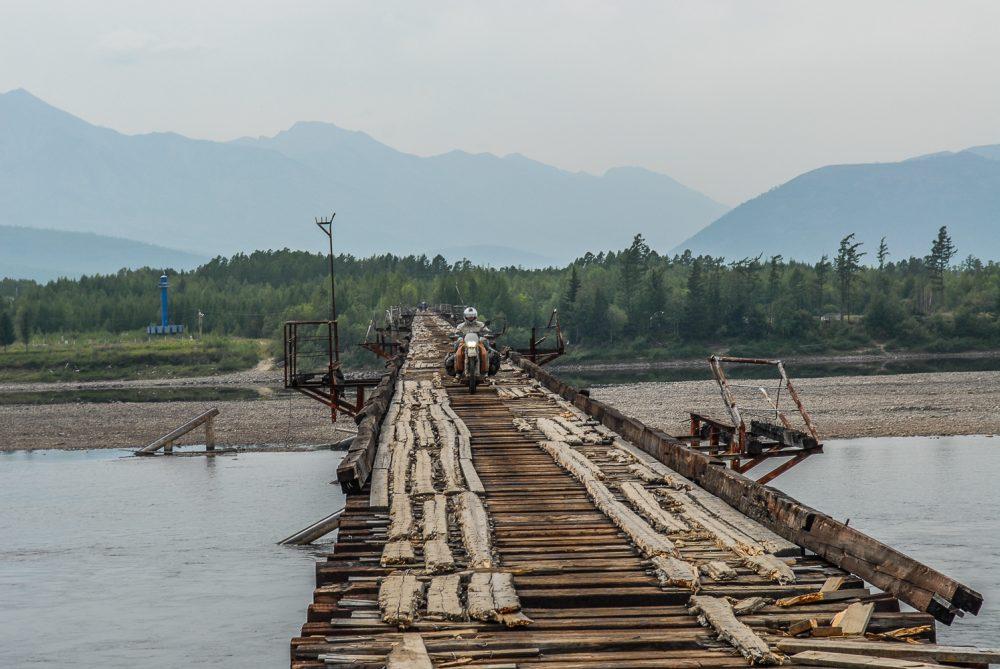 “Sure, it’s scary to ride across loose wooden planks with no railings to stop your fall, but it wasn’t as bad as I thought. Yet by day four, we all started to feel the physical toll – pushing and pulling the bikes across rivers, picking bikes up, riding long distances each day…it was exhausting. We kept a brisk pace because we knew the rain was coming, and when wet, the BAM turns into a muddy nightmare. On day four, I confess, I reached a breaking point and just wanted to go home. I’m not a giving up type, but that day, life on the road just got unbearable at one point. We only did 85 miles which means there were lots of rivers crossings and broken bridges; I reached a point where I’d had enough. But after a shower and a night indoors, I was ready to go again”, – remembers Sandra. 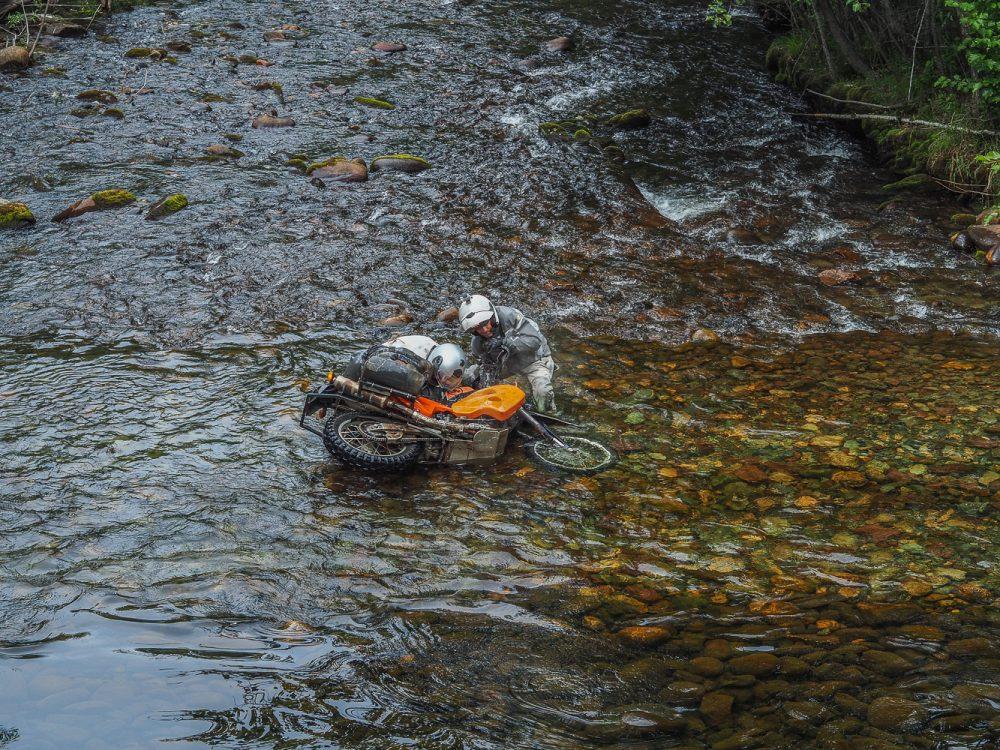 She says she was really happy to have another woman on the team: the Argentinean pillion, Gaby, helped to balance things out a little.

“Even though she wasn’t riding herself, it was fun to chat and hang out with her. I think we brought a bit of a balance to the whole team, so the adventure wasn’t just about dudes and muscle power. I think the whole team clicked really well, and I didn’t feel like I was the weakest link or anything – I was simply a part of the team, just like everyone else”. 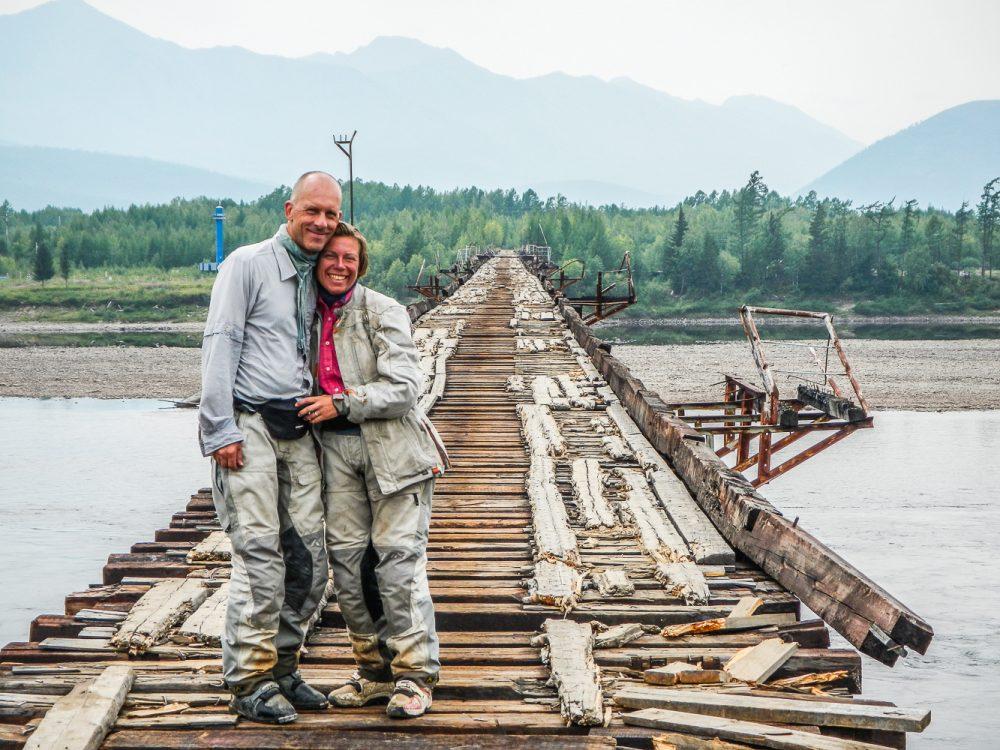 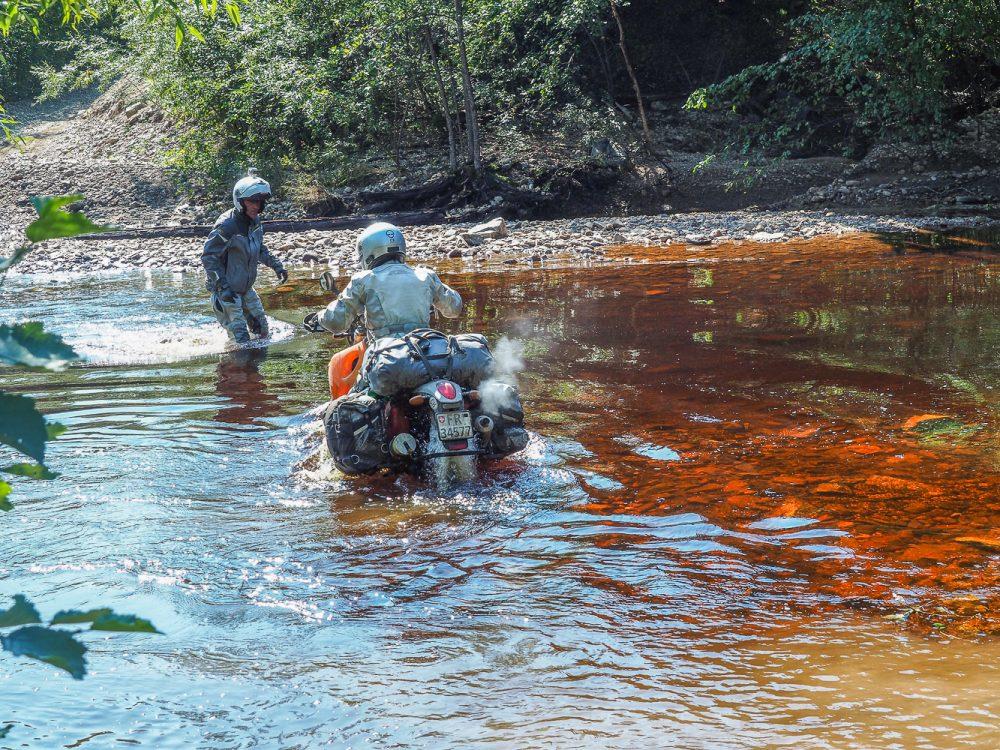 Road of Bones to Magadan

After resting up in Tynda for one day, Sandra and Thomas set out for the Road of Bones. In Yakutsk, they split from the rest of the group as the road got better and the bigger bike owners were able to ride faster.

“The Road of Bones was wet and slippery. Long days, remote country, desolate taiga – you don’t really see much, the towns you come across are pretty depressing, the hotels are expensive – it’s not exactly a pleasant ride, but it’s definitely an adventure. It’s much easier than the BAM road because it’s maintained and there’s more traffic on it. If the weather is good, it really isn’t much of a challenge in terms of the road conditions. If the weather turns bad, though, it can get nasty. It’s kind of like riding up to Deadhorse, Alaska – just to cross it off the bucket list!”, – says Sandra.

“Would I do it again? Absolutely, especially if I could take it slower. The local people are lovely – the railway workers, the town folk, everyone’s so friendly and so happy to see you. They look at you like you’re crazy, but the hospitality is amazing. I think the fact that I was a woman was even more surprising to them – I can’t even count the times I was hugged or asked for selfies together!”. 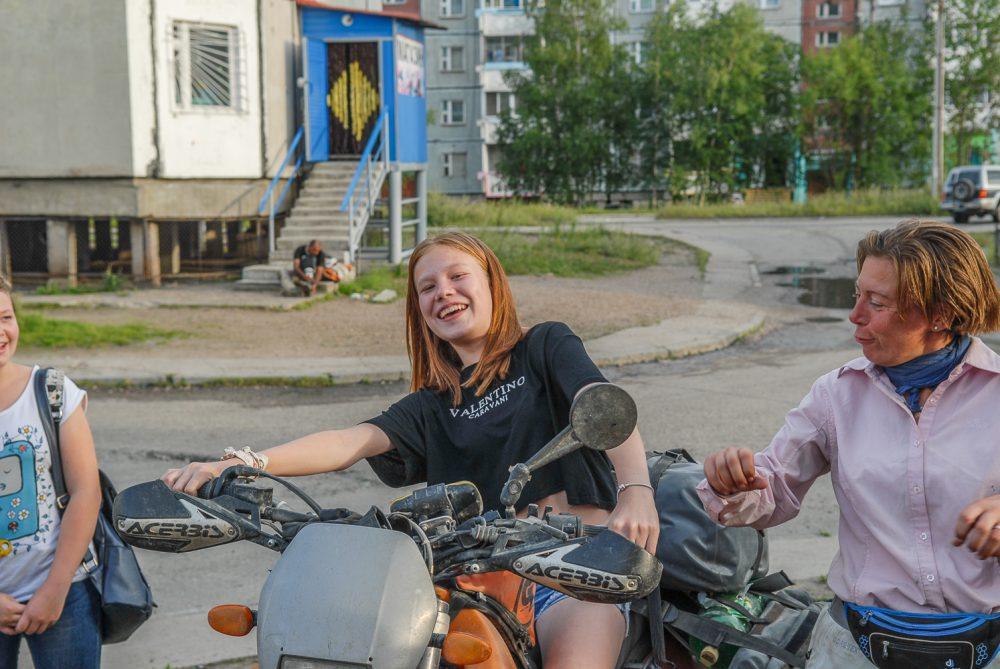 Currently, Sandra and Thomas are riding Mexico and making their way south. What’s next for them? “Once we’ve done  South America, we have no plans at all – but it doesn’t mean we’re going home. We like to improvise. Will we go on to Africa or Australia? Maybe!”

PrevPreviousThere’s Something about Vanessa: The Girl on a Bike
NextWomen ADV Riders New Year Moto ResolutionsNext