There’s Something about Vanessa: The Girl on a Bike

“My goal is to make the most of life, because in a moment, it can change.” Vanessa, The Girl On a Bike

Vanessa speaks the truth of her experience when she states this fact. Throughout her life, she was active, riding a bicycle to work, kite surfing on the weekend, mountain biking whenever she could until one fateful evening in March 2014 when everything changed.  In one thoughtless moment, a car ran a red light. One moment Vanessa was riding her bicycle through the intersection, the next she was on the ground. 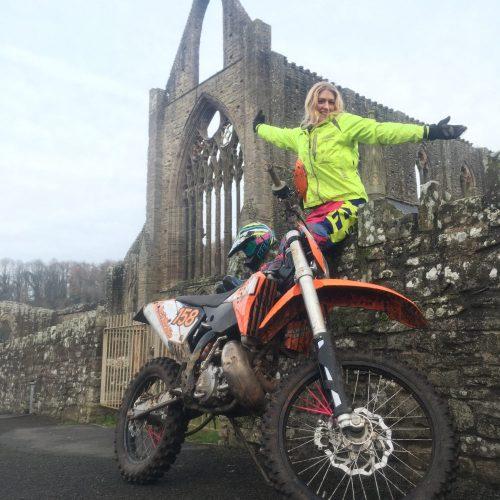 Her injuries were not life threatening, at least from a medical perspective. But they have been slow to heal and without a doubt, life changing.  Shoulder surgeries, hip surgeries, every therapy imaginable.  She literally last week faced another painful surgery, number 5, yet if you talked to her, you wouldn’t know it. There’s something about Vanessa with her positive outlook and hopefulness. 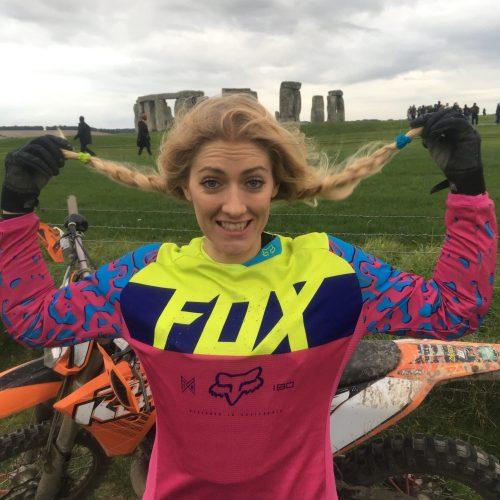 Vanessa grew up with horses.  With horses, when you fall off, you just get back on. She’s been frustrated by the fact that she physically hasn’t been able to just hop back onto a bicycle, but during her recovery, she did discover she could ride a motorcycle. “I realized I can use that to commute to avoid traffic.”  Vanessa started riding as much as she could. She loved the freedom, the acceleration, the wind in her hair. She admits that at times, she feels vulnerable on a motorcycle. “Seeing cars coming from my right still freaks me out, three and a half years later.” But that does not stop her from riding, whenever her medical procedures allow.

When asked about how she got into riding dirt, Vanessa laughs. “No one told me that motorbikes breed!” One night, Vanessa had spare time. She was poking around on the internet, probably watching some YouTube when she said aloud “We need a dirtbike!”

Her husband looked up from his book “ok.” They bought a WR250 to share, to see if this was something they’d even like. She was actually recovering from a surgery at that time, so she wasn’t even able to find out. She spent her time watching over it, cleaning it and daydreaming about riding dirt.  When she finally could ride, two things quickly became obvious. She loved riding off road, and the WR was not the right bike for her. She upgraded to a two-stroke KTM and spent as much time “green laning” as she could. “This was the new thing!” 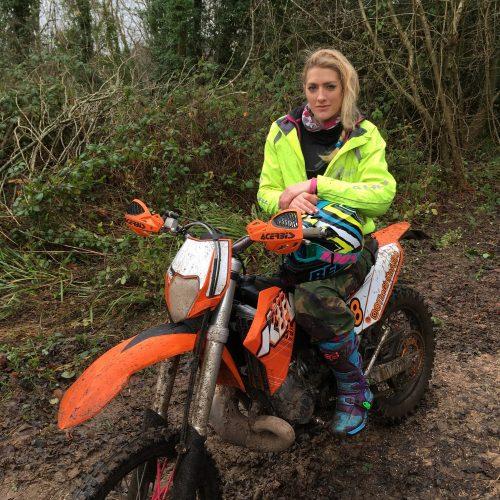 On Self Confidence and  Being a Gal

Adventure truly is attitude. All of her life, Vanessa has enjoyed male dominated activities. “What has given me the self confidence to do what I do?” she reflected. “My parents never said ‘you can’t do that’. I grew up with an older brother and two older male cousins.  I had to keep up and defend myself and stand my ground.”

These days, Vanessa finds it satisfying to be in front of a “group of blokes, and able to roll up on a bike as big as theirs or talk engines with them.”  She has run into her fair share of skepticism.  At shops, sometimes she gets the question “Oh, which bike would you have if you could have a bike?”  She realizes that she doesn’t look like a typical motorbiker with the blond hair and long eyelashes. So, she’s just honest, and shows up as a rider, a snowboarder, a surfer. Her husband chimes in “you’re quite credible in the knowledge you have, that helps you stand your ground.” 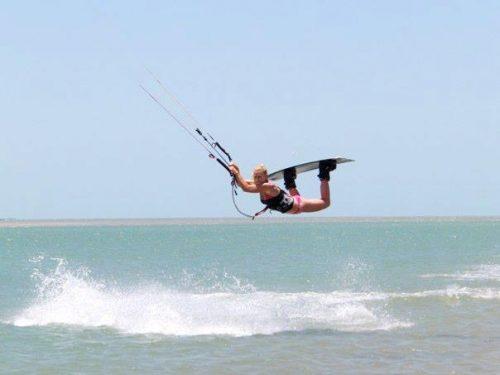 “I’m not a girl rider. I’m just a rider.”  The enduro scene seems to have created its own challenge around gender. “At a practice racing event, I am one of 2 or 3 women out of 300 bikes. I am a novice, and honestly, this is the most vile group of guys I have run into. They see a girl, and the most important thing is that they get in front of you.” She just carries on, doing her best, knowing that she is going to progress and someday, they won’t be getting around her.

She also noted that “Sometimes girls don’t help themselves.” She encourages women to ask questions and to do research so they can talk intelligently about the sport. “Just trying to be pretty and sexy, you may generate the wrong sort of attention. Go into it like a real biker.” 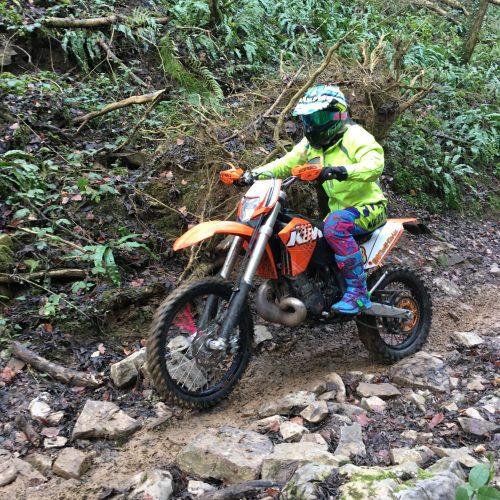 On Learning to Ride

Vanessa obviously knows her way around a motorcycle. We wondered if she grew up around them. Vanessa told us that her dad had a motorbike when she was a kid.  She knows it’s true because there are photos, but she doesn’t remember it at all! Her dad was into cars “so I was always a petrolhead. I learned how to drive at 13, and I bought my first car when I was 16. I woke up the day of my 17th birthday to tremendous fog, but that didn’t stop me from driving my car.  My parents hopped in with me, and I drove up the highway. Why wait until the morning!”

She later got her first motorcycle when she was working in the Bahamas. “I ordered a bike from China, and it came in a box in pieces. I traded a box of rum to someone to build my motorbike. It didn’t bother me that I didn’t know how to ride, I just figured other people can ride, I can do it.” 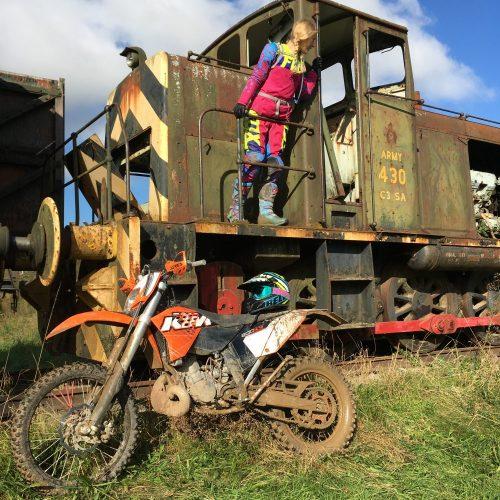 She and her husband rode Harley-Davidson’s on their honeymoon.  When her husband returned from active duty, she planned an anniversary ride for them, and she realized “We need Harley’s.”

So, what is The Girl On a Bike?

The Girl on a Bike is Vanessa’s  Instagram account. Vanessa shares that “this has been a huge emotional roller coaster and I’ve had to learn to deal with pain.”  In the process, she has learned mindfulness and how to choose to be positive. When she was at home recovering from major hip surgery in 2016 and wanting to connect with people, “The Girl on a Bike” was born.  “It’s pretty much just following my life. I just post shots of me doing my life, getting out and trying to make the most of things. I don’t do anything special for it.” 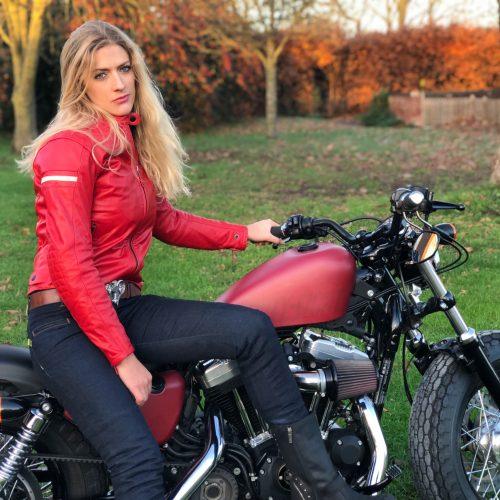 Through this, she has found that there are other people struggling, and her own struggle, attitude, and sharing have inspired them.  “I love helping inspire other people to do more with their lives.” She has had the opportunity to work with brands that she connects with. “If it’s on my site, it’s because I use it.”

Vanessa is also starting a “The Girl on a Bike” YouTube channel.  It is going to focus on her working on her bikes.  “There’s so much out there that the normal average person can do on their motorcycle.” She wants people to see that you don’t have to be special to work on a bike, and “there’s a lot of satisfaction in doing what you can at home.” She’s an account director in business to business marketing – it’s fast paced, challenging and pays for her fun, but has nothing to do with motorcycles. “If I can work on my bike, anyone can!”

There’s something about Vanessa.  We asked her about her spiritual path. “I’m spiritual in a way that I don’t even know what it is. There is so much more to life than we actually know. I don’t have the vocabulary or understanding to describe it.” She told us that her mom works as a spiritual healer, and is an excellent example of how much more there is to life than meets the eye.

“Our mind has so much power; there is so much that is unconscious, but we can consciously change so much. When we go out in a bad mood, we are actually making a choice to be in a bad mood. Kick that out and put a smile on your face. You are going to get back what you put out.”   This has been true with pain. “I try to focus on the fact that I’m not in pain.” She is also an incredibly grateful person, who notices the smallest joys and beauties. 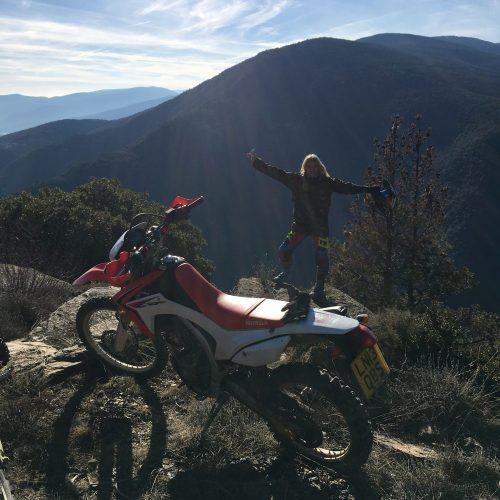 The moment Vanessa is cleared to ride from her next surgery, don’t be surprised if you see her on a plane to Morocco to ride off road. She’s launching a website to continue to share her story, to help her stay motivated in her recovery, and to continue to inspire and encourage others who are struggling. 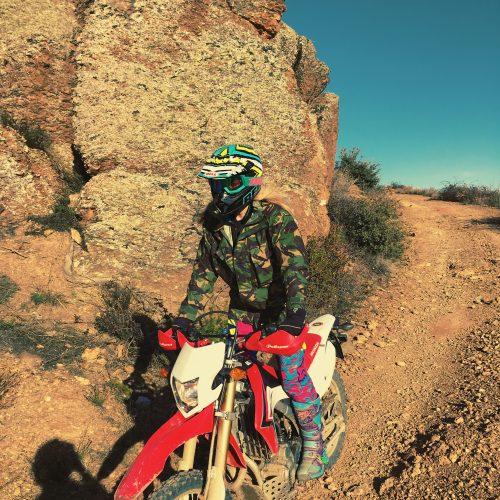 Vanessa leaves us with one important thought

“More girls should ride bikes!” Vanessa, we agree.  And, we think you exemplify #adventureisattitude ! 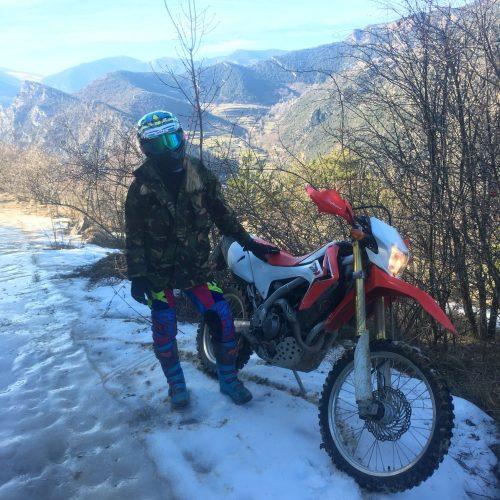 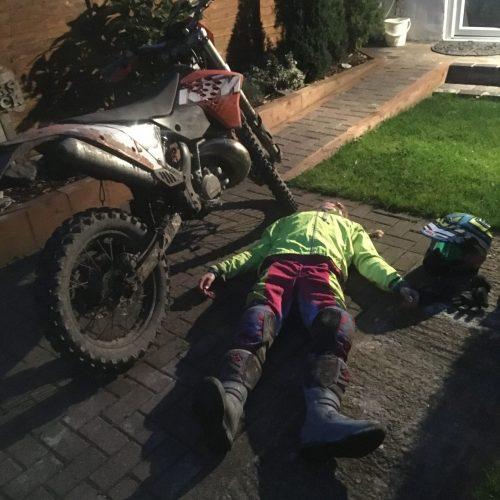 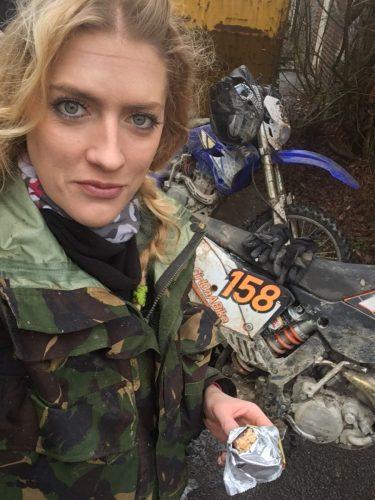 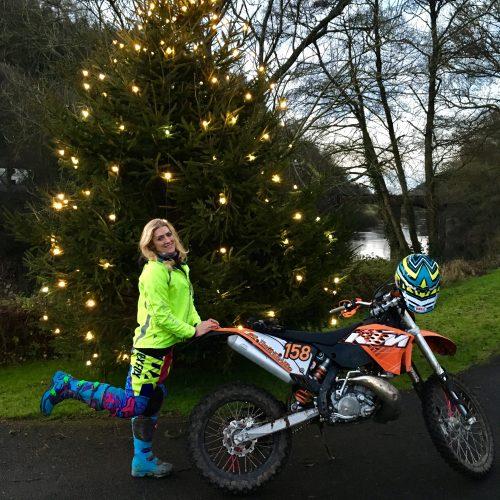 Want to know more about Vanessa?  Check out THE GIRL ON A BIKE website.

If you enjoyed this article, check out another awe-inspiring story HERE!

PrevPreviousHelping the Community: How Not To Burn Out
NextRiding Siberia: Sandra’s Quest for the Road of BonesNext