So here’s the deal: I’ve never had any motorcycle riding training. Ever.

I learned to ride a few years back in Peru, where my training consisted of a friendly biker teaching me the basic clutch/gear/go/stop combo.

Don’t get me wrong, it worked great – I’ve completed an eighteen-month journey across and around South America since, ridden back home in Europe, and finally hauled ass and bike to North America. Trouble was, Paul, my partner in crime (and off the road) had suggested we do the Americas on as much dirt as possible – and I agreed. Why? Well, why not? 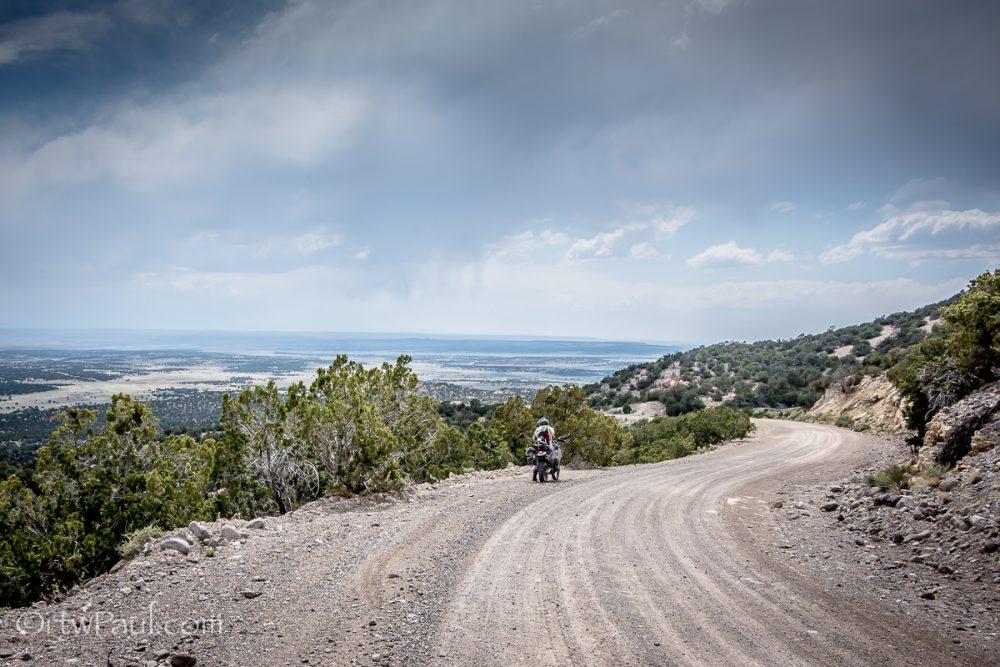 But while my ‘why not’ outlook usually works surprisingly well, I was a tad worried about our off-road adventure. I had dealt with gravel, sand, and mud in Bolivia, Argentina, and Chile, but that was a while back. Plus, I had a small 150cc bike and was alone. Now, I was facing a Suzuki DR650, a very experienced rider to keep up with, and 25,000 endless miles of continuous dirt tracks.

Enter Dusty Wessels, co-founder of West 38 Moto and co-contributor of the Women ADV Riders Riding Academy page. ‘Why don’t you and Paul come over to Santa Fe – we’ll be doing our training weekend there, plus you can join us on an off-road tour to Overland Expo in Flagstaff afterwards’. 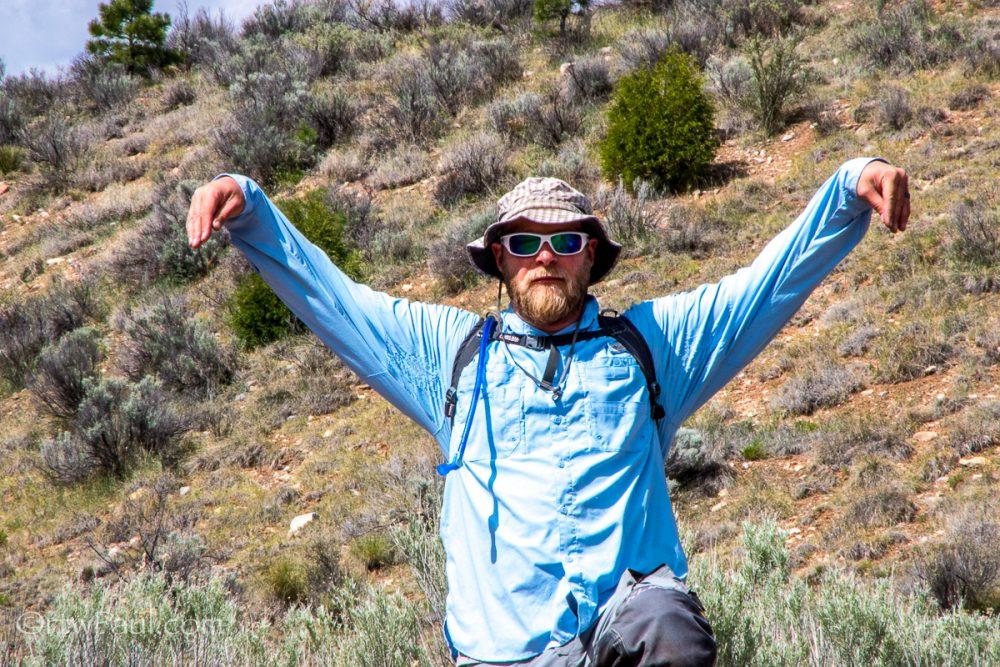 Why not, of course! We accepted the offer immediately, although at the same time, I feared the thought. Off-road training sounds like something serious. Something that requires skill, dedication, willpower and technique, and I possess none of these. Besides, what if it’s a testosterone-fueled dude-bro ‘alpha base camp’ type of an event, where coaches behave like army lieutenants and people yell at you and it all ends in a show-off contest of power slides and such like? At the very least, surely everyone will be so much more experienced than me, I’ll drop my bike a million times and the tour will be the absolute worst because I’ll be the slowest, most inept adventure bunny out there, for sure!

But as we rolled into the driveway of a bright, sunny house in Santa Fe booked for the West 38 Moto training weekend, my reservations about militant coaches and pushy dude-bros was immediately forgotten. If Dusty Wessels could be mistaken for anyone, it would be a cheery beach bum rather than a stern army lieutenant. Paul Ernsdorff, co-owner of West 38 Moto, also seemed more like a lighthearted philosopher than an order-barking menace, and Louise Powers, another off-road coach, was all smiles and welcomes. In fact, the only intimidating thing about West 38 Moto was the amount of beer in the fridge.

Day One: We’ll Come up with Stuff, and It’ll Be Awesome

After a chilled out evening of introductions and said beer, it was time to hit the training grounds the following day. The location – an abandoned gold mine – couldn’t have been better, and the variety of bikes at the meeting point was a sight to behold: everything from the big shiny BMW GS’s to elegant Triumph Tigers to the sturdy working ponies – a Kawasaki KLR, a few Suzuki DRZ 400’s and our DR650’s. Diversity and acceptance of all bikes regardless of brand or size? Check.

Following a short introduction and the basics of picking a loaded GSA up, we headed off on a graded gravel road, and the real deal was about to start. ‘This is it’, – I thought to myself. ‘This is where something very technical and very complicated is about to ensue… I won’t understand the half of it, drop my bike, and make a mess’. I was prepared for some complex theory followed by highly technical riding tricks, delivered in expert terms and demonstrated with Teutonic precision and cool.

Instead, we just crawled our bikes back and forth a little bit, getting the feel for the clutch and exchanging friendly banter.

As the exercise rolled on, still nothing horribly advanced happened. Louise and Dusty were leading the two groups of trainees, rocking the bikes forward and backward, making jokes, cracking people up and cheering everyone on. Next up, we switched coaches and did another exercise – stand up to speed up, squat down to slow down. Still nothing intimidating. Then, it was time to apply the front brake, then the rear, then both. All the drills and exercises continued in such smooth and seemingly effortless transitions that I hadn’t even noticed we were already doing rear wheel skids – something that used to cause me sheer terror when on the road!

Whenever in doubt, there was always a coach nearby to advise, cheer you on, or challenge you to push your limits just a little bit more. Kim Prichard, an off-road coach in training, gave excellent advice using her road racing experience, especially about managing turns at speed – something that used to be my most dreaded adversary.

After a lunch break, the drills and exercises continued, demonstrated and explained by Dusty and then reinforced by practice. Same smooth and effortless feeling, smiles and jokes all around, and before we knew it, the day was over. Even the foreboding figures of eight were finally conquered, and it was time to pack it in.

Exhausted, I fell asleep the second my head hit the pillow. Okay, today was tiring but easy and fun – surely tomorrow is when the really hard stuff is going to happen…

Day Two: Bring It On, Sand

Despite my lingering fears, day two started off just as lightly: after a short ride to the gold mine, we were up on our bikes repeating and reinforcing some of yesterday’s exercises and adding new ones.  Uphill starts, downhill stops, steep turns, the damned figure of eights, and finally, fine sand. 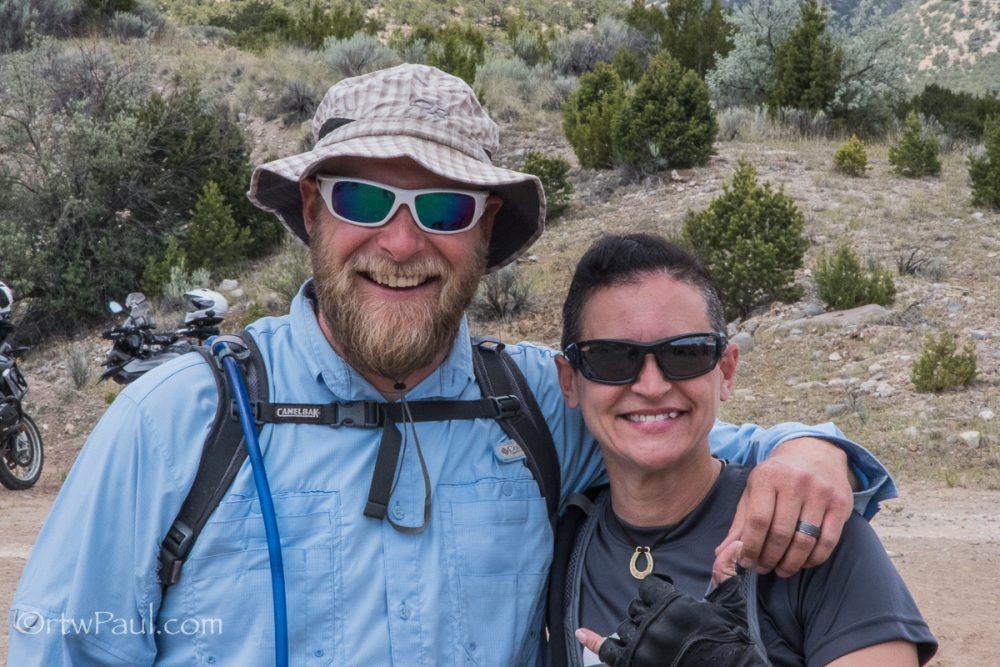 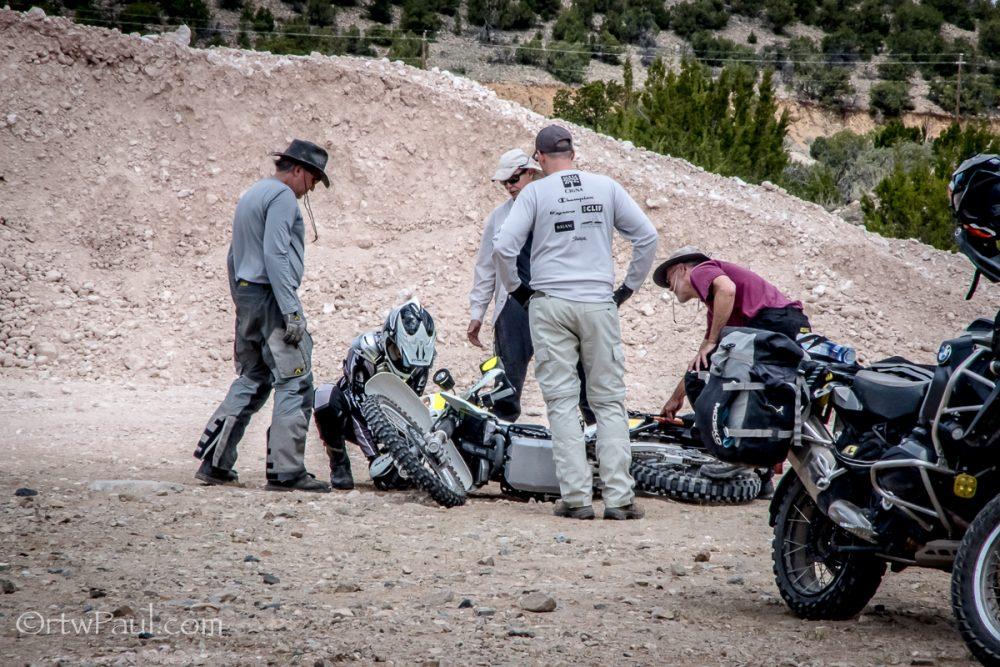 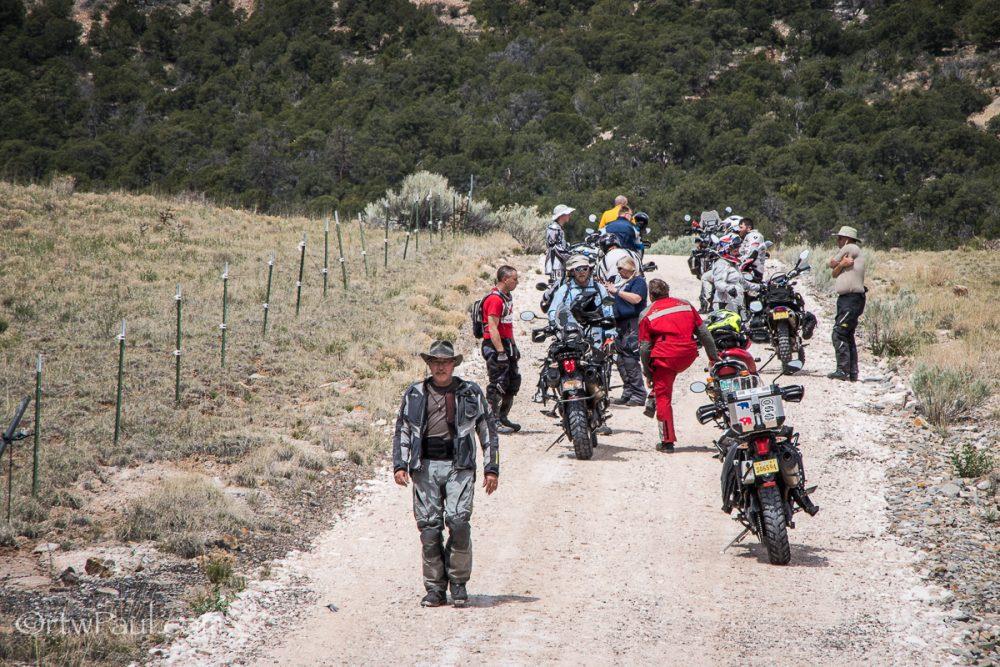 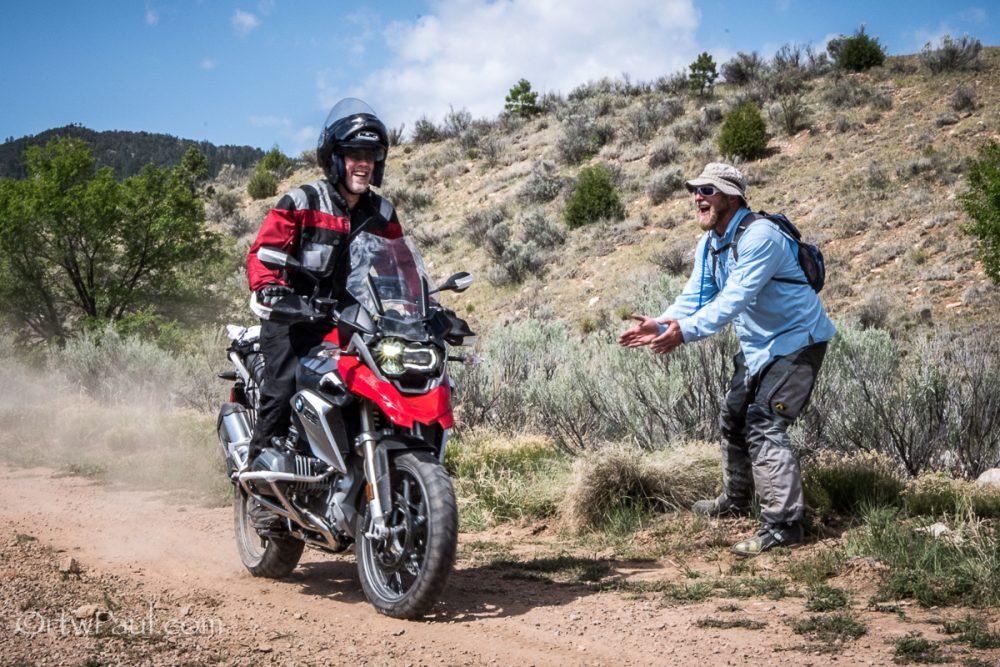 But much like the previous day, nothing dramatic happened. We all had small challenges here and there, and some exercises were a little trickier than the others – but in the end, everything was doable. I was sure I’d come off going down a steep hill using my front brake – but I didn’t. I was certain I would end up on the ground doing those rear wheel skids – but the bike stayed upright. I was convinced I couldn’t do the figure of eight on dirt, but with the help of Louise, surprisingly, I did.  And I was absolutely positive I’d come flying off the bike trying to ride the sand standing up – but Dusty’s cheers kept the rubber down. 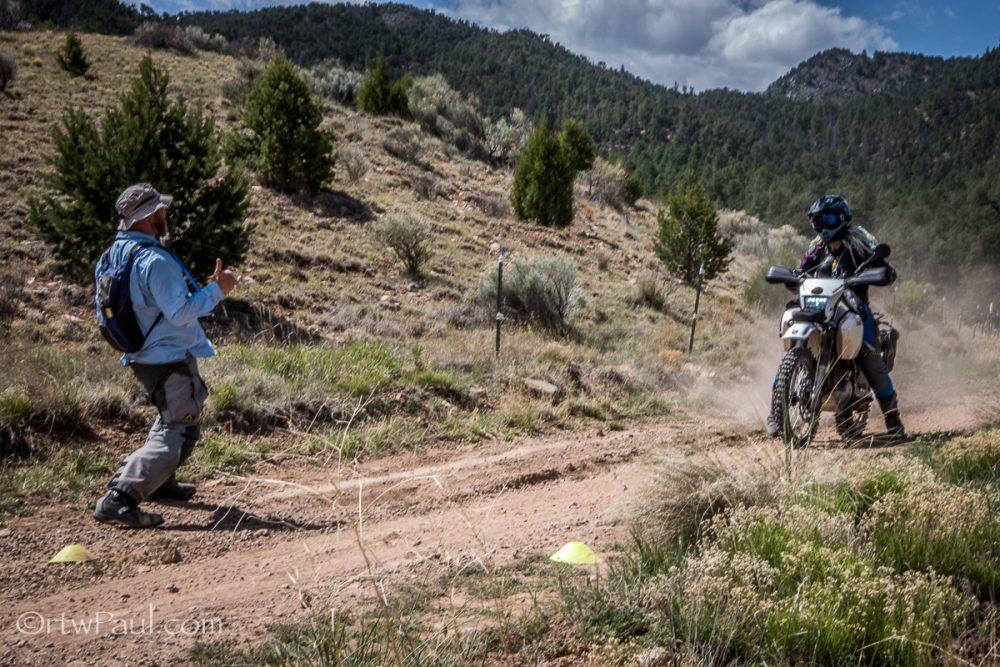 At the end of the day, exhausted but grinning from ear to ear, I’d concluded that:

In a nutshell? Those two days with Dusty, Paul, Louise, and Kim have positively transformed my riding. The people, the atmosphere, the location and the curriculum were stellar, and Dusty’s talent to infect people with bubbling enthusiasm deserves a wow.

I did feel that a little more personal feedback after each exercise and at the end of the day would have been very valuable, but as this was a big class of 14 people it probably just wasn’t possible time-wise. Oh, and there’s one other serious problem with West 38 Moto training…you leave wanting for more!

Intrigued? Keep an eye out for an upcoming West 38 Moto Discovery Tour Review!